The artists from the 1970s and 1980s around the world achieved dazzling results in the high price range, and a number of artists set new records within a year. In the summary about artists of Hong Kong Autumn Auctions, the price index of artists increased significantly in the 1950-1960s and 1970-1980s. In the last artists’ summary, we discussed the market performance of artists in the 1950-1960s. Then, ArtPro will continue to focus on the market performance of artists in the 1970-1980s from 2020 Hong Kong Autumn Auctions. In recent years, with the attention of various international galleries to young artists, the group of young artists has been given more and more opportunities to come to the fore and their performance on the set has become more and more dazzling. In the 2020 Hong Kong Autumn Auctions, artists sold a total of 410 lots in the 1970-1980s, with a turnover of US $63.1 million. 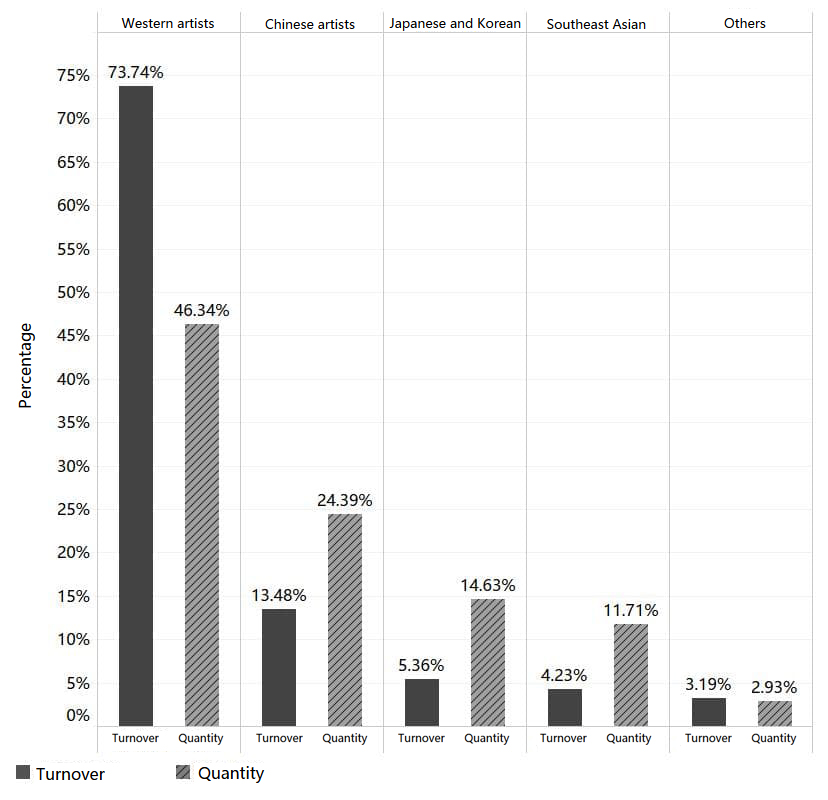 According to the ranking of artists from different regions in the 2020 Hong Kong Autumn Auctions in 1970-1980s, compared with the other three regions, the total transaction volume of artists in China (including Hong Kong, Macao and Taiwan) in the 1970-1980s was the most outstanding, with three artists with a turnover of more than US $1 million, followed by Western artists and Japanese and Korean artists, and the lowest in Southeast Asia in the 1970-1980s.

Western artists have made great achievements in the 2020 Hong Kong Autumn Auctions. According to the ranking of the total sales of artists in the 2020 Hong Kong Autumn Auctions from 1970 to 1980s, Banksy won US $11 million, Adrian Ghenie, Matthew Wong and Dana Schutz were all above US $5 million, while the other six artists all had a turnover of more than US $1 million . it can be seen that the lowest turnover for Top10 artists is more than US $1 million. 2.With the help of galleries, the artists from the 1970s and 1980s became more and more influential.

The remarkable promotion of artists in the secondary market is inseparable from the operation of their back galleries. Among the top 10 autumn auction sales in Hong Kong in 2020, 1970-1980s artists were boosted and blessed by galleries.With the operation of galleries and the promotion of the primary market, the social influence of artists gradually increased in the 1970-1980s, and the popularity in the secondary market is also growing day by day. Among them, Matthew Wong and Amoako Boafo were photographed for the first time and were photographed by Christie's, Sotheby's, Phillips, Phillips& Poly and so on. 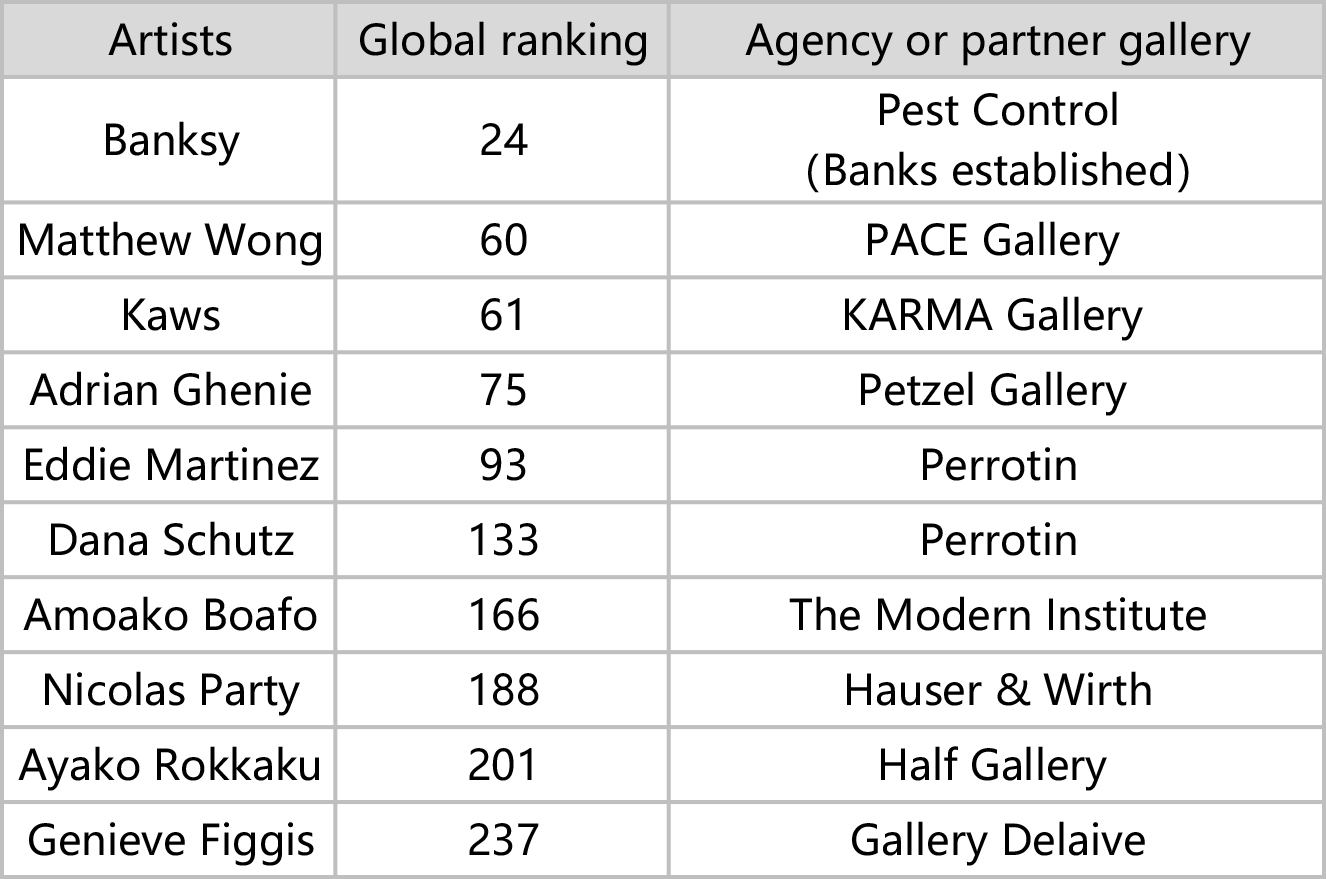 Among the artists from 1970 to 1980s, 12 artists set new personal records, among which Matthew Wong and Amoako Boafu both entered the auction for the first time. Matthew Wong is the only deceased artist on the list. The artistic genius committed suicide at the age of 35, and his auction craze surged in 2020: in October 2020, "Shangri-la" sold for $4.47 million, setting an auction record for an artist. In December 2020, Matthew Wong's "Sunset River" sold for $4.87 million, breaking the artist's world auction record again, nearly four times the pre-auction high estimate. 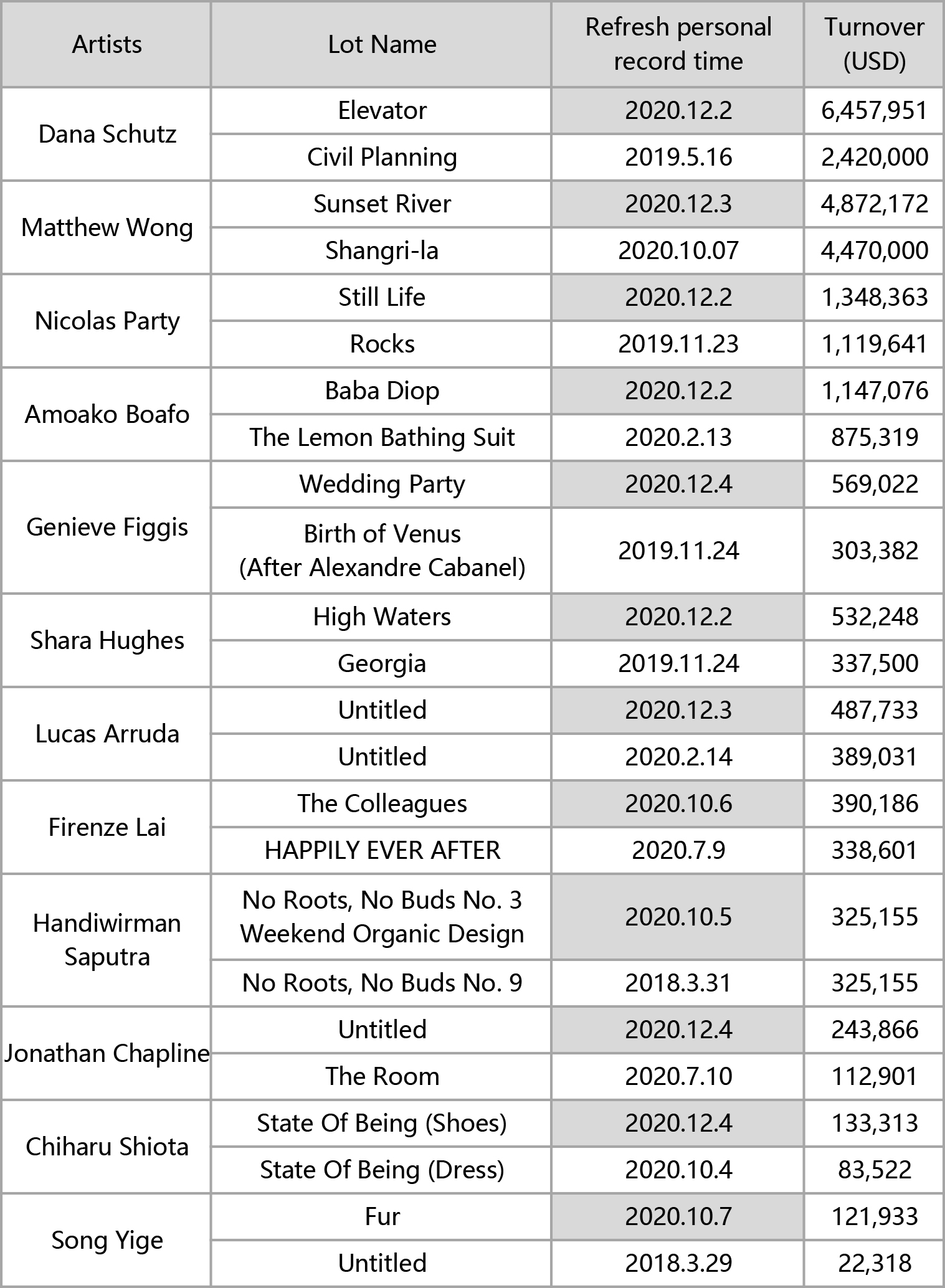 The Key Hong Kong auction houses all have works on sale for the first time. Christie's and Sotheby's in Hong Kong are both in the top two, with a share of 17.5% and 11.50% respectively. The other three auction houses, Hong Kong Christie’s, Bonhams and Hong Kong Poly, all account for less than 10%. Every auction house pays more attention to the works of artists from 1970 to 1980s, and the intensity and quantity of collecting works should not be underestimated. 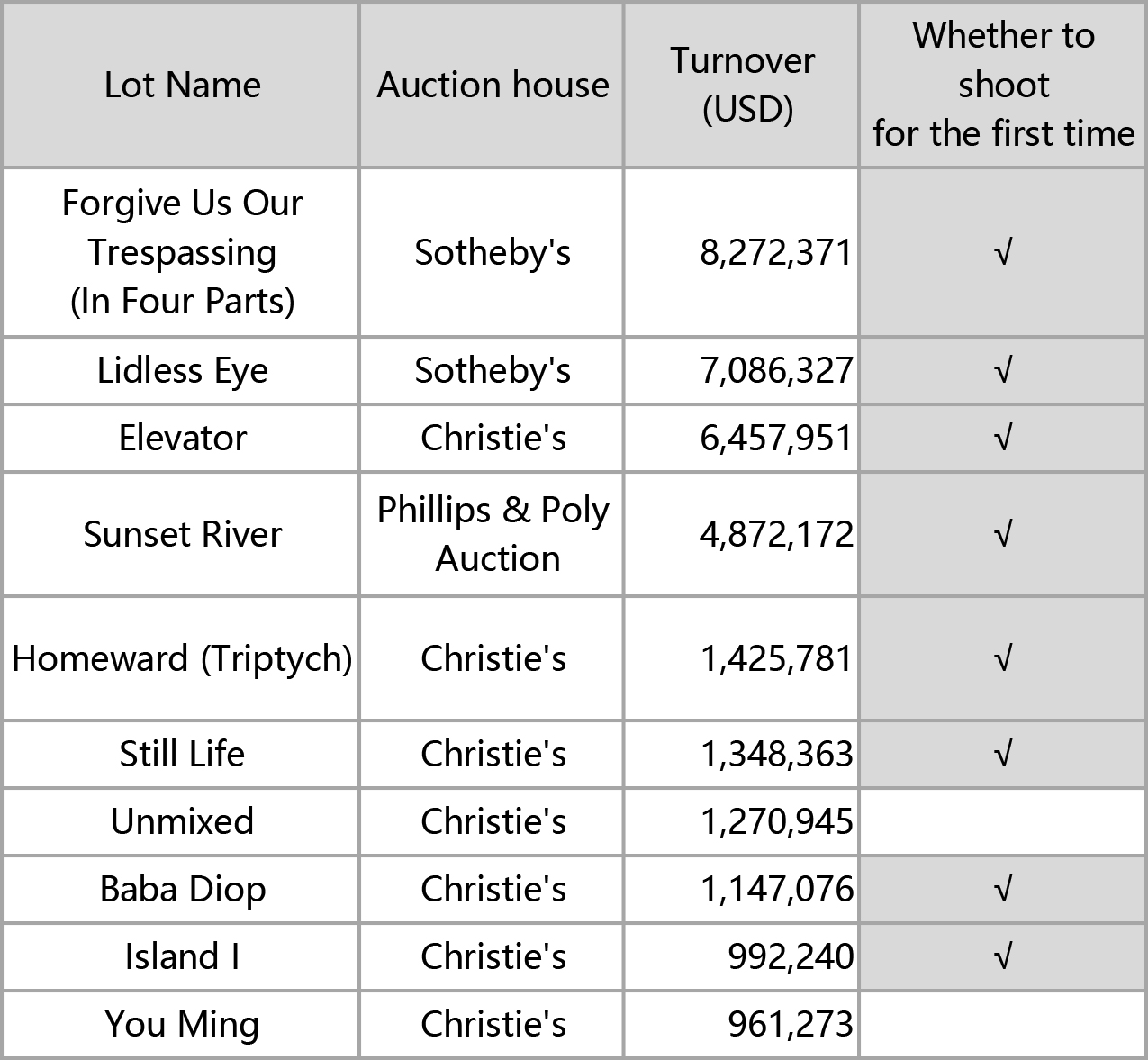 The circulation of repeated works is strong, and the average rate of return is 16.31% 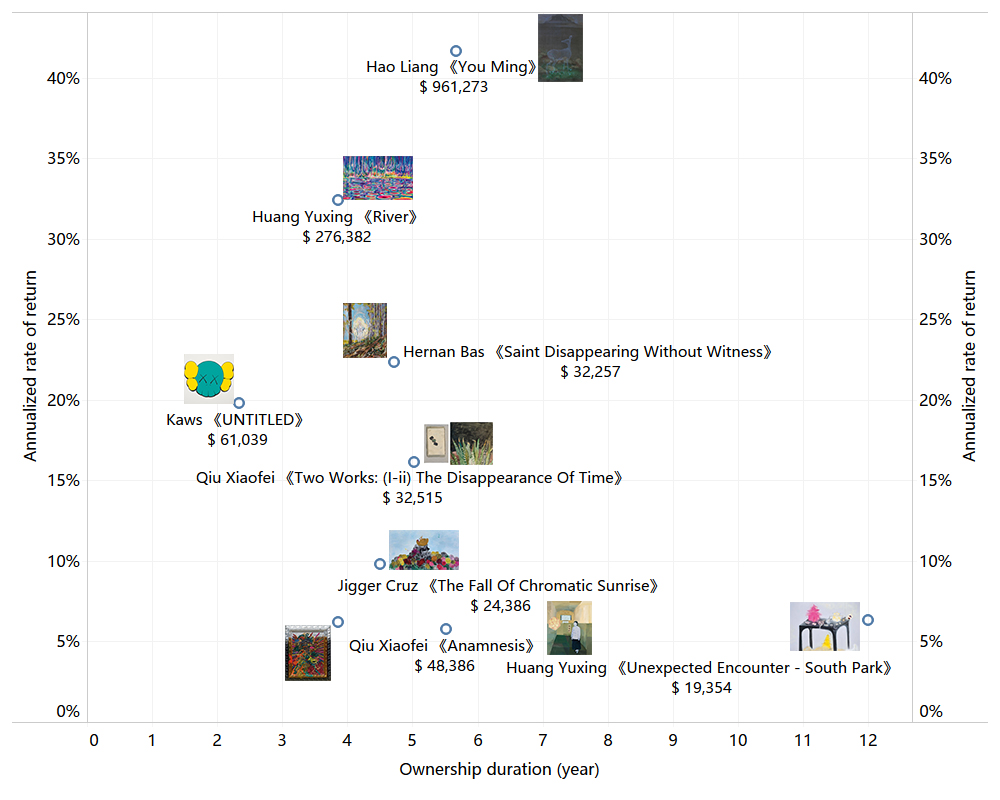 The annualized rate of return of some repeated works

The 2020 Hong Kong Autumn Auctions set sail in the haze of the epidemic in 2020. Against the background of many challenging factors, artists performed strongly on the auction stage in the 1970-1980s, showing an upward trend in transaction volume, auction volume, ranking of world artists, and so on; at the same time, good news spread frequently by artists in the 1970-1980s, and 12 artists set a new world record, and its market explosive power should not be underestimated. We will pay attention to the market dynamics of the artists from 1970 to 1980 about how they will perform in 2021.