Over the past decade, the total value of modern and contemporary art sales in Hong Kong has increased significantly, from US $276 million to US $951 million between 2011 and 2020.Before 2015, it only reached its peak in 2013, exceeding US $517 billion. The total volume of transactions has increased year by year since 2017, and the performance in 2020 is outstanding, creating a new high in nearly a decade, reaching $951 million. 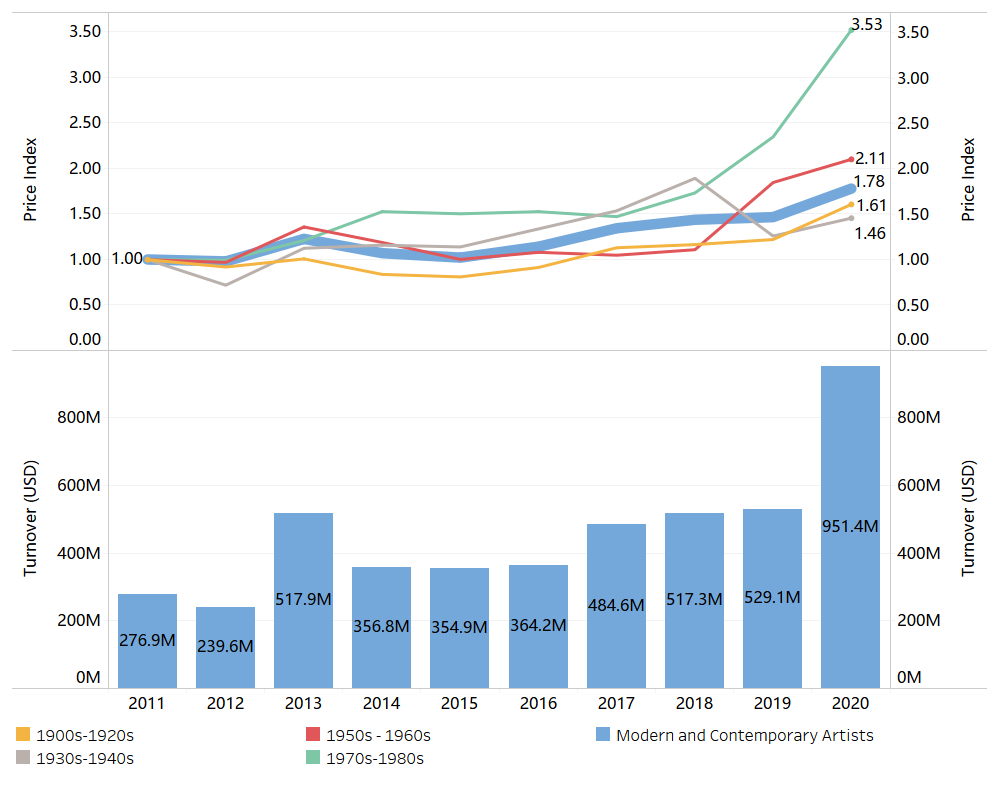 According to the observation of Artpro Market Research Center, the price index of modern and contemporary art as a whole has less than doubled in ten years, showing a steady market performance. However, in the whole section of modern and contemporary art, artists of different ages have divergent performances. Four artists of different ages were born in 1900s-1920s, 1930s-1940s, 1950s-1960s and 1970s-1980s respectively. **Their price index lines, by contrast, indicates that 1970s-1980s artists gain the most prominent increase, rising from 1 up to 3.53 in ten years, followed by 1950s-1960s artists (from 1 up to 2.11). **Both of their gains were higher than that in modern and contemporary art. 1900-1920 and 1930-1940 artists’ price index rose to 1.61 and 1.46 respectively, which did not fluctuate much and the market performance was stable.

Among the genres of works in Hong Kong Autumn Auction, the works of the 1950s - 1960s artists presented a variety of types, among which painting works occupied the first place with a proportion of 41.16%, and the rest were non-painting works, including prints, works on paper and sculptures, which accounted for 27.54%, 14.49% and 11.30% respectively.

From the materials, oil paint and acrylic have taken the majority, the rest are with various materials - glass fiber, neon lights, charcoal, gold foil, cotton and other materials are presented on the art in different approaches. Also, it reflects that the 1950s - 1960s artists are able to handle a variety of materials in achievement of the diversification of creation. In general, 1950s - 1960s artists in the Hong Kong autumn sales ranking are from all over the world, among which local Chinese artists take the first place with 44.59%, followed by Japanese and South Korean artists with 32.59% ranking the second, and western artists with 19.93% in the third place, indicating that Chinese artists are still the absolute main dealing force in the Hong Kong market. 2. Female artists account for 20% of the Top10 list, high price of single works is popular in the market

In the global feminist tide, contemporary female artists are playing an indispensable role in the global art market. With the development of society and the liberation of thought, female artists have gradually received unprecedented attention. Among the top10 most expensive 1950s -1960s artists at 2020 Hong Kong Autumn Sales, two were female, accounting for 20% of the total. 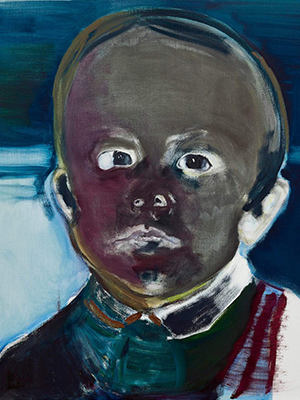 Cecily Brown and Marlene Dumas were among the top10 1950s -1960s artists in 2020 Hong Kong Autumn Sales with just a single piece of work. Bonus and Die Baba (2) (The Baby (2)) were sold for more than 3 million US dollars each, and the high price of a single work also injected a strong boost to the market for the two female artists.

As one of the most important artists in China's contemporary art circle, Zhang Xiaogang is a blue-chip artist with steady market conditions, whose market trend of the past two years has not shown outstanding performance. Despite an intensive release of several early works in the past few years, his market heat has cooled to some extent. Nevertheless, once the important works of Zhang Xiaogang are released, the market response is still strong. In 2020 Hong Kong Autumn Sales, Zhang Xiaogang's works are sold extremely well, highlighting the market confidence. 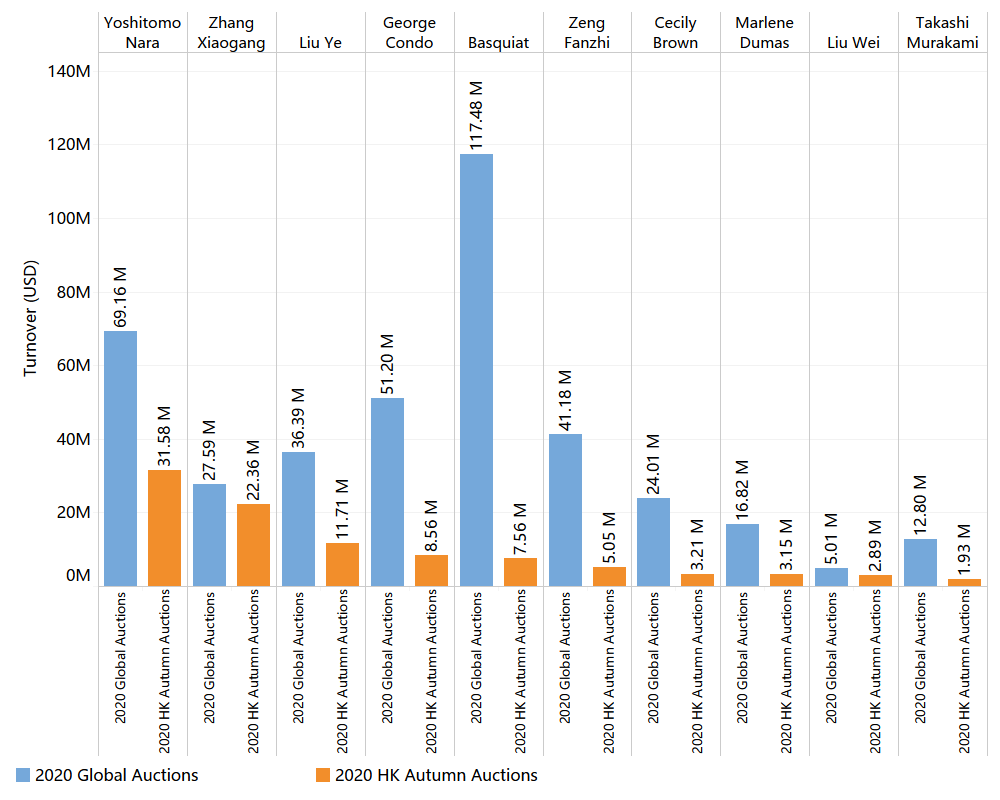 As a flagship character of Chinese contemporary art, Zhang Xiaogang is really popular in Hong Kong, his works are mainly traded in the Hong Kong market, the unit price of his works is also rising there, where shows high demand of Zhang Xiaogang's works and becomes his treasured place of income. 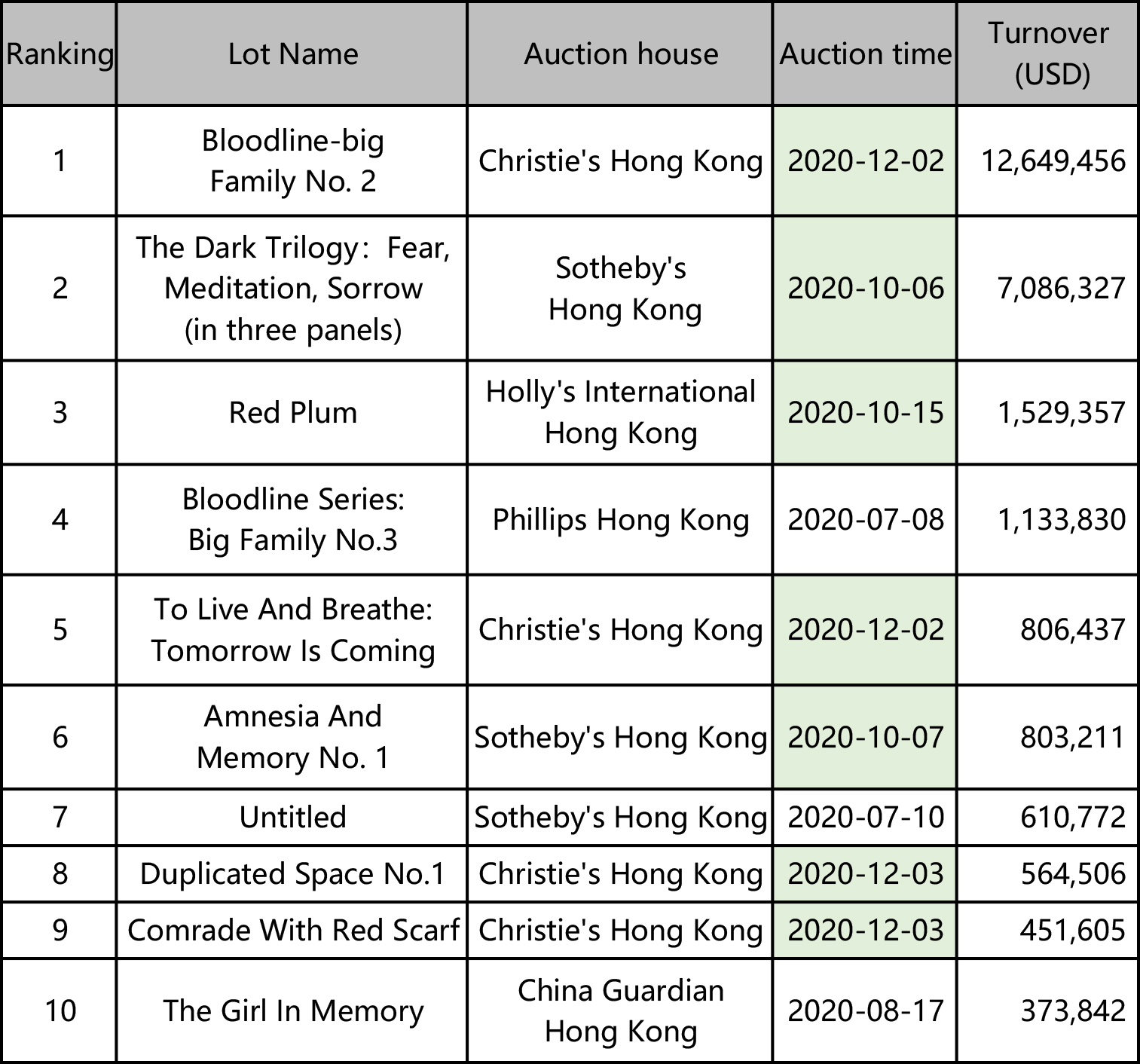 In 2020 Hong Kong Autumn Sales, 1950s-1960s artists have scored fine marks. Chinese contemporary artists are with significant value, still being the core of the art market in Hong Kong. Other 1950s-1960s artists from various countries artist also present a booming trend, varying on the creative novelty, on the materials, and getting mature in the whole world’s trend. It remains to be seen how this power of contemporary art will grow in the future. Next time, Artpro will present [Summary of 2020 Hong Kong Autumn Sales] on 1970s - 1980s artists and what kind of market focus they’ve formed, please stay tuned.