The global economic environment is facing huge challenges and volatility in 2020. The spreading of pandemic and the impact on the global capital market cannot be underestimated. In second half of the year, many countries have quickly launched unprecedented large-scale monetary policies in response to the international situation. However, there are still many uncertainties in the recovery process of the global economy. Under such background, the global art market has also setting sail in the gloom. The Hong Kong autumn auctions in 2020 is long overdue, and the horn was not officially sounded until October. A total of 22 modern and contemporary art auctions were been presented in Hong Kong this year. 1,458 lots were sold and 184 were unsold at a transaction price of HKD $41.20 (approximately USD $531 million). 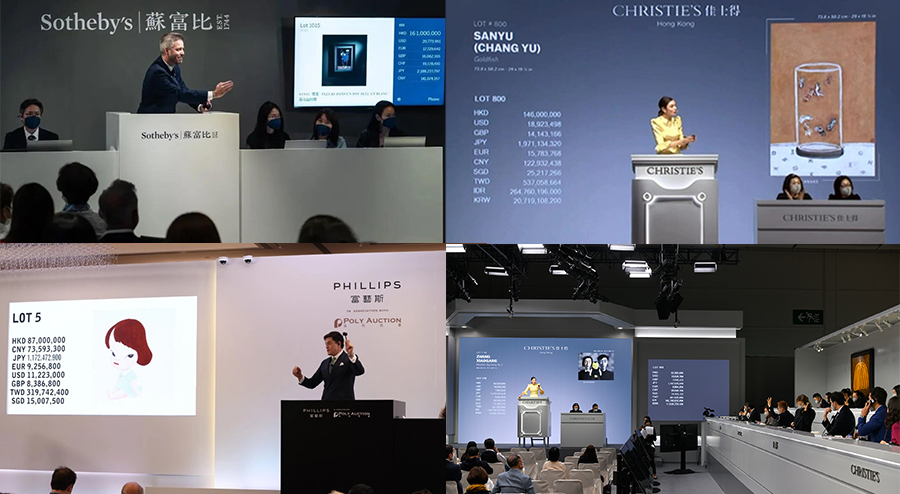 Now, ArtPro will show a series of summary of the 2020 Hong Kong autumn auctions from different perspective. High-priced lots are always under spotlight of the market. Let us focus on the list of 10 million dollar sales.

Looking at the Hong Kong autumn auctions in 2020, 9 lots were sold for more than 10 million dollars, with a total of HKD $1.336 billion (about 171 million U.S. dollars). These 9 lots are all paintings and all were sold at evening auctions.

I. Richter leading the autumn auction, has the lowest turnover in the past three years. 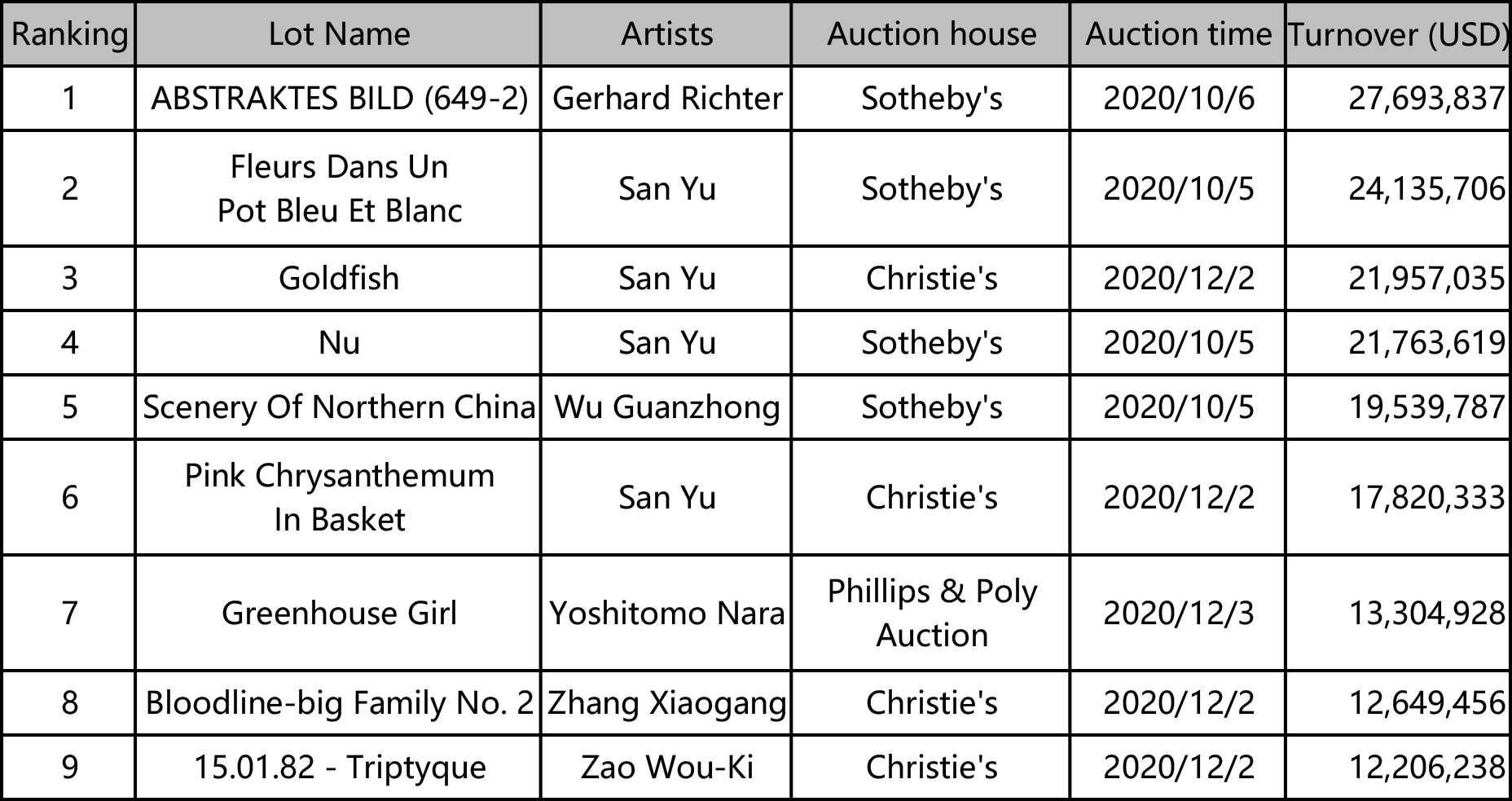 1.Richter leading with abstract painting of 215 million, surpassing Kaws as the most expensive Western art in Asian market

Judging by the performance of Top1 lot, Richter's ABSTRAKTES BILD (649-2) was sold for USD $27.69 million (HKD $215 million). This has made it not only champion of the season but also the most expensive Western art in Asian market, breaking the record of KAWS Album by Kaws at USD $14.78 million (HKD $116 million) in the Sotheby's Spring Sale in 2019. 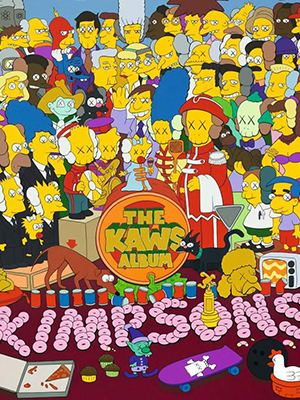 2. Lowest turnover of Top1 lot in the past three years

Although the results of this season's Top1 are remarkable for the record of Western art in Hong Kong, compared with other Top1 lots in Hong Kong autumn auctions in the past five years, the turnover this year is actually in downward trend. Compared with the performance of Zao Wou-Ki and San Yu in the previous two years, the gap is particularly obvious. 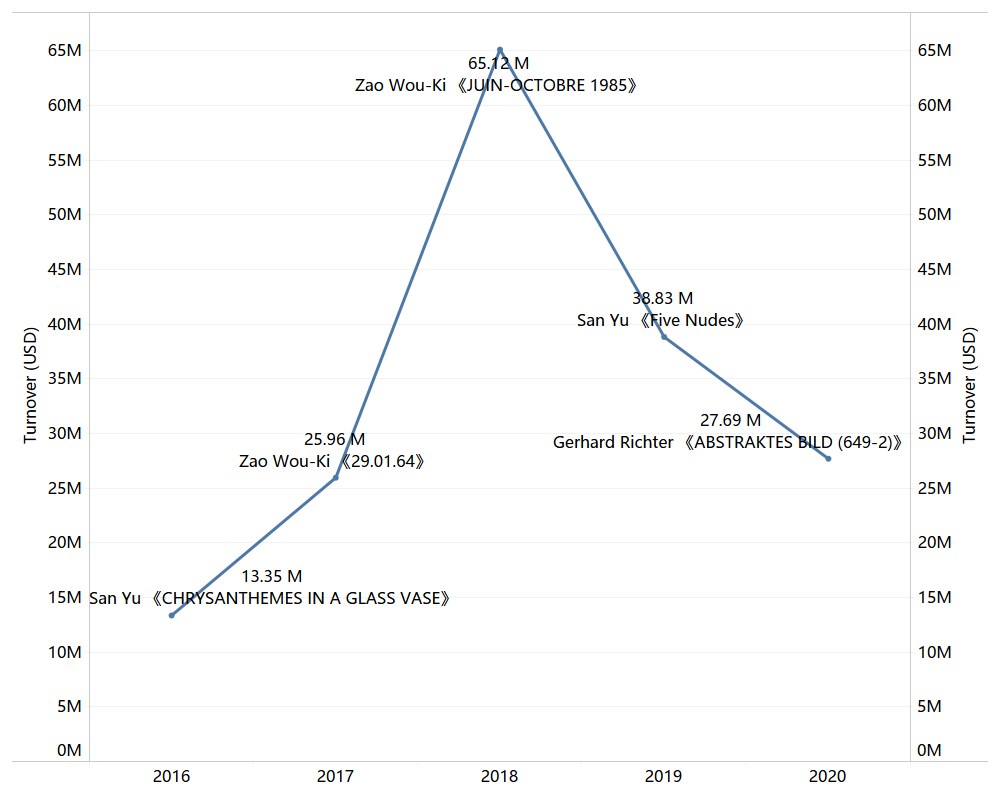 There are 9 works in the list 10 Million Dollar Sales. Chinese-French artists occupied 6 places, San Yu had four, Zao Wou-Ki and Wu Guanzhong each have one; the rest are Gerhard Richter, Zhang Xiaogang, Yoshitomo Nara, each occupied a seat. San Yu shines in the modern and contemporary art sector, the previous "Zao Wou-Ki Fever" was replaced by "San Yu Fever" in this year.

1. Three major subjects of San Yu have received over HKD $100 million respectively, with a contribution rate of up to 50%

In autumn auctions of this season, San Yu’s works have covered the three major subjects of flowers, animals, and nudes. All four works were sold over HKD $100 million, refreshing the artist’s Top 5, 6, 7, and 8 respectively. Goldfish also became the most expensive animal themed work of San Yu. In terms of turnover, all the tens of millions sales in Hong Kong have contributed a total of 171 million US dollars. The turnover of San Yu’s four works was 85.67 million US dollars, with a contribution rate of 50%. It can be seen that the Hong Kong autumn auction market is the income generation field of him. 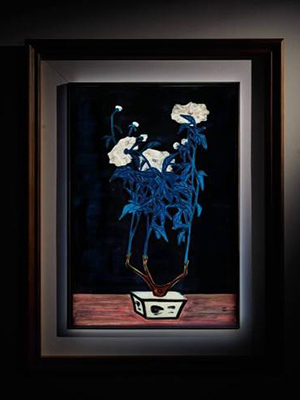 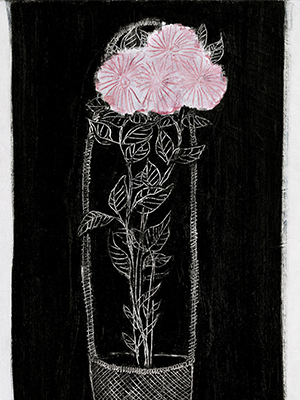 In recent years, Zao Wou-Ki has always been themost popular in Asian market. In 2018, there were three works worth more than ten million dollars, and his most expensive autumn auction work was USD $65.12 million. in 2019, there were two works worth more than 10 million dollars. His most expensive autumn auction work is USD $13.34 million. however, in the 2020 autumn auctions, only one was sold more than 10 millions dollars, and the highly anticipated triptych 15.01.82 - Triptyque only generated USD $12.2 million within the estimated price. 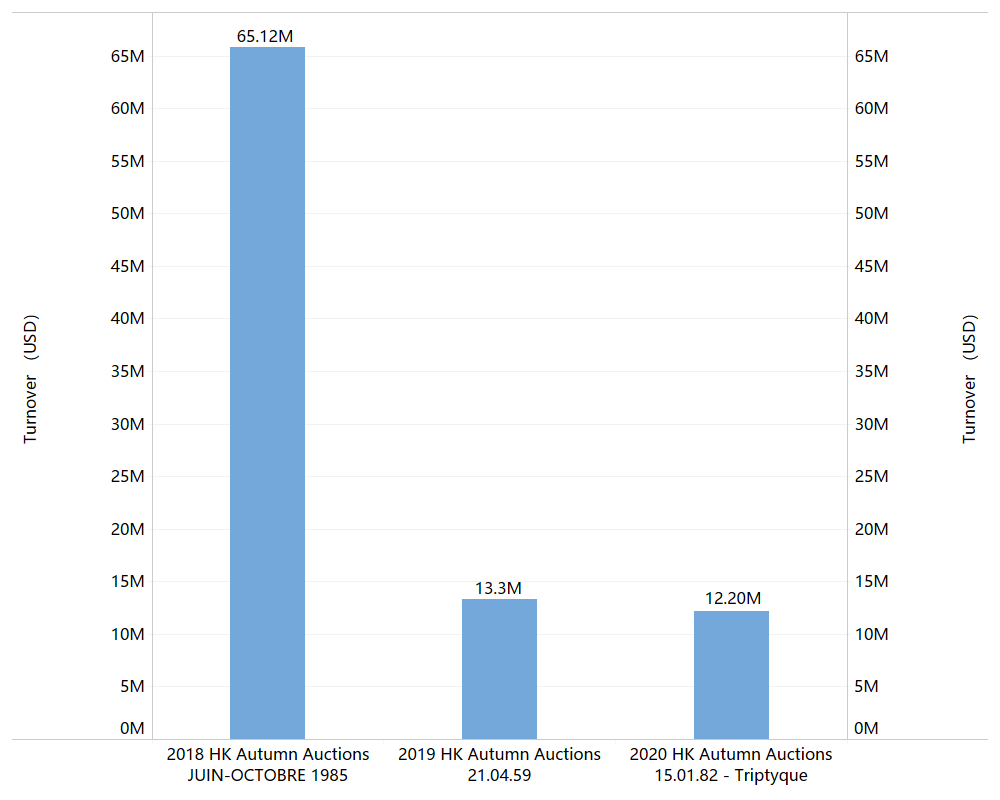 Another piece of 20.01.67 is Zao Wou-Ki’s top 3 evaluation of this season, has appeared in auction for the first time but end up unsold. The market performance was not satisfactory or manybe Zao Wou-Ki’s works have gradually entered a stable stage after the peak, whose the market trend has been weakened. 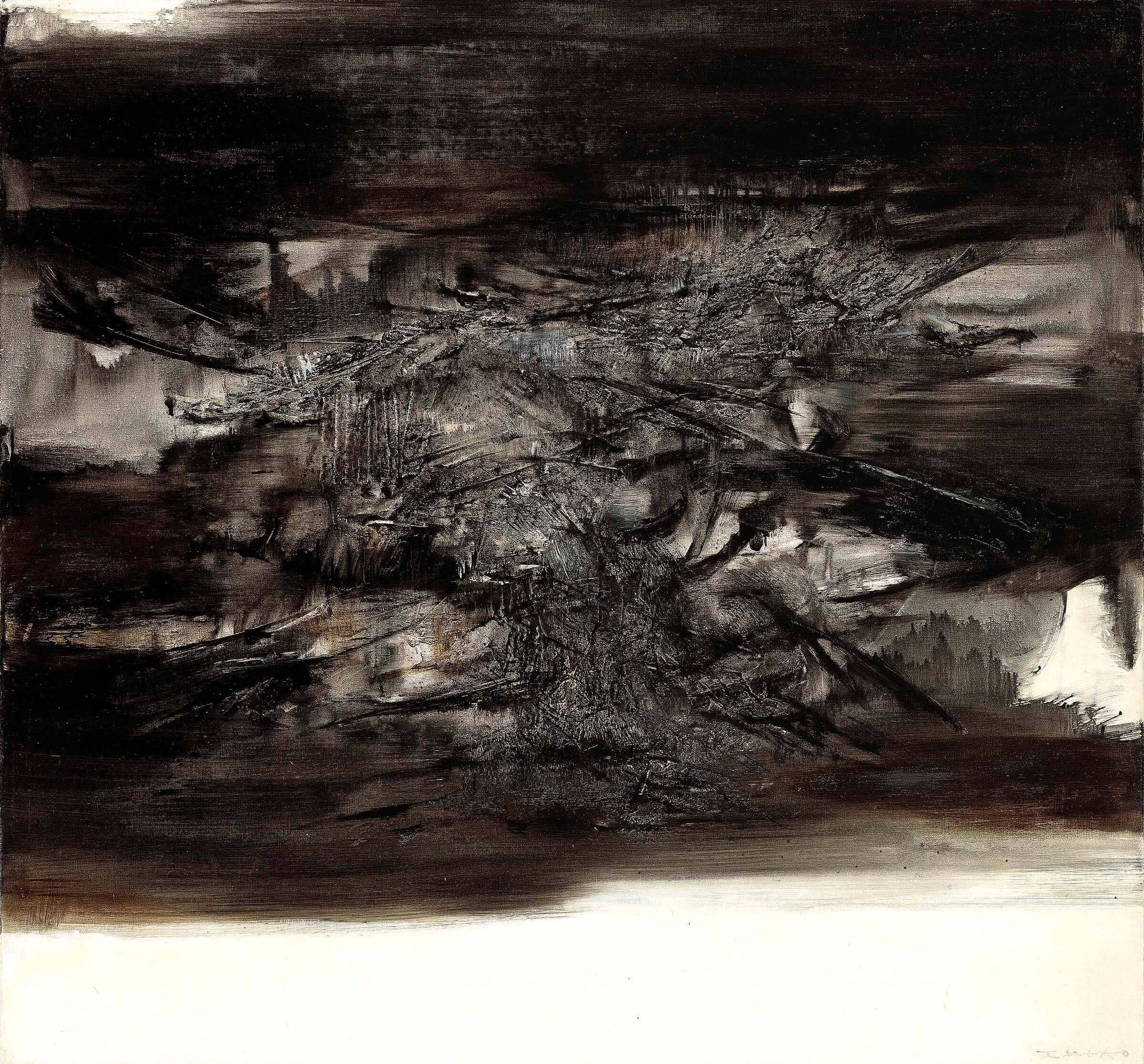 This season’s autumn auctions, Wu Guanzhong had 7 paintings on sale, all of which were sold. Among them, Scenery Of Northern China received HKD $151 million (approximately US$19.53 million), broke the artist's personal Top3.

III. Asian artists in 1950s become a new hot spot in the market

From the perspective of age distribution, whether it is the total transaction amount or the number of works, the important components of the list of 10 Million Dollar Sales come from artists in the 1900s and 30s; Richter, who was born in 1932, has occupied one place. There are two others born in the 50s, Zhang Xiaogang and Yoshitomo Nara are among the 10 million dollars list, their strength should not be underestimated. 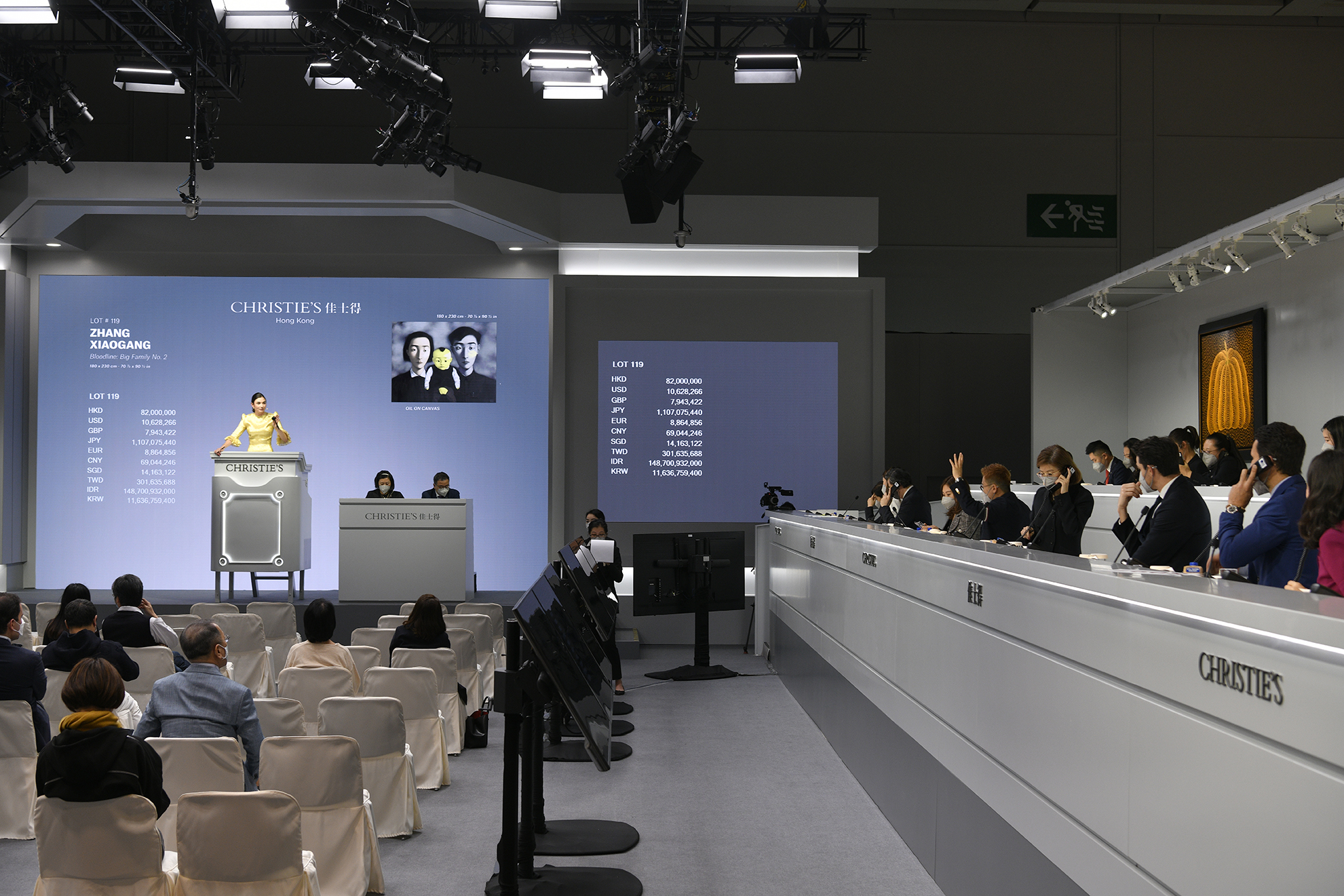 Nearly 80% of the lots are repeatedly sold, the annualized rate of return of San Yu's works is significant

In the 10 millions of dollars sales list, except for Richter's ABSTRAKTES BILD (649-2) and San Yu's Fleurs Dans Un Pot Bleu Et Blanc, two works were sold for the first time, the other 7 works were all repeated on auctions. Among them, Goldfish and Pink Chrysanthemum In Basket are both auctioned for the third time. The market's desire for top art collections remains the same. 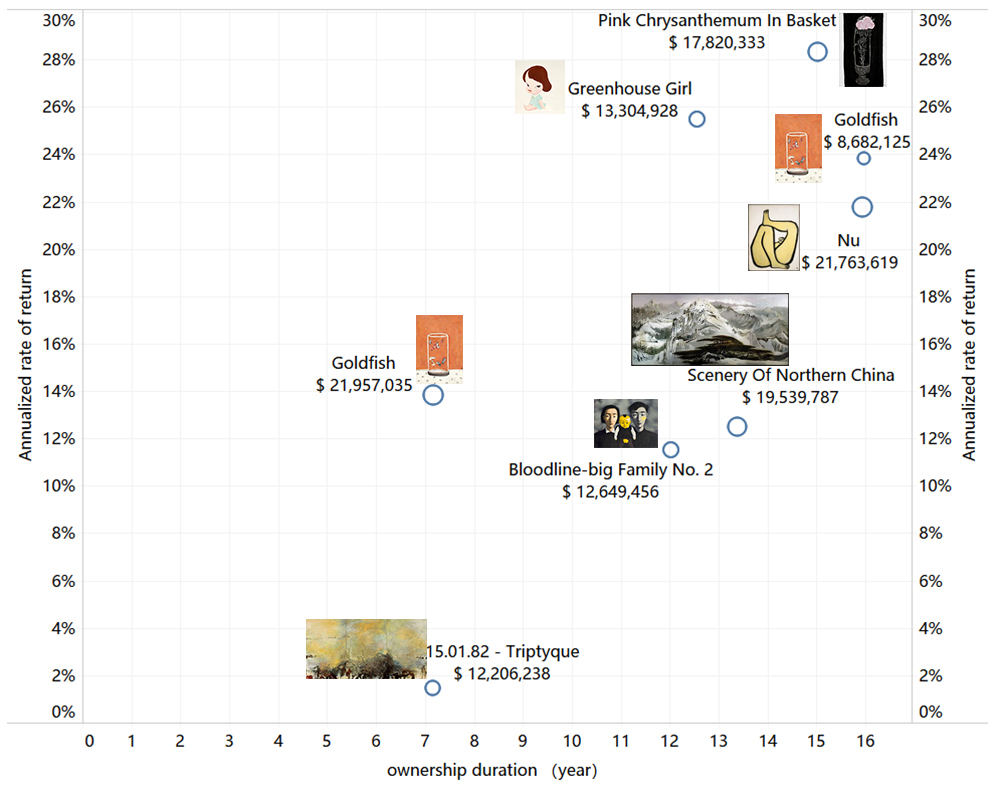 Except San Yu, Yoshitomo Nara's Greenhouse Girl has increased by 17 times in 13 years, with an annualized rate of return of 25%. The works of Wu Guanzhong and Zhang Xiaogang also performed extraordinary. 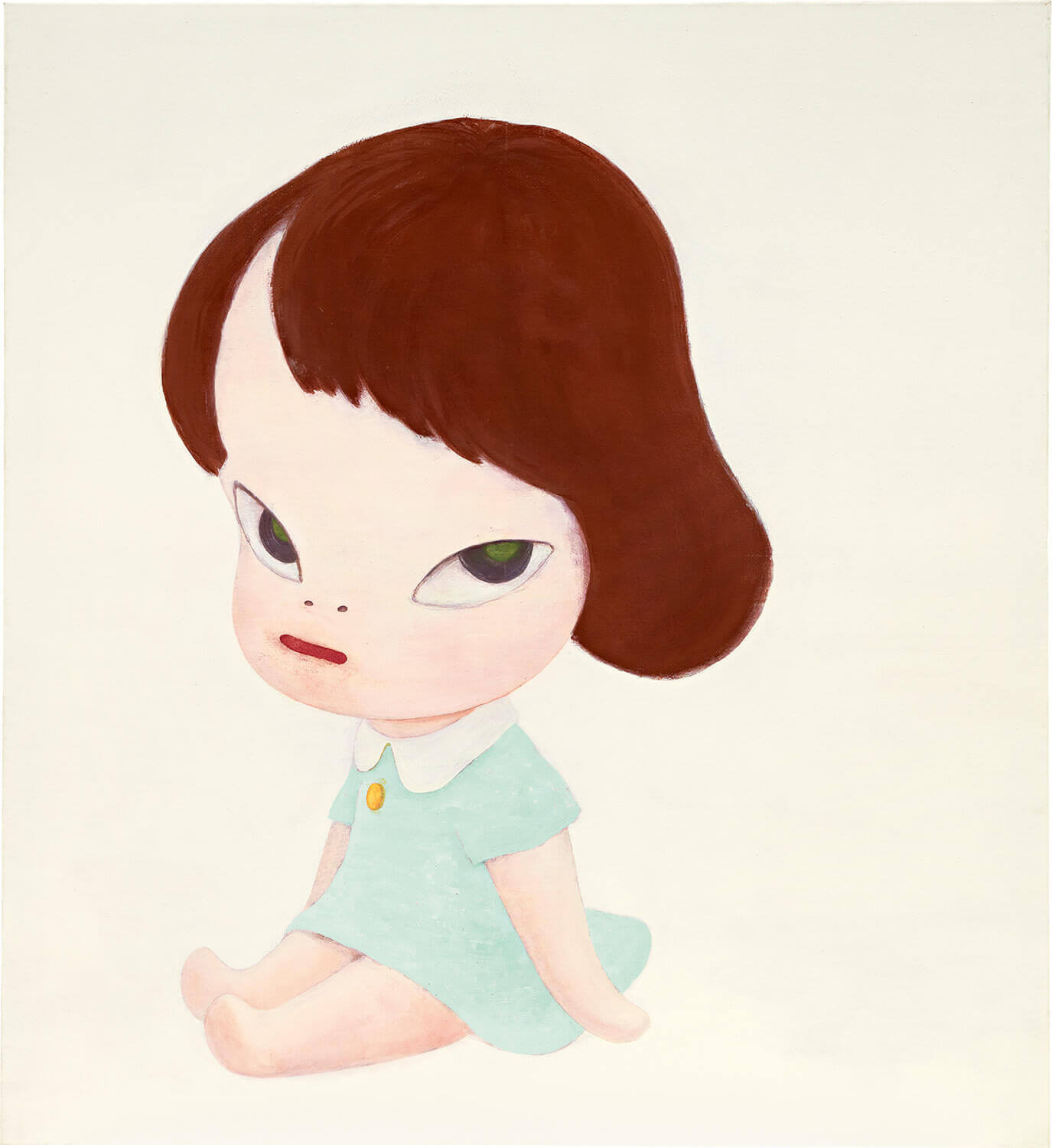 As one of the most important art markets in the world, Hong Kong market is not only in an international context, but also has its own particularities. The 2020 autumn auctions season has ended perfectly despite many uncertain factors, reflecting the resilience of the Hong Kong market and its own uniqueness. What kind of market signals are revealed by the ups and downs of artists in autumn auctions, and the various performances of artworks in autumn auctions? We will continue to explore the data behind the market. ArtPro will continue to release "2020 HK Autumn Auctions | List of 5 Million Dollar Sales", please stay tuned.