As one of the major cities of the art market, Hong Kong has various different auctions and attracts buyers from all over the world. The group of French-Chinese artists who have been particularly influential in the field of Chinese art, their creations coincide with Hong Kong's rich and diverse cultural environment. "The Three Swordsmen" who studied at France and San Yu have become the backbone of Hong Kong auction market due to their unique works and outstanding international influence. The spreading of their works, market cultivation, supplies and demanding, and differences in collectors' tastes, their sales in Hong Kong have been different over the years.

During the two decades of ups and downs, how have the market of French-Chinese artists going in the Hong Kong? After the October auction season in 2020, will the pattern of the four mainstream artists in Hong Kong remain unchanged? Now, please follow ArtPro to view the auction data of Zao Wou-Ki, San Yu, Wu Guanzhong, and Chu Teh-Chun and get a glimpse of their performance in Hong Kong over the years.

Part I. The price index of French-Chinese artists in the Hong Kong has risen over the years, the turnover in 2020 will reach its peak

Focusing on auction turnover in the past 20 years, the Hong Kong art market is getting more prosperous. It had a blew out in 2011, and the turnover reached by 36 times higher than 2000. On this occasion, the transaction volume of four mainstream artists——Zao Wou-Ki, San Yu, Wu Guanzhong and Chu Teh-Chun who studied at France began to grow steadily. The price index of these artists has risen all the way up, consistently outperforming other Asian artists (Chinese local, Japanese and Korean artists, Southeast Asian artists), European and American artists in the Hong Kong market, and far surpassed the stock index S&P 500. 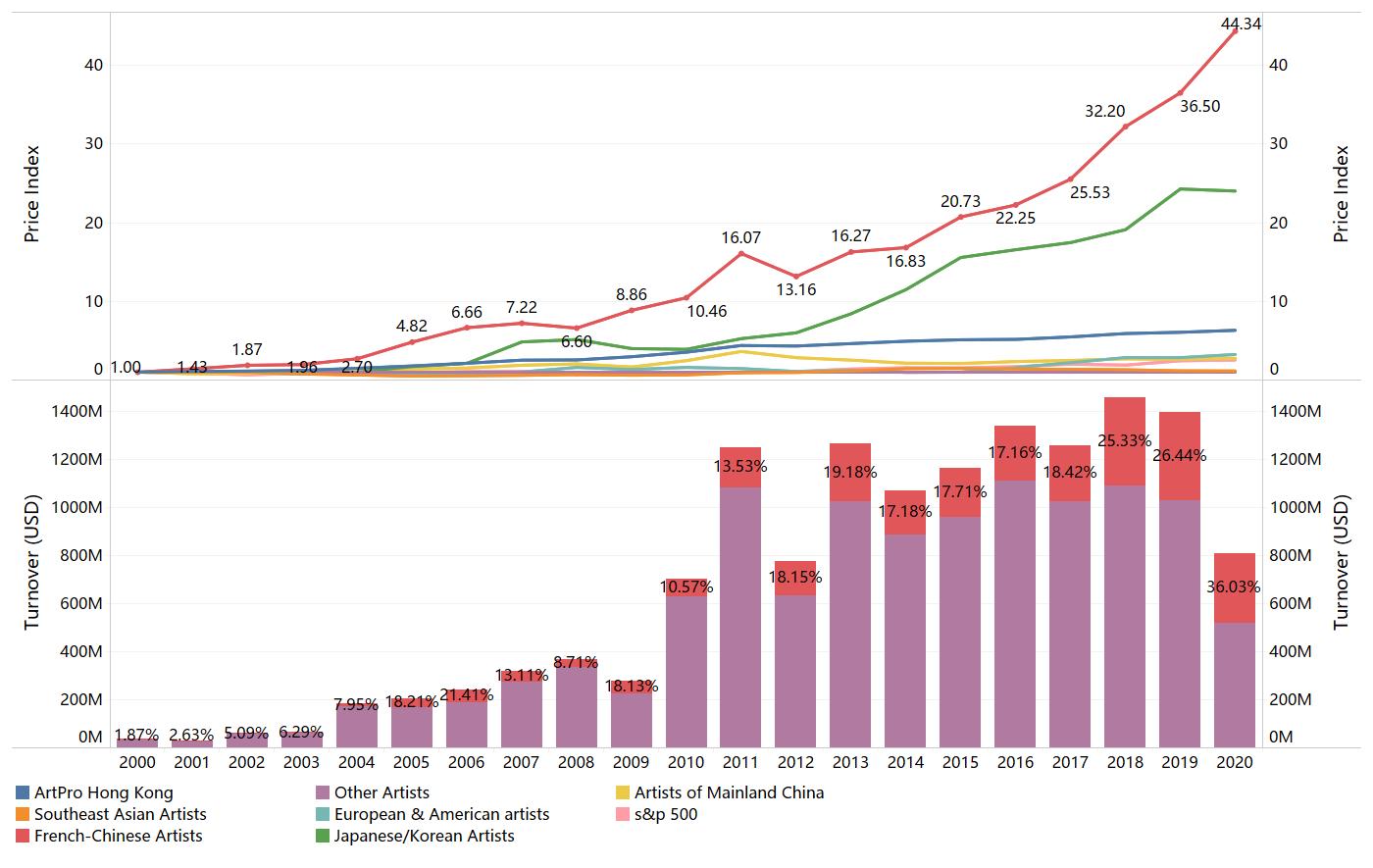 Under the pandemic of 2020, with the overall market sales shrinking, the four French-Chinese artists contributed 36% of Hong Kong's sales, reaching the peak of historical sales. The status of Zao Wou-Ki, San Yu, Wu Guanzhong and Chu Teh-Chun and their importance at the Hong Kong market is self-evident. Based on the year 2000, the price index jumped to 44.34 in 2020, showing an upward trend against the stream and showing the ability of the works of these French-Chinese artists to resist fluctuations in an unstable economic environment.

Part II. Under the market development, French-Chinese artists have their own advantages in the Hong Kong market As a leading city in Asian auction market, Hong Kong has a collection of the best works of artists from all ages, from both East and West. In the past years of turnover, Zao Wou-Ki stood out among all artists with a total turnover of more than USD $1.2 billion. Wu Guanzhong, San Yu, and Chu Teh-Chun are ranked as Top3, Top5, and Top6 respectively. Looking back at the auctions over the years, since 2004, Zao Wou-Ki has been among the top five in Hong Kong. He has won the championship 5 times including 2017, 2018 and 2019. In 2000, San Yu ranked as 73rd place in Hong Kong. Since then, his ranking has been rising in fluctuation. From beginning of 2020 to October, San Yu jumped to the top of the list, winning the top 1 position of turnover in Hong Kong for the first time, and becoming the artist with the largest increase in ranking among the four. Wu Guanzhong's ranking has been stable in the top 12, and had won the second place twice. Chu Teh-Chun’s ranking rose by 45 places in 18 years (from 2002 to 2020). Except for the trough in 2017, his ranking has remained high in recent years. 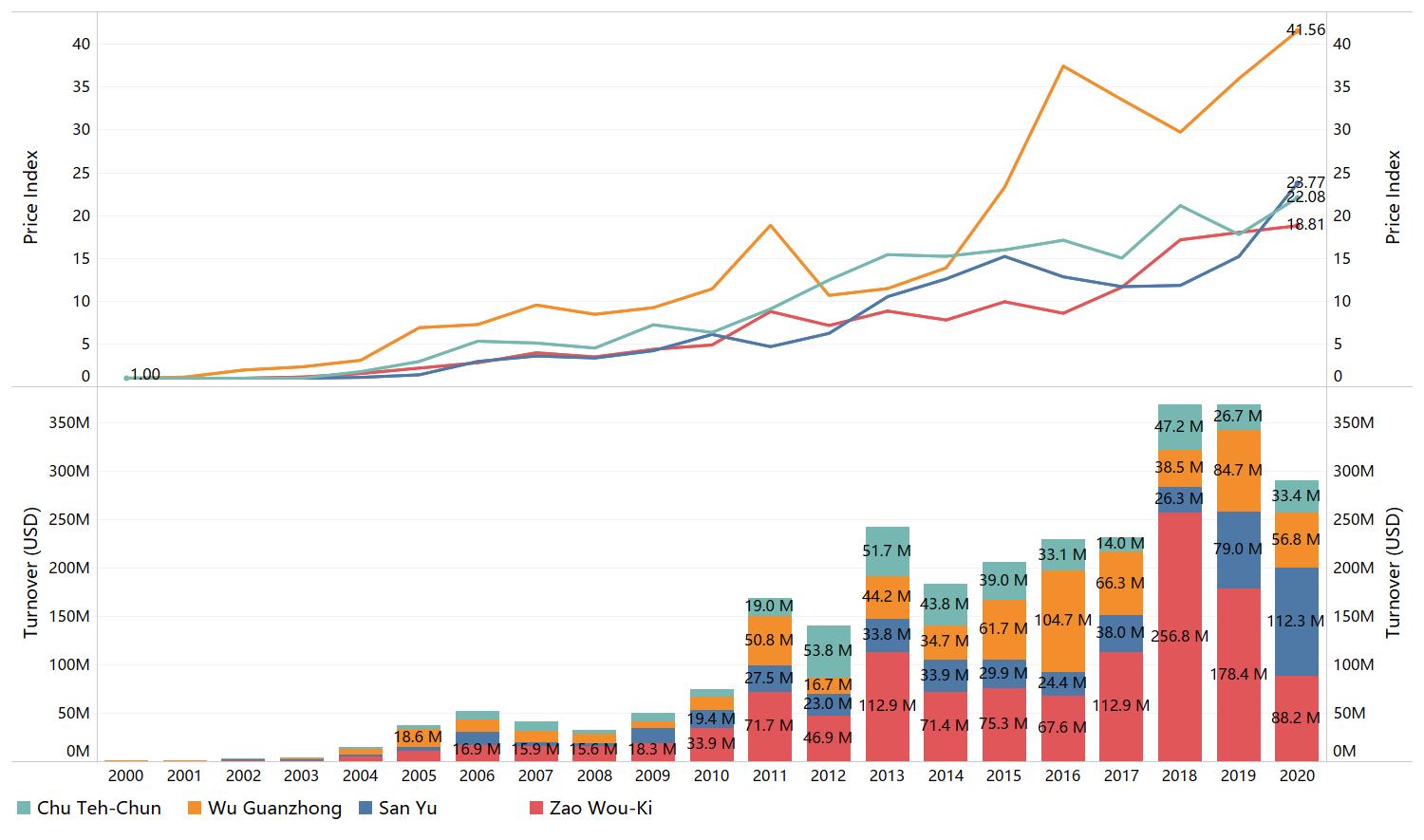 Part III. Data observation of the changes in the Hong Kong market of the four French-Chinese artists 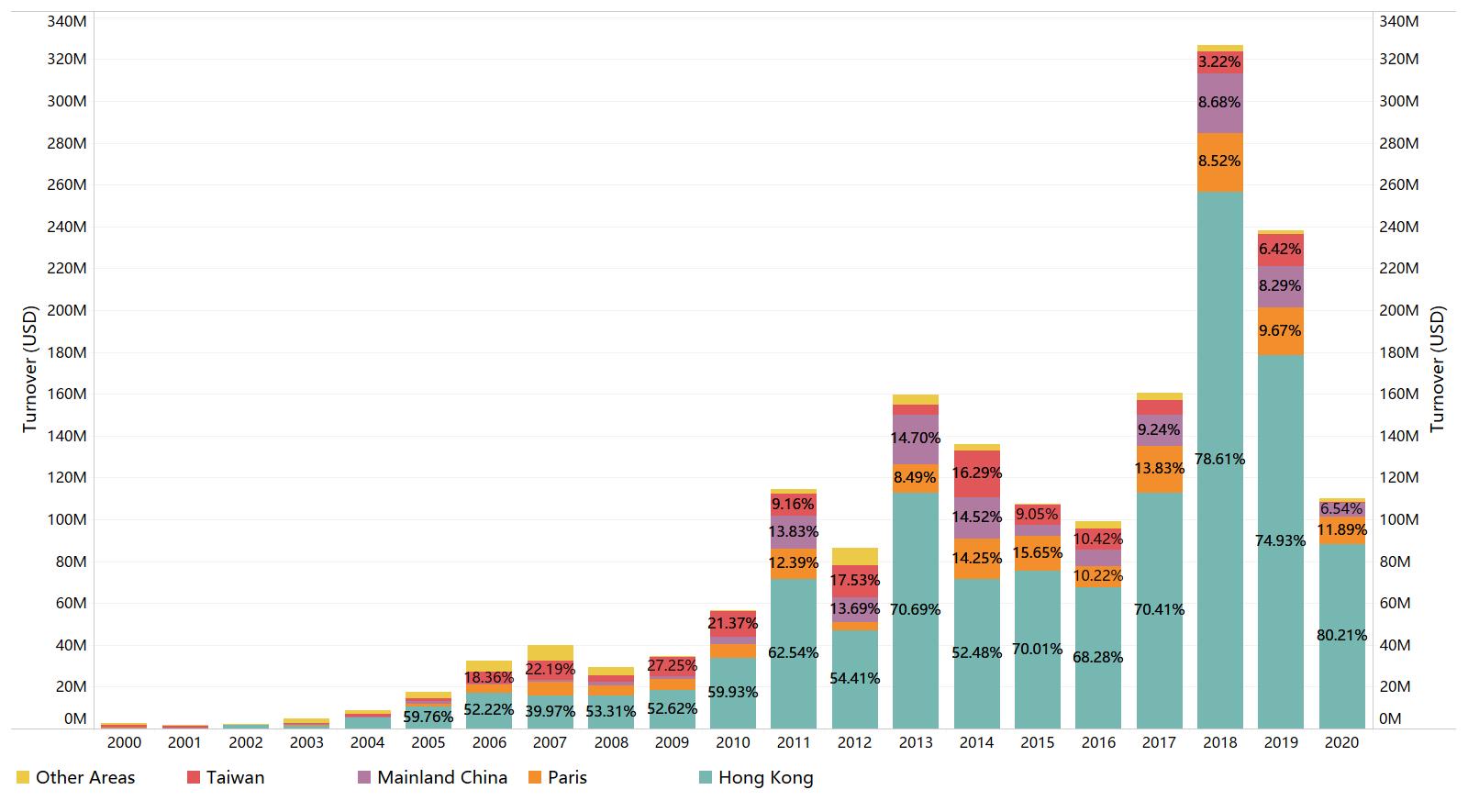 For the past 20 years, Hong Kong has been the main field for Zao Wou-Ki. His works had been promoting by French galleries and New York dealers during his lifetime, and his influence gradually increased in Asia in the 1970s. After being immersed in the art market by mainstream galleries for more than 50 or 60 years, Zao Wou-Ki has a huge international foundation in Europe, America and Asia. The Asian art market is concentrated in Hong Kong that has effectively increased Zao Wou-Ki's market share. In his Top20 list, 19 of them were sold in Hong Kong, and 10 of them sold over HKD $100 million. 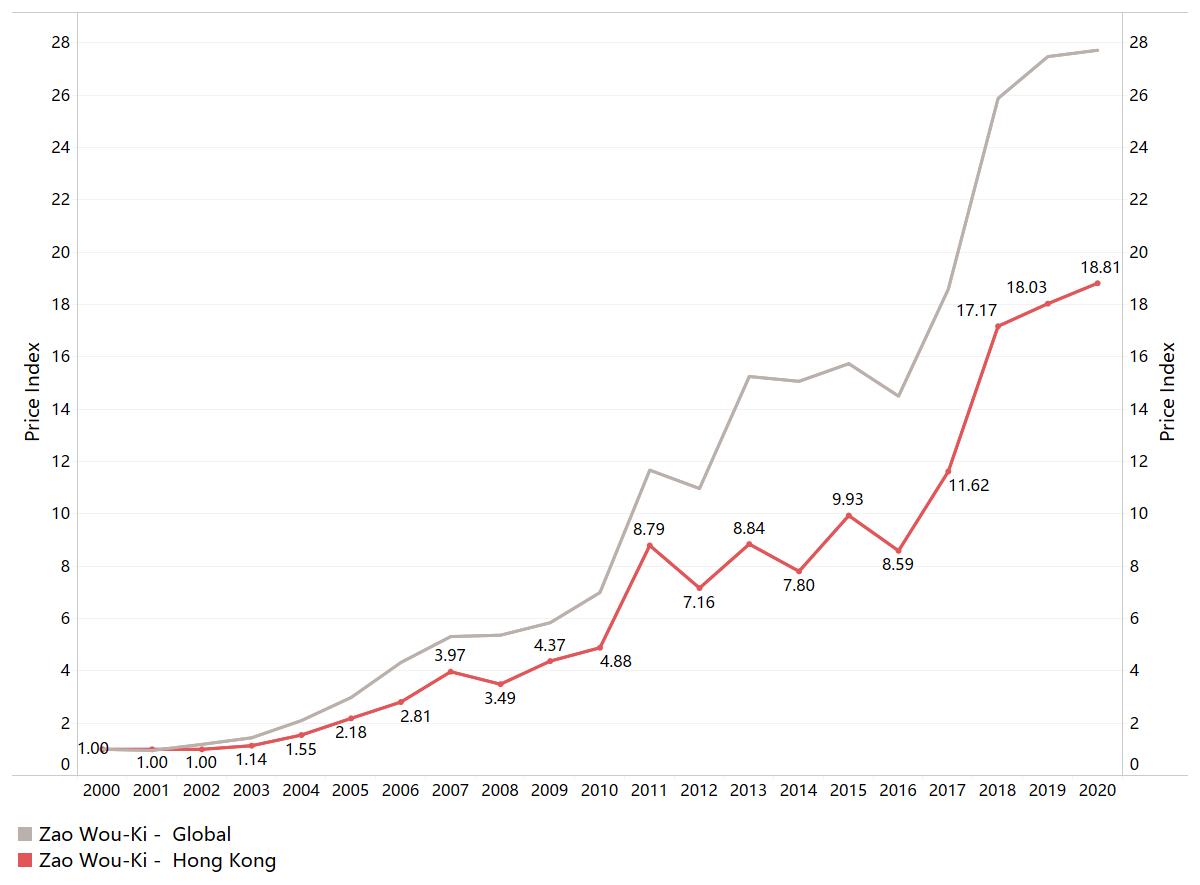 The growing of "Zao Wou-Ki fever" phenomenon can be seen from the rise of Zao Wou-Ki's price index. In 2011, this price index rose sharply with the general environment; in 2012, the Zao Wou-Ki Foundation had organized public institutions, private collectors, primary and secondary markets and other forces to promote Zao Wou-Ki's art. In 2018, with the opening of Zao Wou-Ki’s exhibitions in Hong Kong and Paris, the publication of the chronicle, and his centennial birthday in 2021, the price index continued to rise.

In 2018, Zao Wou-Ki's works sold more than 250 million US dollars in Hong Kong, and he has most share of more than 70% among the four French-Chinese artists. The oil painting JUIN-OCTOBER 1985 was sold at Sotheby's Hong Kong for a high price of CNY ￥510 million, setting the top record of Zao Wou-ki's until today, and became the most expensive lot in the Hong Kong market at the same time, also highlighted Zao Wou-Ki's fascination on Hong Kong's art market. In 2020, Zao Wou-Ki's price index in Hong Kong continued rising up, with 3 lots sold for over HKD $100 million in July. 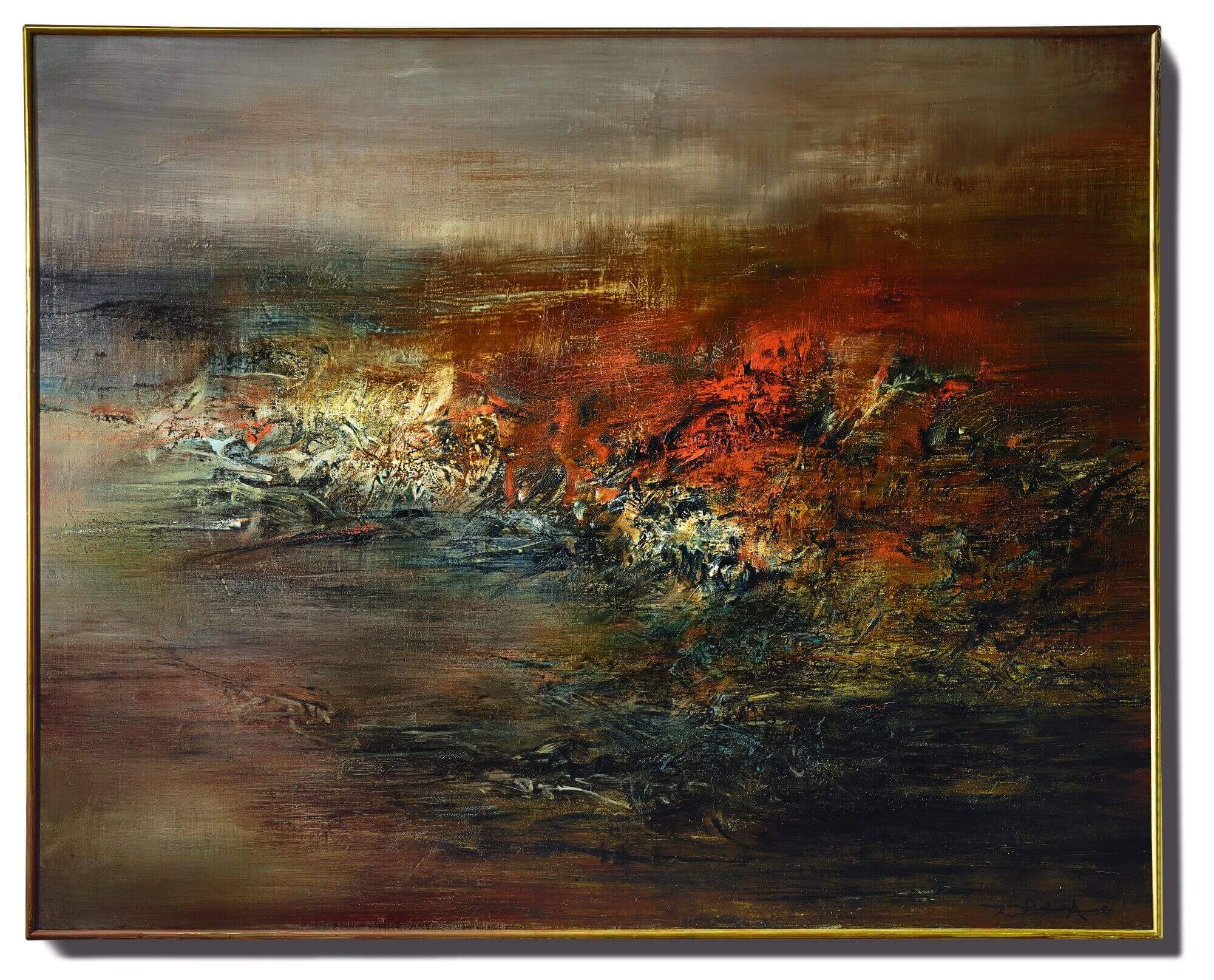 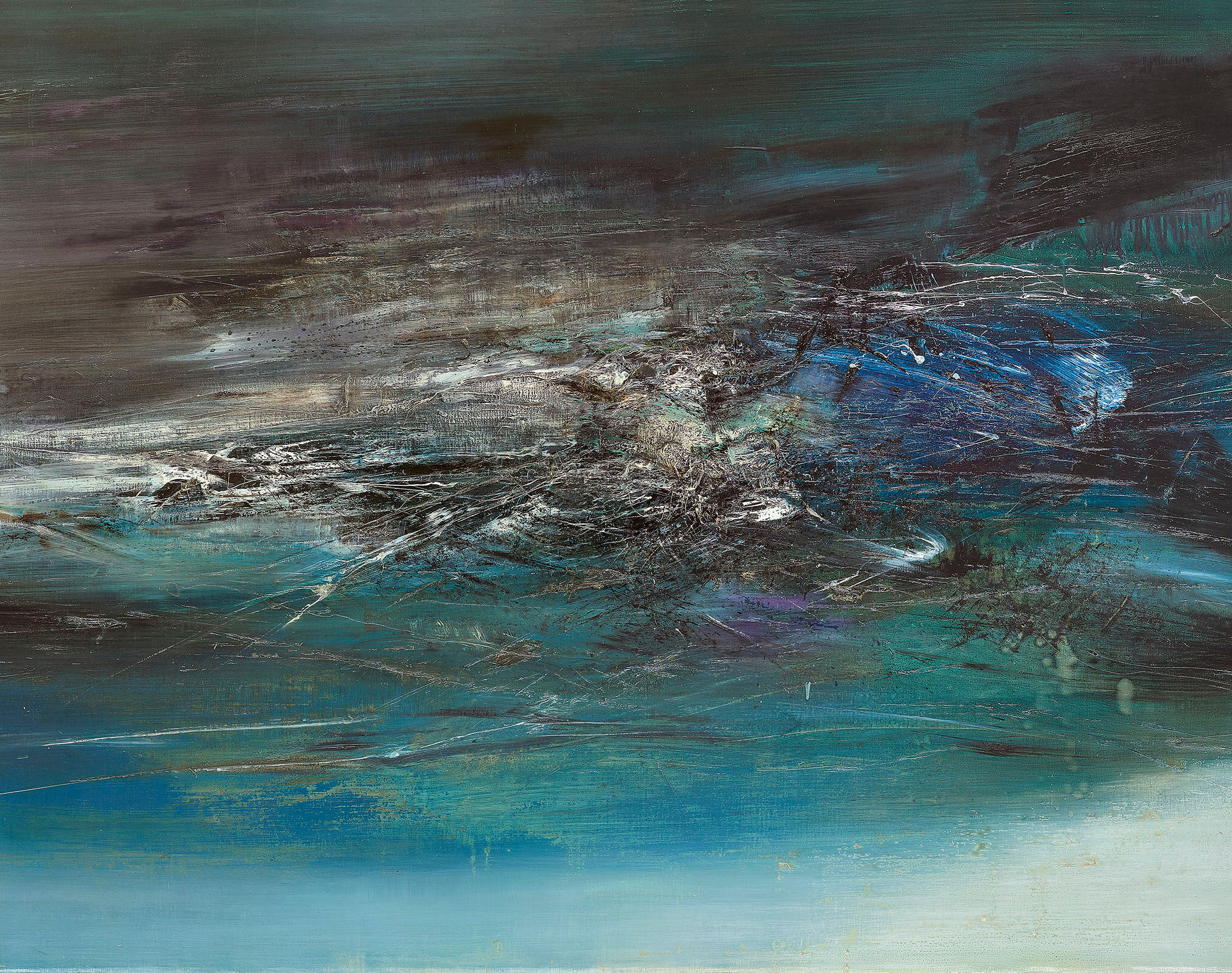 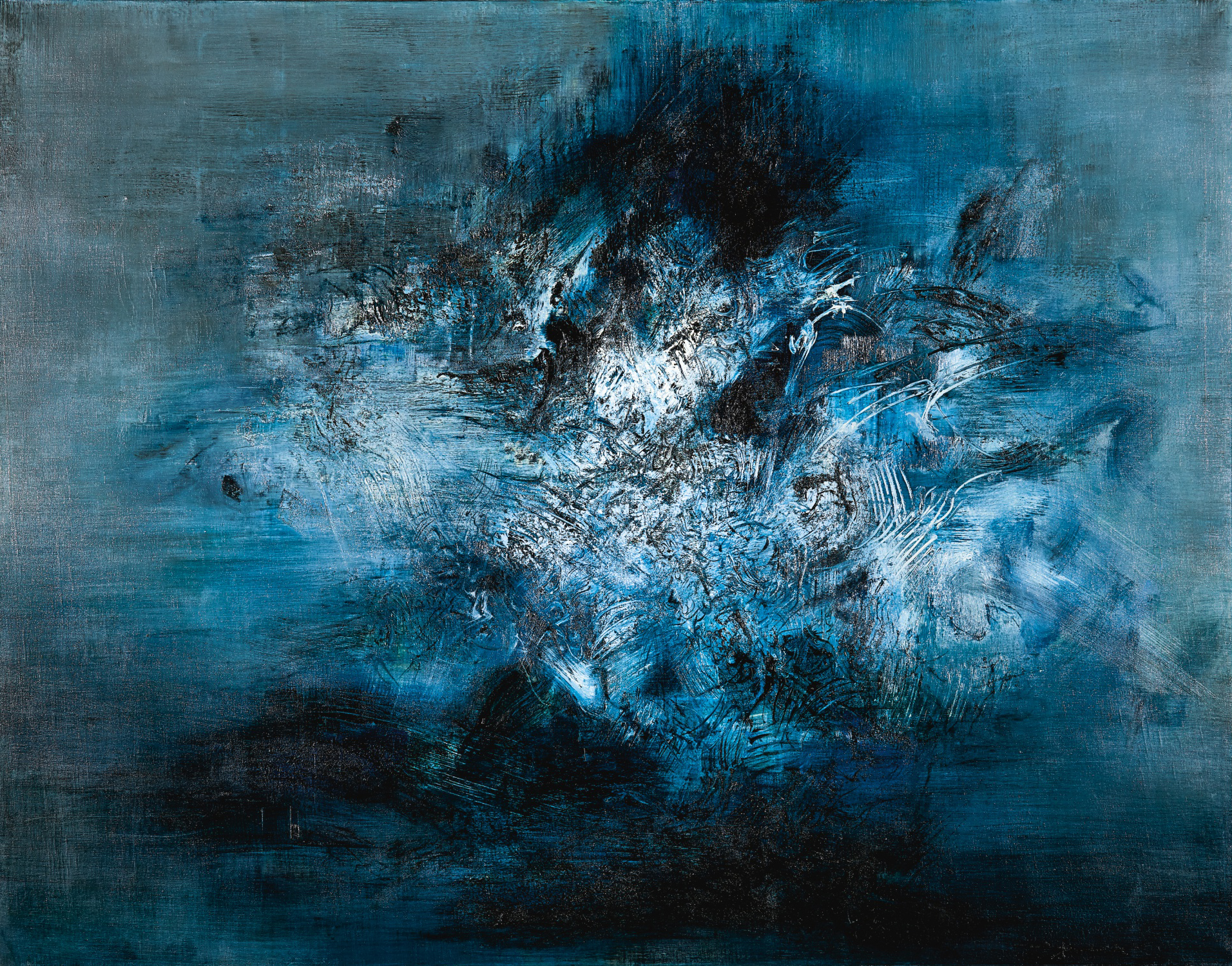 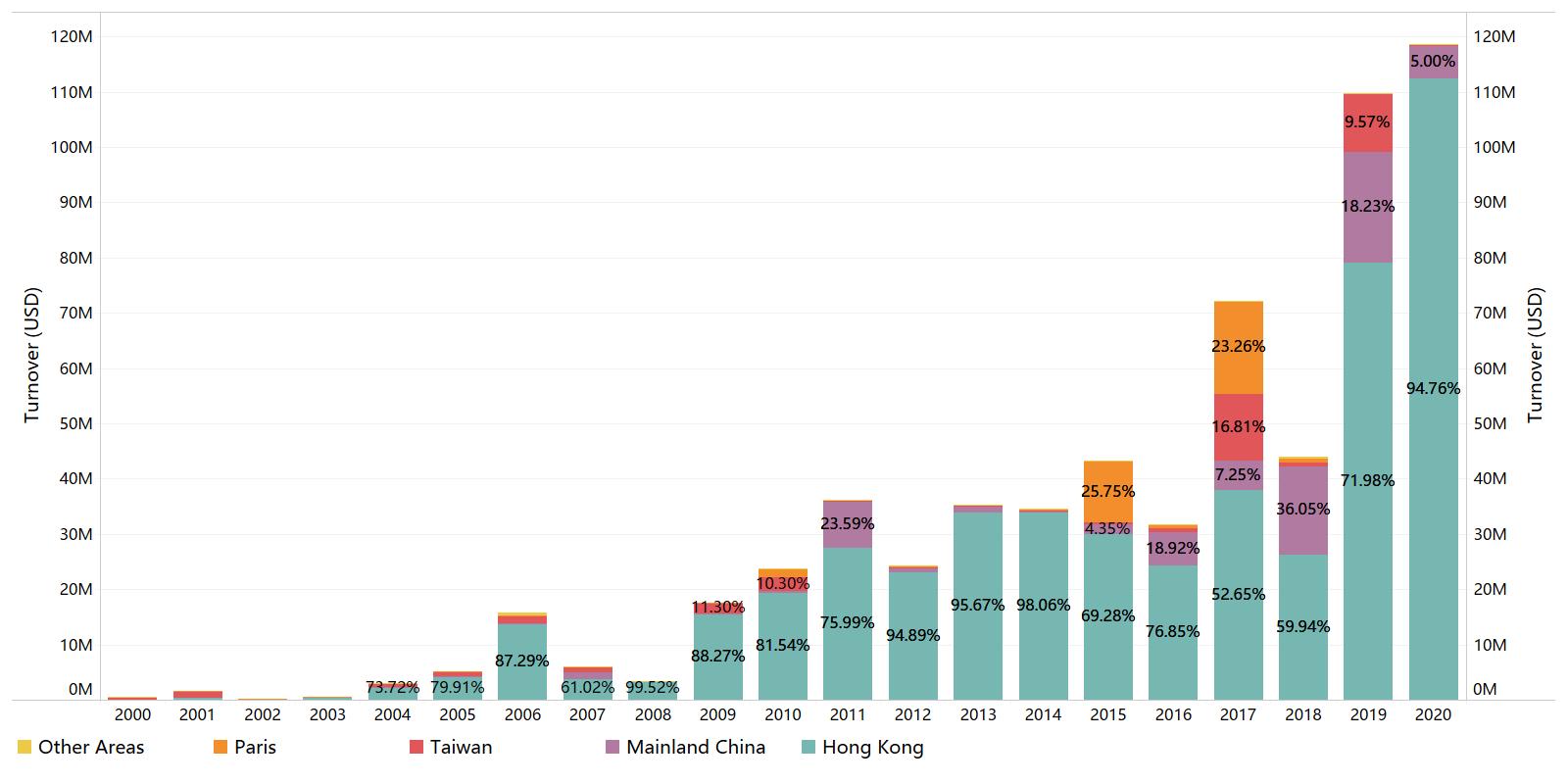 Location Distribution of Sun Yu's Auction Market From 2000 to 2020

San Yu lived in Paris, France, whose main market is in Taiwan. However, in the auctions of the past 20 years, Paris and Taiwan are not the major contributors to San Yu's turnover. Mainland China and Hong Kong are the main battlefields for the sales of his works, especially Hong Kong. Among San Yu's top 20 high-priced lots, 15 were sold in Hong Kong, and 8 of them reached over HKD $100 million. 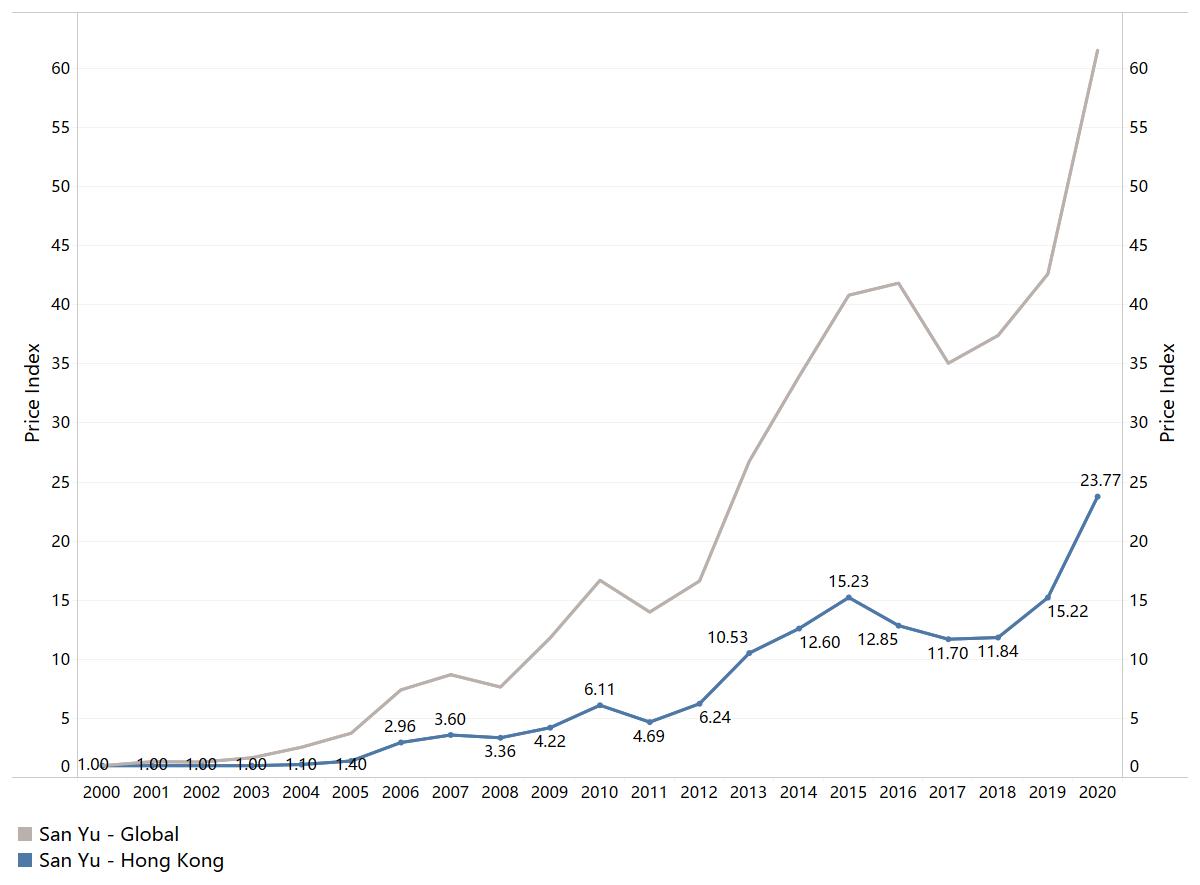 San Yu's price index in Hong Kong showed an upward trend with a 23 times increase in 20 years, and there is peak of the price index in 2015. The continued heating up of the Hong Kong market has also driven the improvement of other markets. In 2019, with the release of San Yu's masterpieces on the market, his turnover in Hong Kong has reached twice higher than the highest turnover in previous years. On October 5th, the work NU broke San Yu's record at Sotheby's Hong Kong for HKD $198 million. The auction record in 2011, on November 23, Five Nudes received a high price of HKD $303 million at Christie's Hong Kong, which continued to push the San Yu's market to a higher position. 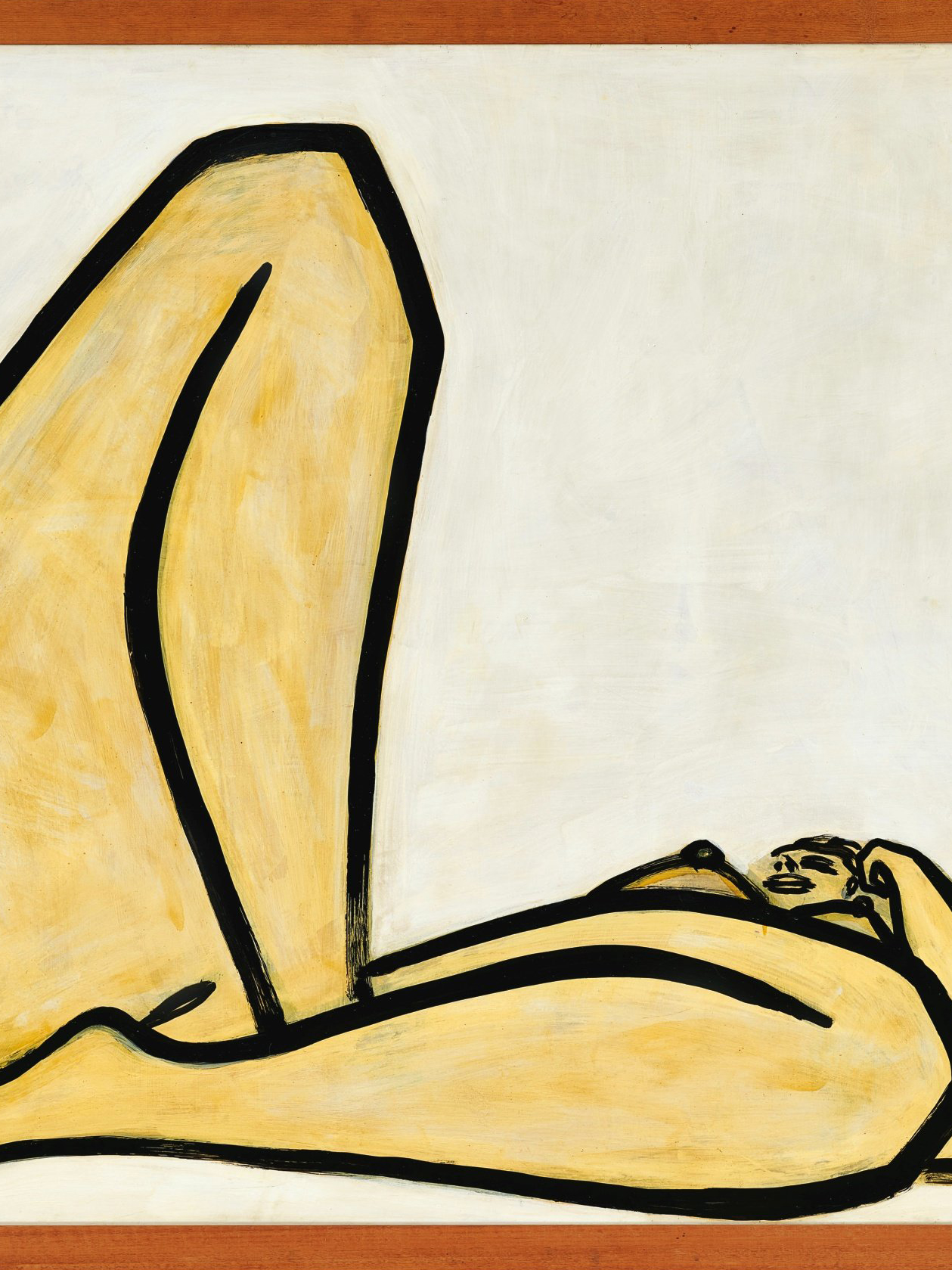 In 2020, San Yu's lots volume and prices in Hong Kong will continue to rise, and the turnover has jumped to the top of the list. His 4 works were sold in Hong Kong for HKD $100 million, all of which are listed in his Top 6 list. 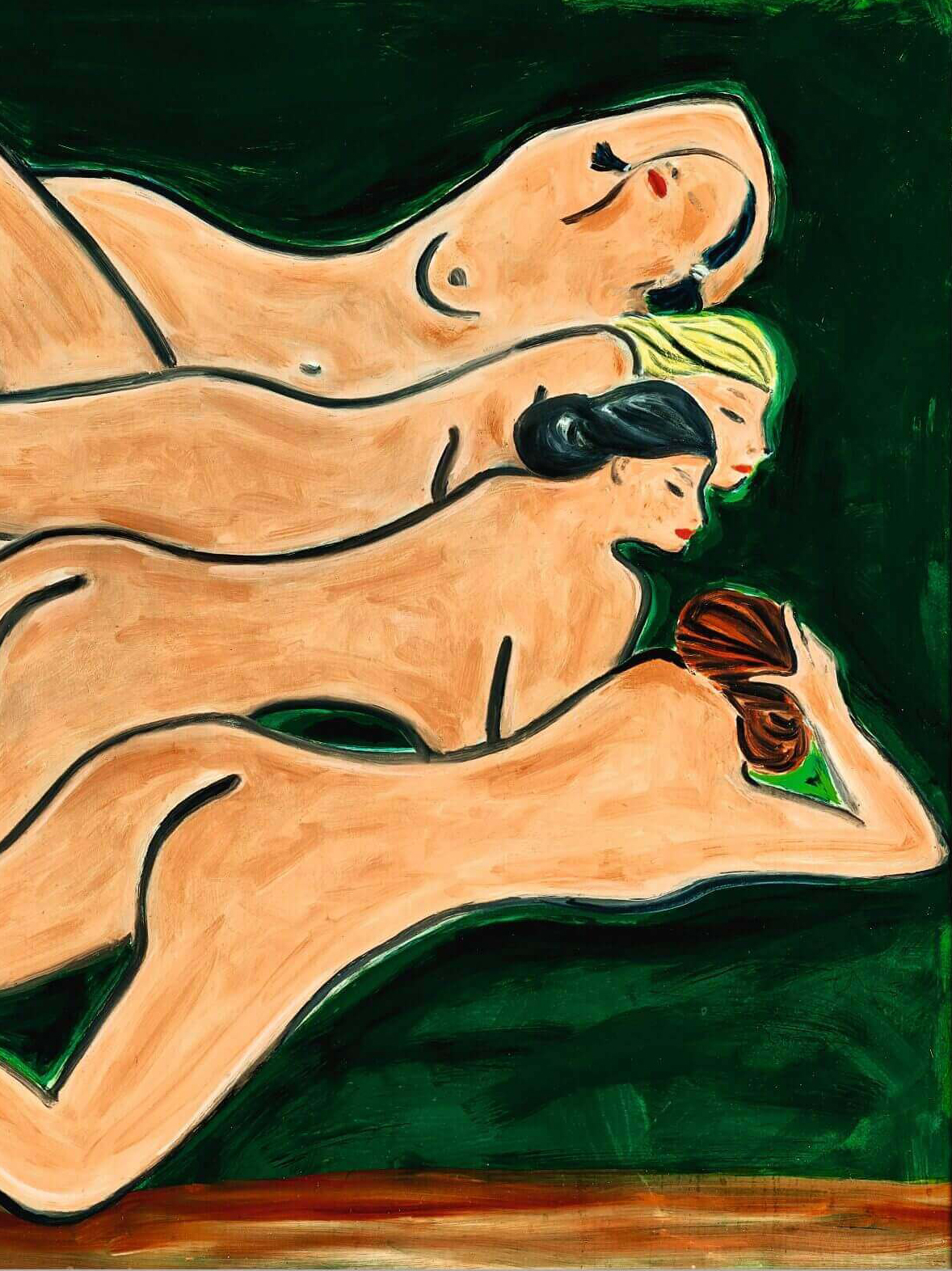 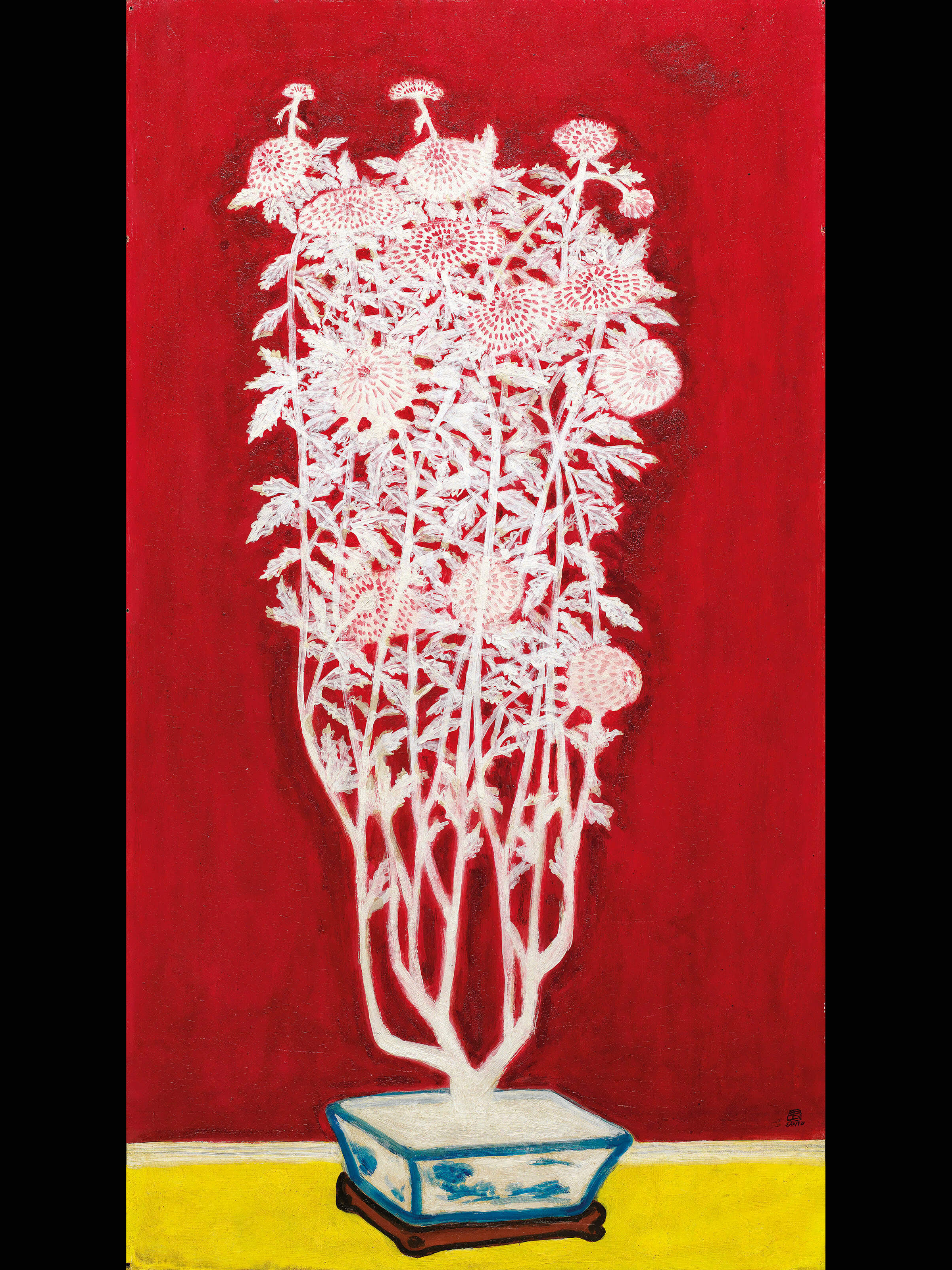 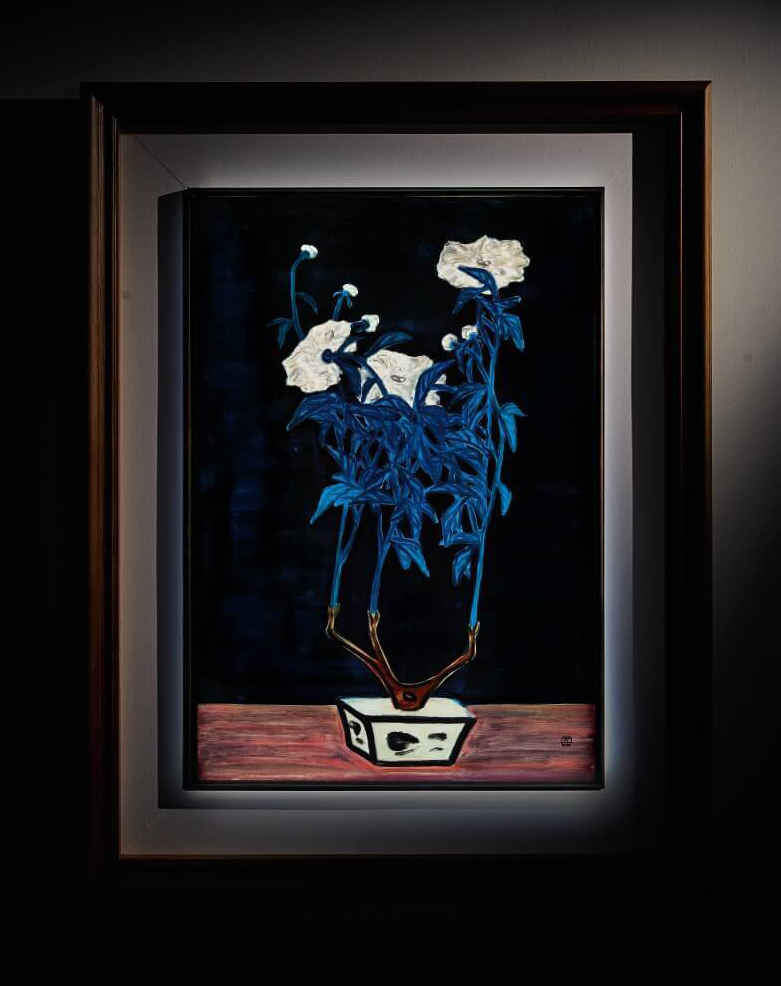 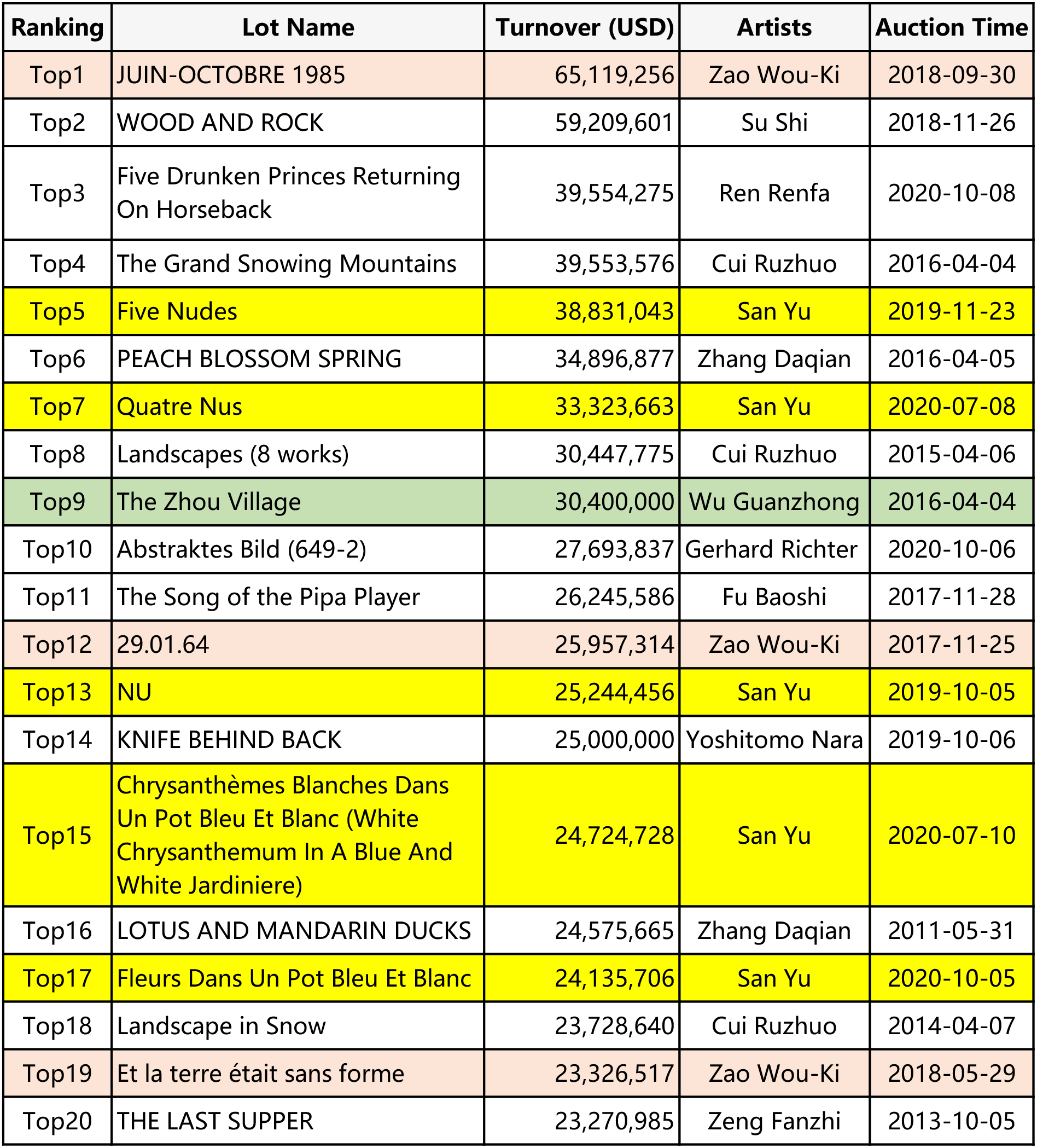 3.Wu Guanzhong: The auction field has changed from Hong Kong to Beijing and Hong Kong again, now it has scored twice in Hong Kong 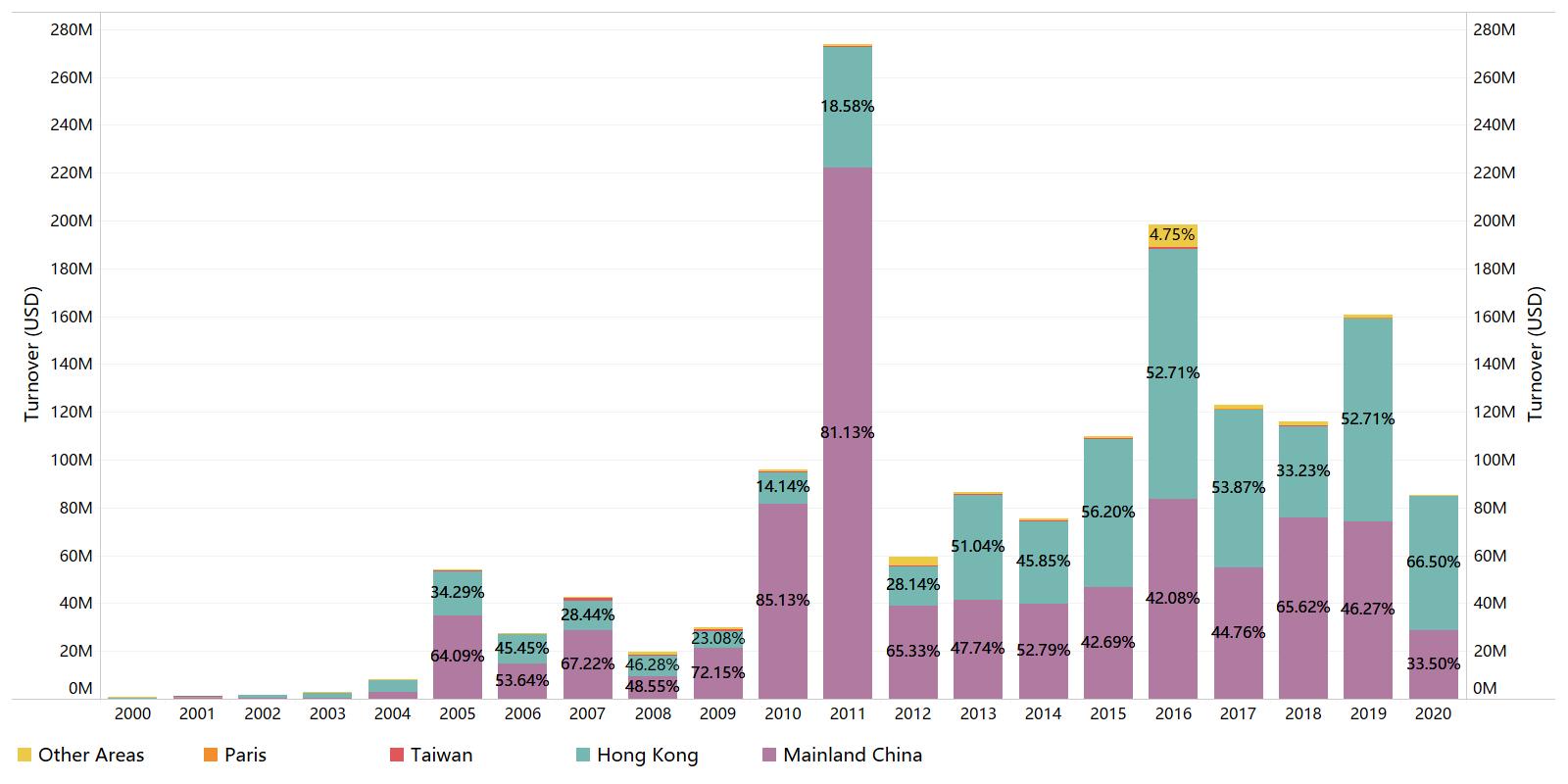 In the past 20 years, Wu Guanzhong's price index in Hong Kong has risen 41 times, with market peaks in 2011 and 2016.It is worth noting that taking 2000 as a reference, Wu Guanzhong’s price index in the Hong Kong market has always been higher than his price index in the global market, and the increase in Hong Kong in 2016 was particularly significant. The oil painting The Zhou Village was sold for HKD $236 million in Poly Hong Kong 2016, setting a new personal record for Wu Guanzhong. The work A Lotus Pond on paper was sold for HKD $106 million. 2019 coincides with the 100th anniversary of Wu Guanzhong’s birth. The Hong Kong Museum of Art, the art institution with the most and richest works of Wu Guanzhong, held a special exhibition to review his art career for more than half a century. The oil painting LOTUS FLOWERS (I) was held in Hong Kong at March with a price of more than HKD $100 million, which is 8 times higher than the estimate. 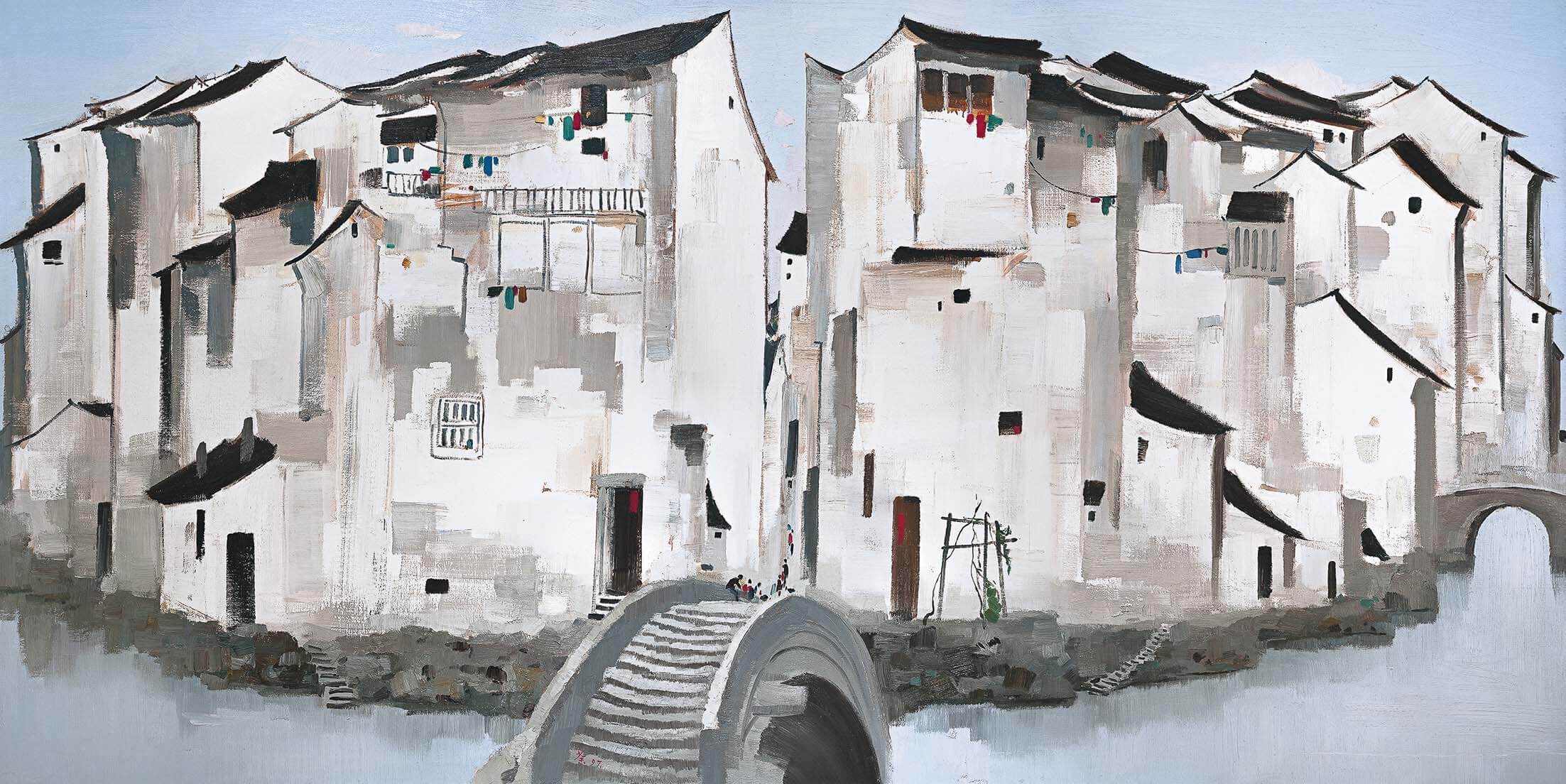 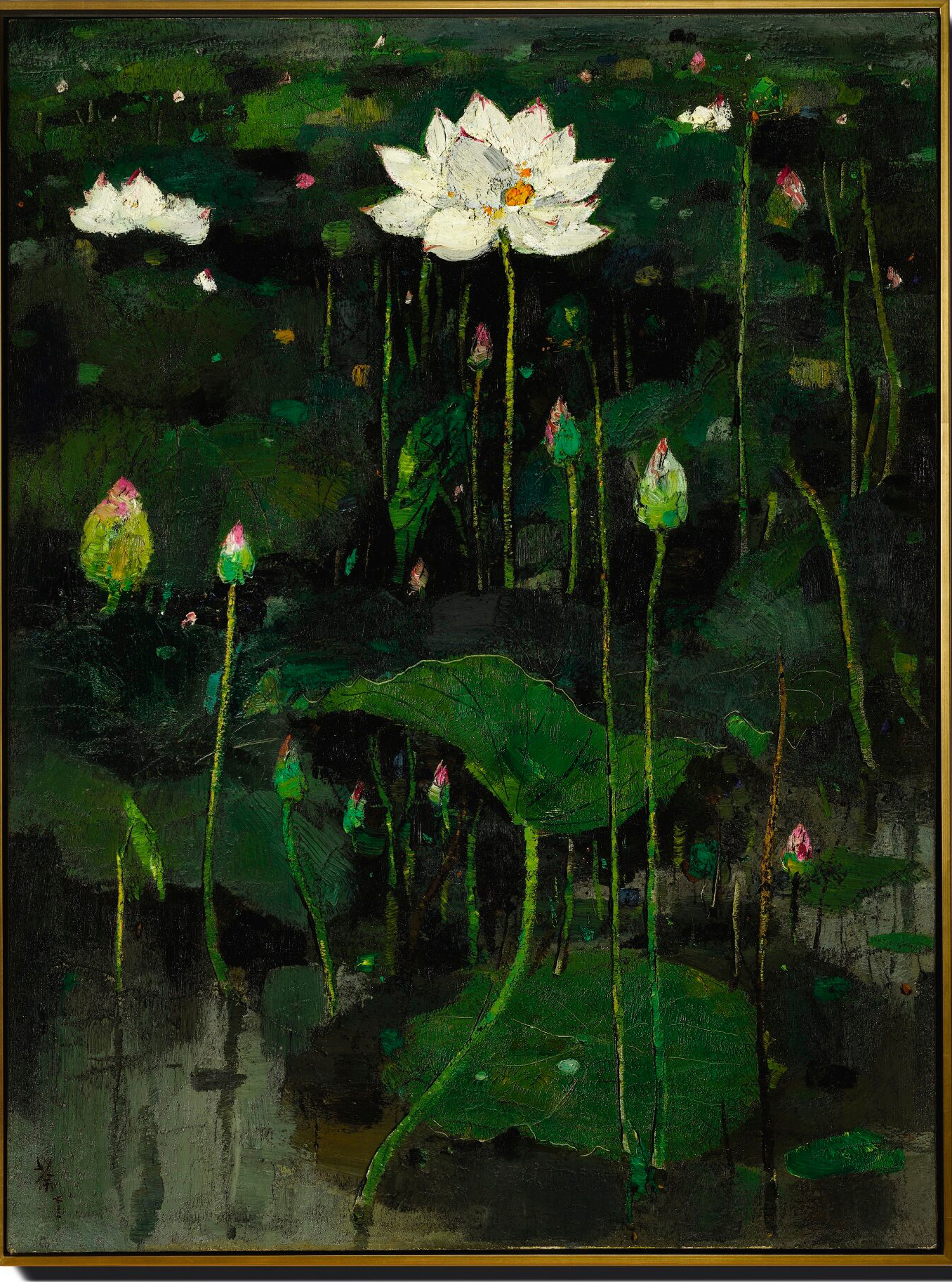 In October 2020, the "red-themed" oil painting Scenery Of Northern China has been presented at Sotheby's Hong Kong. It was sold at a high price of HKD $151 million, updating Wu Guanzhong's current personal Top3.

4.Chu Teh-Chun: In 2012, the turnover in Hong Kong has reached its peak, and the market was strongly activated in 2018 In the past 20 years, Chu Teh-Chun’s auction markets have been concentrated in Mainland China, Taiwan, Hong Kong and Paris. This is due to his relatively stable group of collectors in these tree cities. In 2012, Chu Teh-Chun's market reached a peak, and the turnover in Hong Kong has reached the highest point ever. The market experienced a trough in 2017 and rebounded strongly in 2018. In 2020, the Hong Kong market has contributed 83.14% of the total turnover which is an outstanding result. Chu Teh-Chun's price index in Hong Kong has increased by 21 times in 20 years, basically the same as the global increase. Looking at the list of his Top 20 lots, 18 of them were sold in Hong Kong. In 2018, two works have been sold at high prices in Hong Kong, which are NO. 268 and ROUGE LOURD ET VERT LEGER. 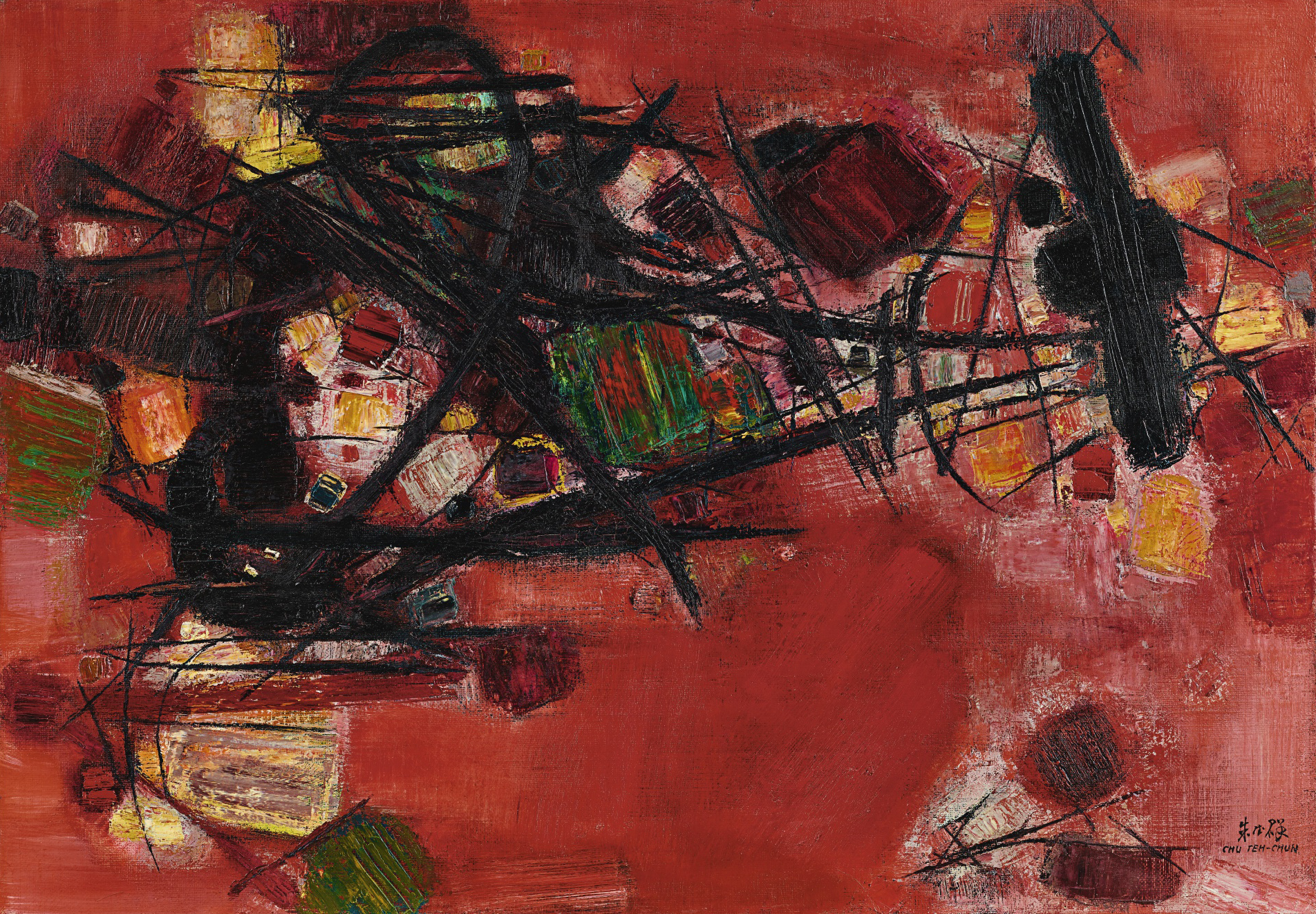 2020 is 100th anniversary of Chu Teh-Chun's birthday. The oil painting LES ÉLÉMENTS CONFÉDÉRÉS was sold in Hong Kong on July 8 for 113 million Hong Kong dollars, breaking the auction record that was set by SNOWY VERTIGO in 2016, and became the top one his sales over HKD $100 million.

The works of French-Chinese artists integrated Eastern and Western aesthetics, and have been respected by collectors after years of cultivation in the market. With the precipitation of time and the emergence of scenic spots, the growing space of their works is still the focus of the future market. After the October auction season, the Hong Kong autumn auction will soon to start again in December. Let us wait and see what market performance of these French-Chinese artists. 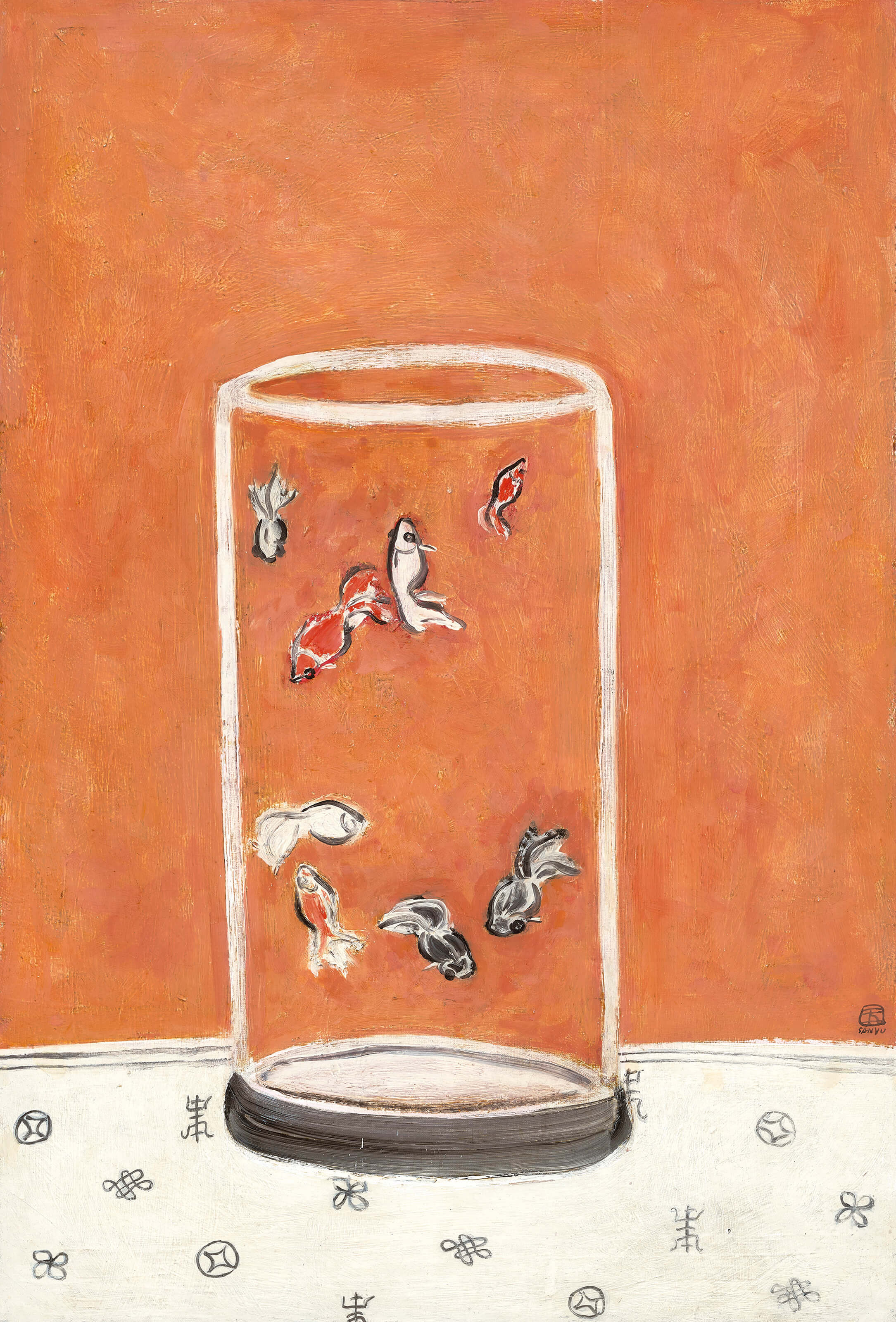 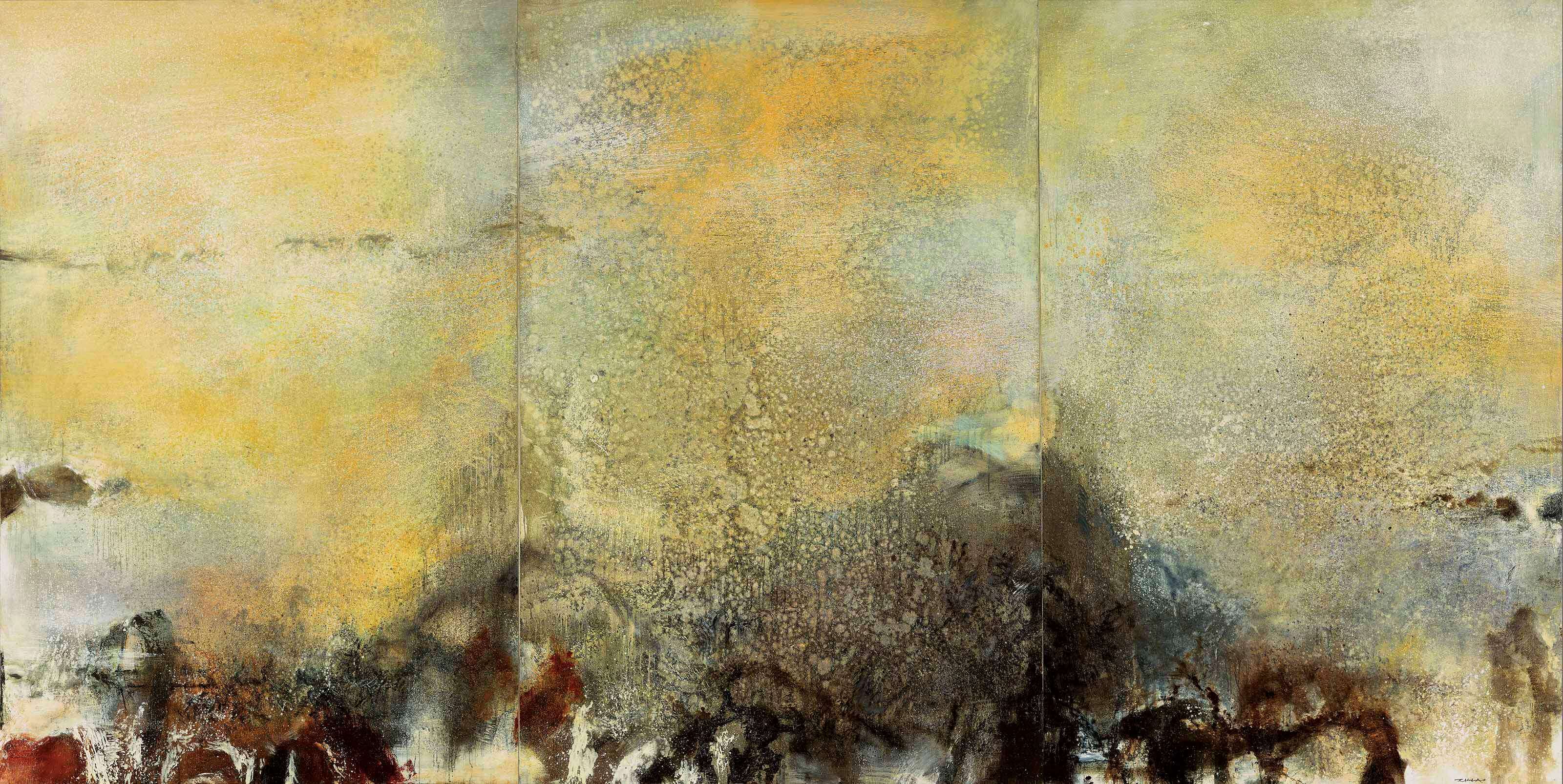 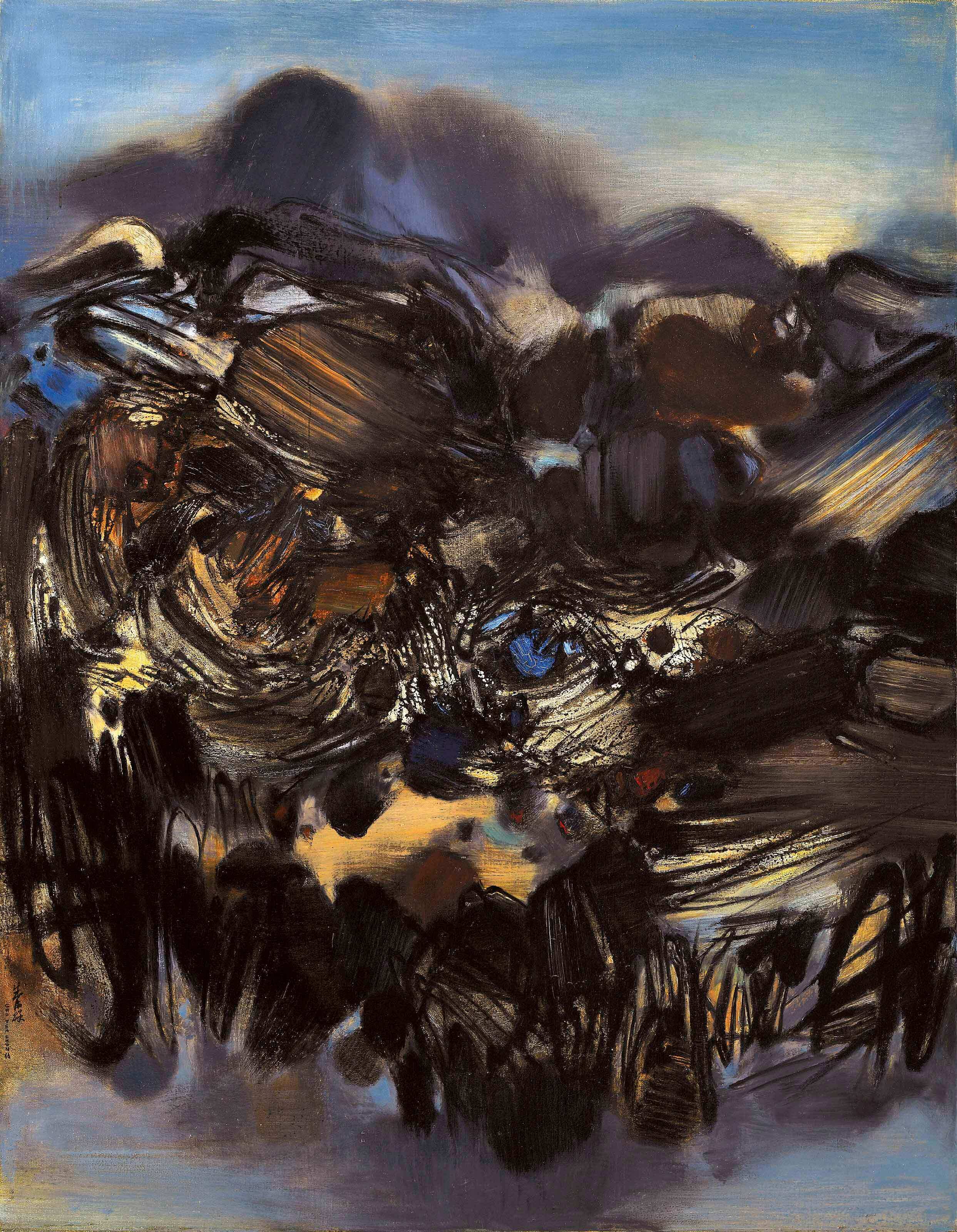 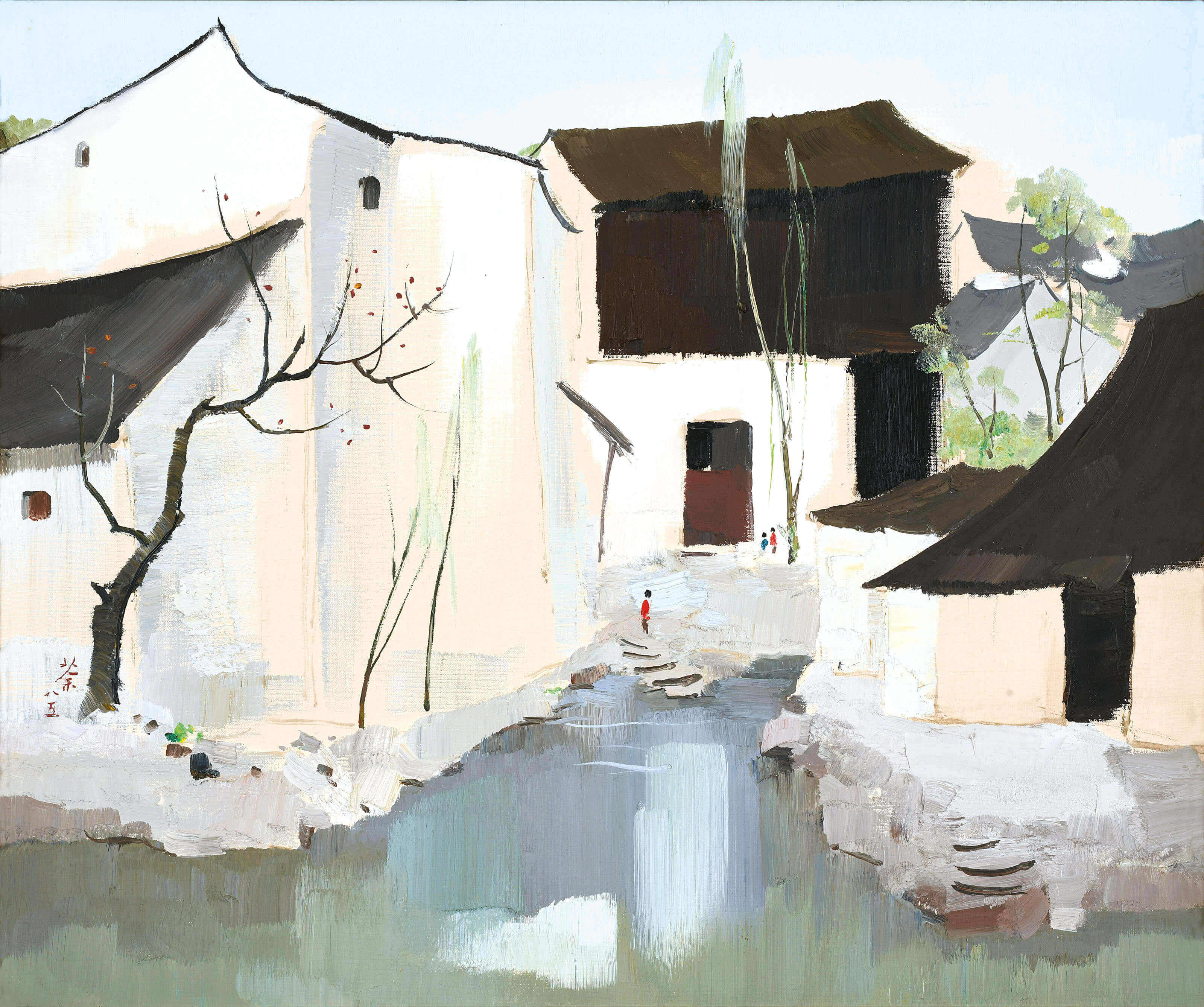