Paul Cézanne is known as the "Father of Modern Art", his painting style has always been highly regarded. He was the student of Camille Pissarro, both Pablo Picasso and Henri Matisse has been learning from him. Cézanne's performance on auction market were stable in recent two years. In 2020 October 6, his work Nature morte avec pot au lait, melon et sucrier were sold for USD $28.65 million that broke his most expensive watercolor painting record in world-wide. Now, let's come closer to this master painter and explore his career path. 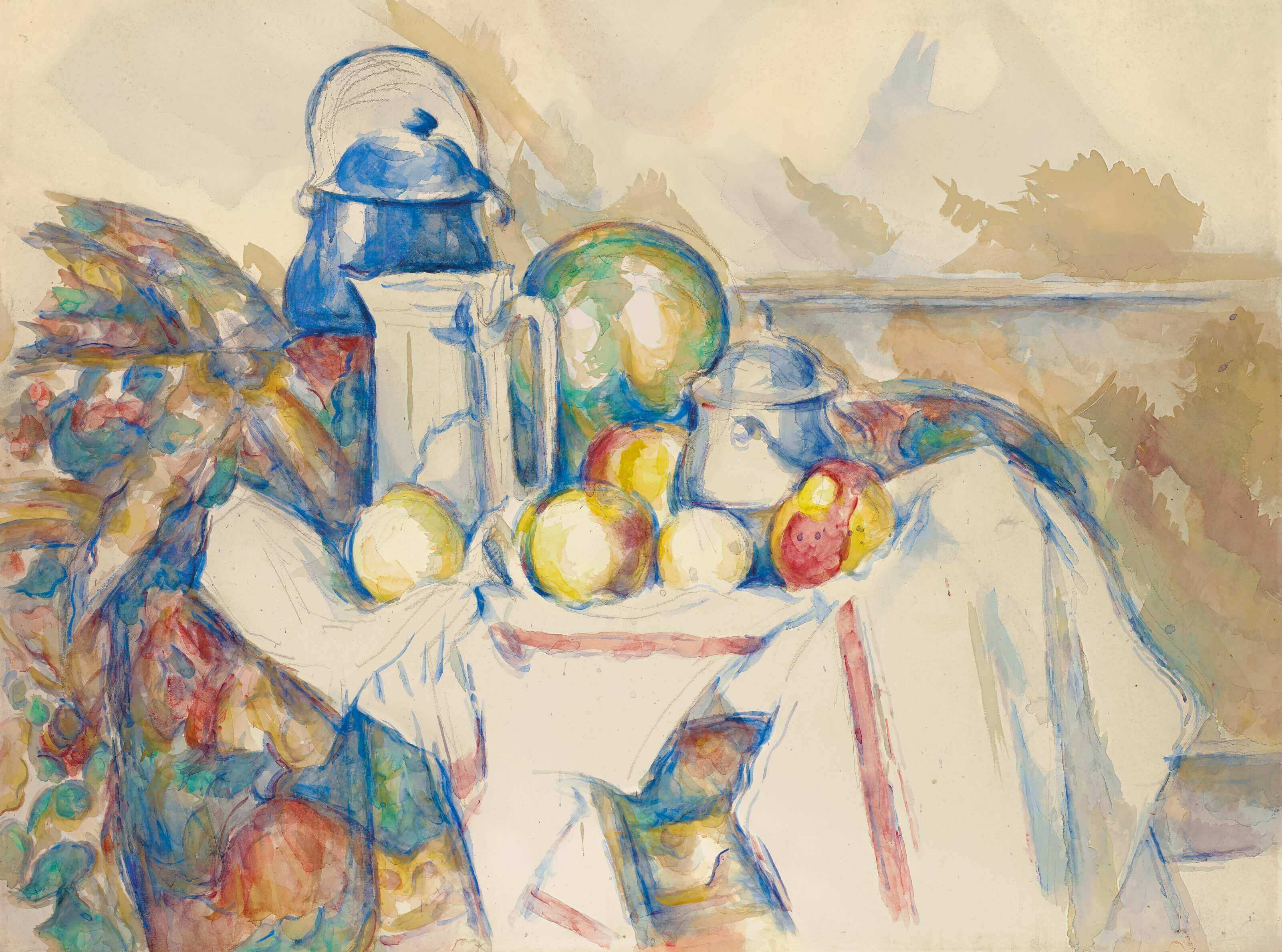 Cézanne was born in Aix France in 1839, a son of a wealthy banker. This high-born background allowed him to concentrate on painting without worrying about living. As an artist, Cézanne has always been a lonely explorer who was trying to provoke the traditions. His style is settled between Impressionism and Cubism. His way of painting is to depict subjects "by using cylinders, spheres and cones". This innovative way of expression had strong influence on modern art history.

In the past 15 years, Cézanne's price index has fluctuated slightly but stayed at a high level. Due to the low volume of lots in auctions and less high quality works on market, his annual turnover is not stable and has experienced three fluctuation. In 2019, the annual turnover exceeded USD $100 million, the price index also reached the highest point in the same year, and therefore his performance should not be underestimated. By 2020 so far, a total 19 lots have been auctioned and 17 pieces were sold which have contributed USD $32.7 million. 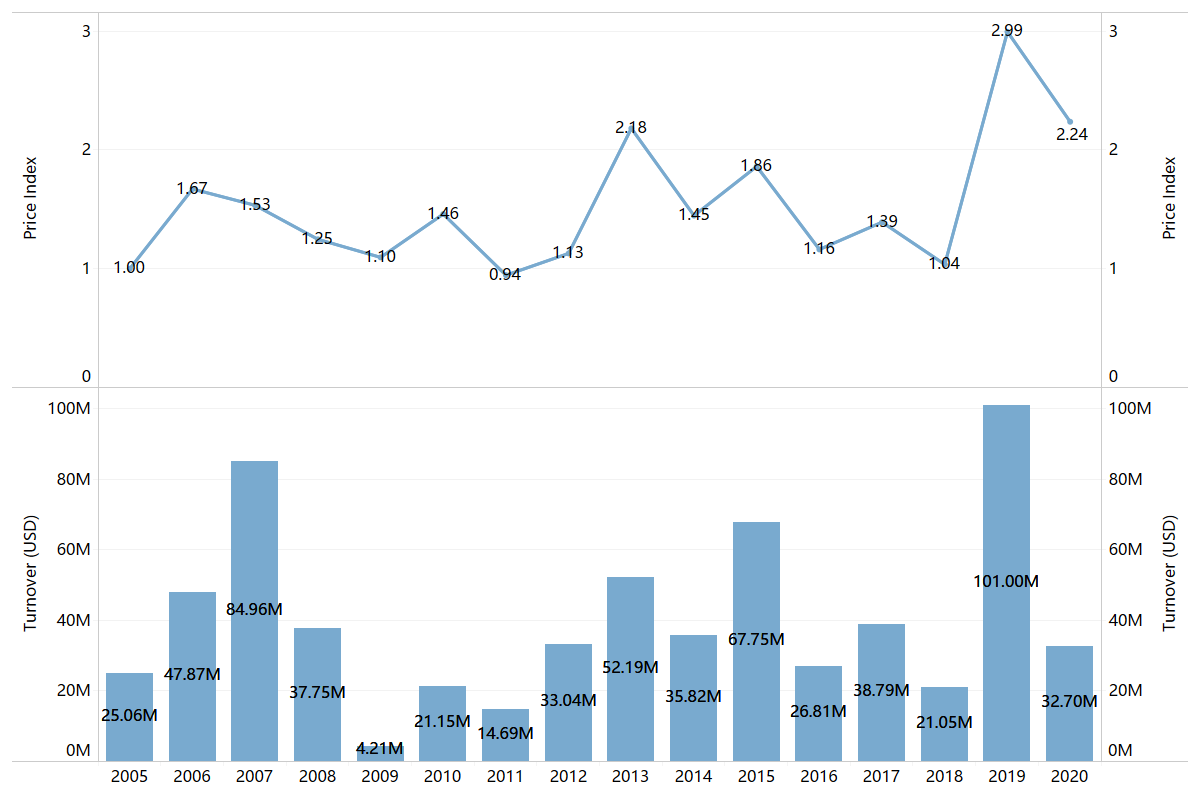 Cézanne's single works has contributed a lot to his annual turnover in 2019. Bouilloire et fruits and Nature morte de pêches et poires were sold for USD $59.29 million and USD $28.28 million that settled as Cezanne's Top 2 and Top 8. 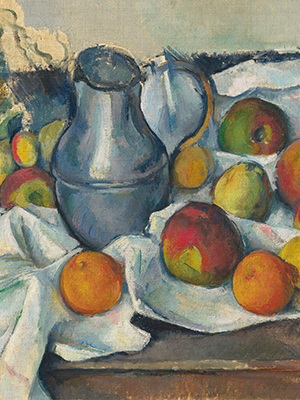 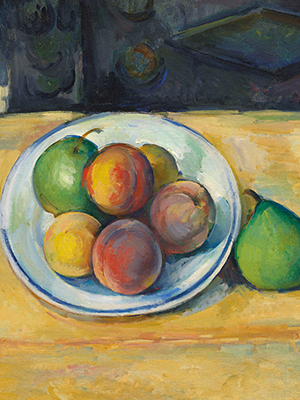 2.The impressionist works has largest amount, works in the 1980s and 1990s has great contribution

Cézanne's works can be divided into four different periods: Early Stage, Impressionist Period, Classical Period and Later Period. Each stage marks the exploration and improvement of the artist. The impressionist period has the largest amount of works, followed by Classical Period and Later Period. These two periods together has half of the proportion, but the turnover accounts for nearly three-quarters of total. It is clear that Cézanne's works after 1880s have greater value on market. In Cézanne’s Top 10 list, all works were created after 1883 which belong to Classical Period and Later Period. These two have 7 and 3 pieces on the list respectively. The first period is the style developing stage of Cézanne, and the Later Period is the mature stage of his art creation that market value is self-evident. 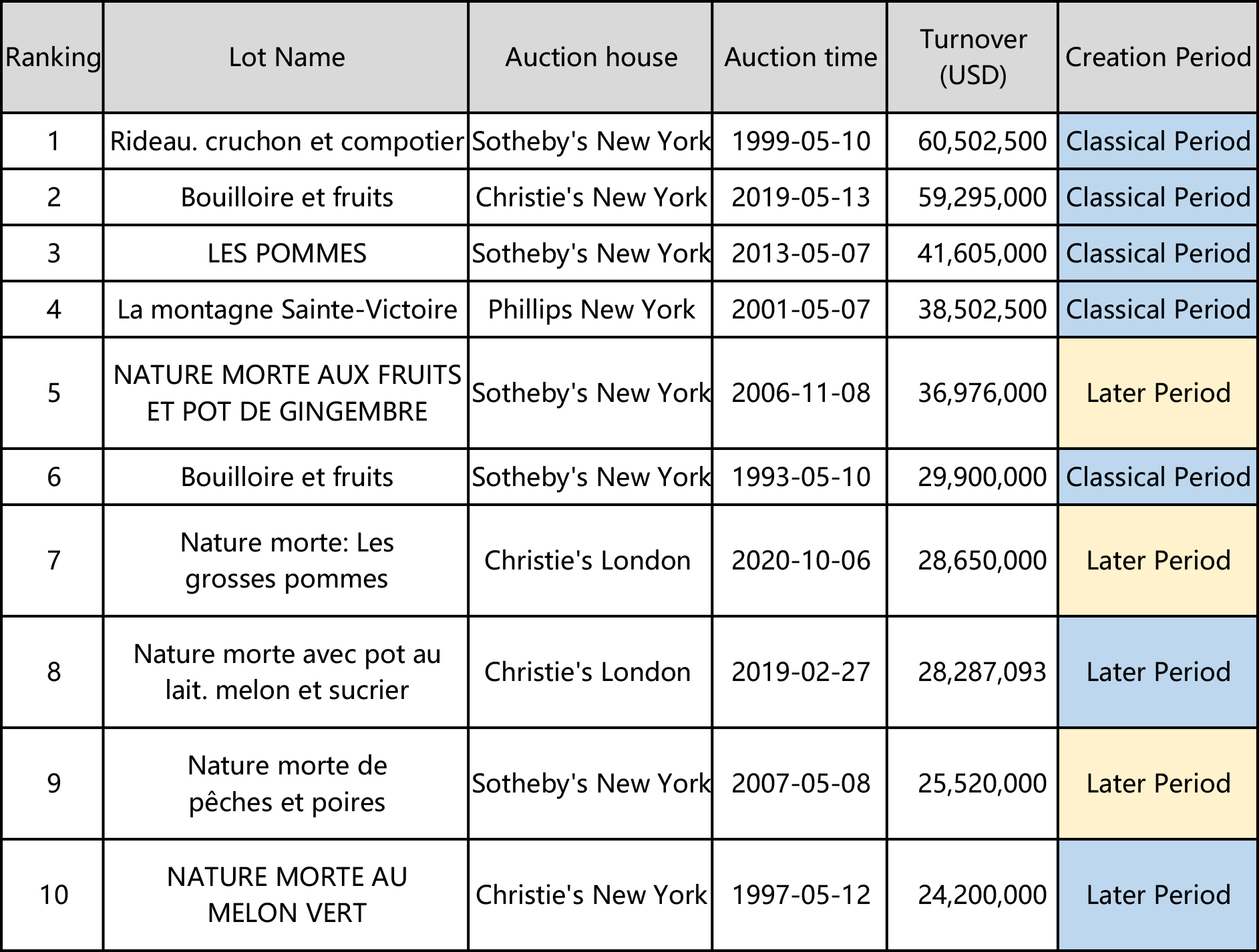 In the early years, Cézanne often likes include many large-scaled and imaginative landscape paintings. He uses rough brushwork, depicting the subjects drastically with romantic and classicism feature. Cézanne would even use a spatula to directly to applied paints on canvas, so there were many raised folds and cracks on the surface of his early oils. He was obsessed with gray in early years and often paint with dark colors. 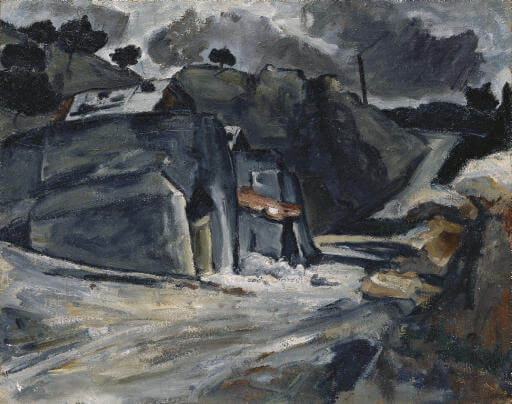 In his landscape paintings, both the closed and distant objects are drawn into the same plane. The trees and houses are depicted with cursory brushstrokes and lines, even grass and dark clouds. The whole image seems to filled with suppressed fantasies. 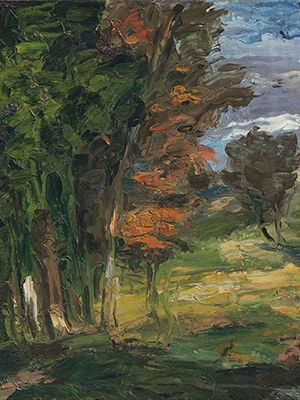 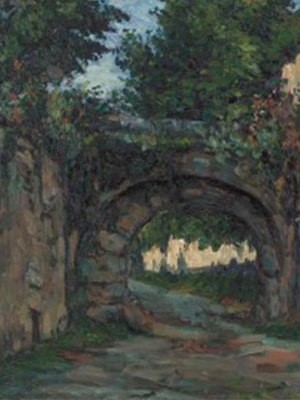 In the 1970s, Cézanne had contacted with impressionism in Pontoise, the visual style of his painting became more objective with brighter tones. Camille Pissarro had great influence on him by bring Cézanne to sketch in the forest, so he no longer insist on using gray and dark colors. His paintings are getting brighter and the style has been changed. Instead of cursory brushstrokes he started to use small dots that are evenly placed. He also began to apply color blocks so the imagery appeared in harmony and peace.

Cézanne once said that the person he respected most was Camille Pissarro, and Camille Pissarro's teachings has become the foundation of his artistic development in whole life. But after 1878, Cézanne has left Impressionism in search of a more specific posture and composition.

After Cézanne left Impressionism, he started to regain the depth in nature. He found that the rigorous architectural structure in the paintings of Nicolas Poussin was exactly what the Impressionists were looking for, so he started his own exploration in these laws of classics. Because of Cézanne’s orderly combination of lines and shapes during this period, as well as the structural forms of geometric shapes that extend to the center of perspective, that made him "Father of Modern Art", and had great influences on Henri Matisse, Pablo Picasso, Paul Gauguin and other artists. 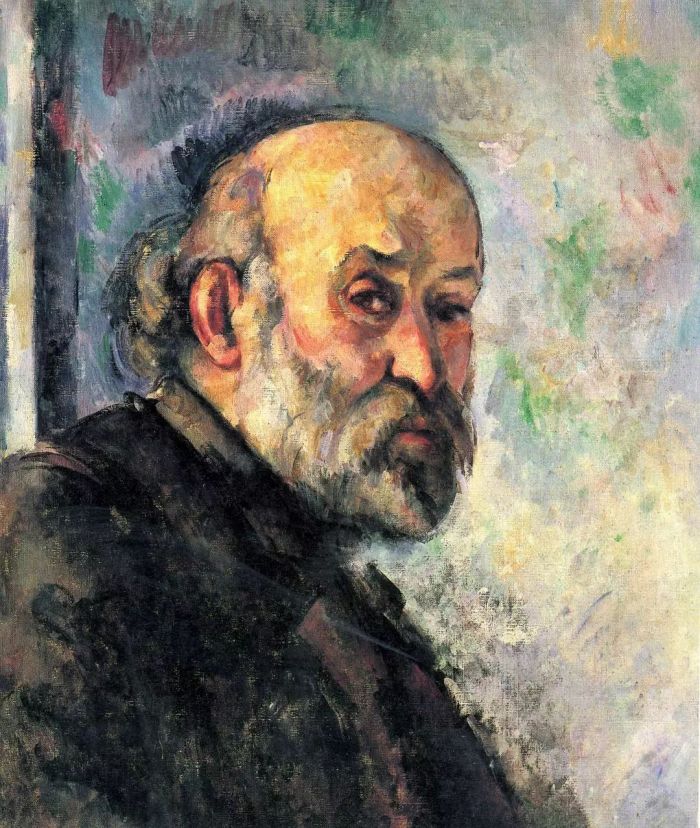 The landscape paintings in this period have come to maturity with lyricism, achieving excellent classical paintings, and his portraits also have unprecedented classic features. Looking out from Provence to the Mont Saint Vidoc, this mountain is one of Cézanne's most common subjects. He is keen to show the most authentic and diverse art from a natural perspective. The differences between Cézanne and his predecessors is his revolutionary creation. He doesn't care about "what to paint", but "how to paint". This painting of a bathing women reflecting Cézanne's emphasis on the purity of painting, the forms and composition. The relationship between trees and the background, the trees and the figures, and between each characters has been carefully laid out. Pablo Picasso's Les Demoiselles d'Avignon has a Cubist style and handling of lines. It has the features of Impressionism with a three-dimensional effect.

Cézanne also had an important influence on Henri Matisse who appreciated his using of colors and ability to combine patterns with background. Henri Matisse once said: "If Cézanne was right, then I am correct".

The beauty and splendor of Cézanne's still life paintings are well known. He often puts different subjects together in order to obtain the perfect harmony of shapes with different colors. He is not only expressing a certain part of the real nature, he is exploring the transformation of objects in multiple levels and viewpoints to unify them in the picture, so that the image has a broader and more comprehensive connotation.

Fruit Paintings of Gauguin and Cézanne

In his later years, Cézanne continued to create and explore. In addition to the thorough knowledge, perfect skill, and rich colors, the works made people feel a kind of high spiritual power. From 1900 to 1906, the series of watercolor paintings he created before his death which concentrated skills that he learned in hiswhole life, and is also the last pinnacle of his art creation. Nature morte avec pot au lait, melon et sucrier is the ultimate work of Cézanne's watercolor painting, and it also established the concept of "Modern Art". 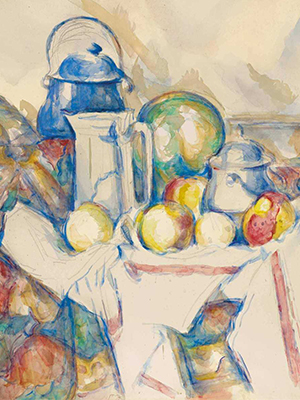 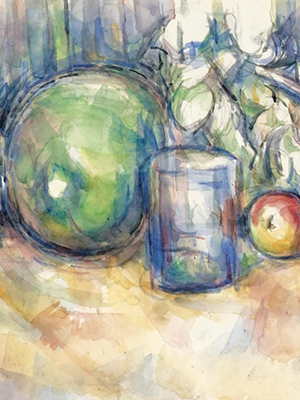 Every artist is interpreting art and the world in his/her own way. Cézanne abandoned traditional concepts and rules by only relying on his own observation to create. He has been striving to describe what he sees in most appropriate way. The way he observes the world gives the viewers a new perspective, his style has profound influence on the next generations and development of Western modern art. ArtPro will continue to pay attention on Cézanne's performance in the global art market and bring you more information.