Claude Monet was a French painter, a founder of French Impressionist painting. The term "Impressionism" is derived from the title of his painting Impression, soleil levant , and he also started the movement's philosophy of expressing and practicing. He is an expert in experimenting the expressive ways of lights and shadows, whose most important contribution is to transfer the practicality of paintings into aesthetics. Impressionist revised the shadow and outlines from traditional paintings by capturing the changing of lights and switching of colors. Especially in Claude Monet's later practice, the images are featured by loosen brushstrokes and colorful swirl, this method even had affections on abstract expressionism in later 20th century.

Meules from Claude Monet's later career was sold with 110.7 million dollar in New York at 2019 which broke new record of the impressionist works on market. Meules series was consisted by 25 paintings, that Claude Monet spent long time on capturing the changing of lights under different weathers. This work particular, with extremely rich colors and distorted contour that almost looked abstract due to his unduly rendering of shades and colors. The golden haystack is shining under the sunlight, makes the whole image look vigorous and full of vitality. 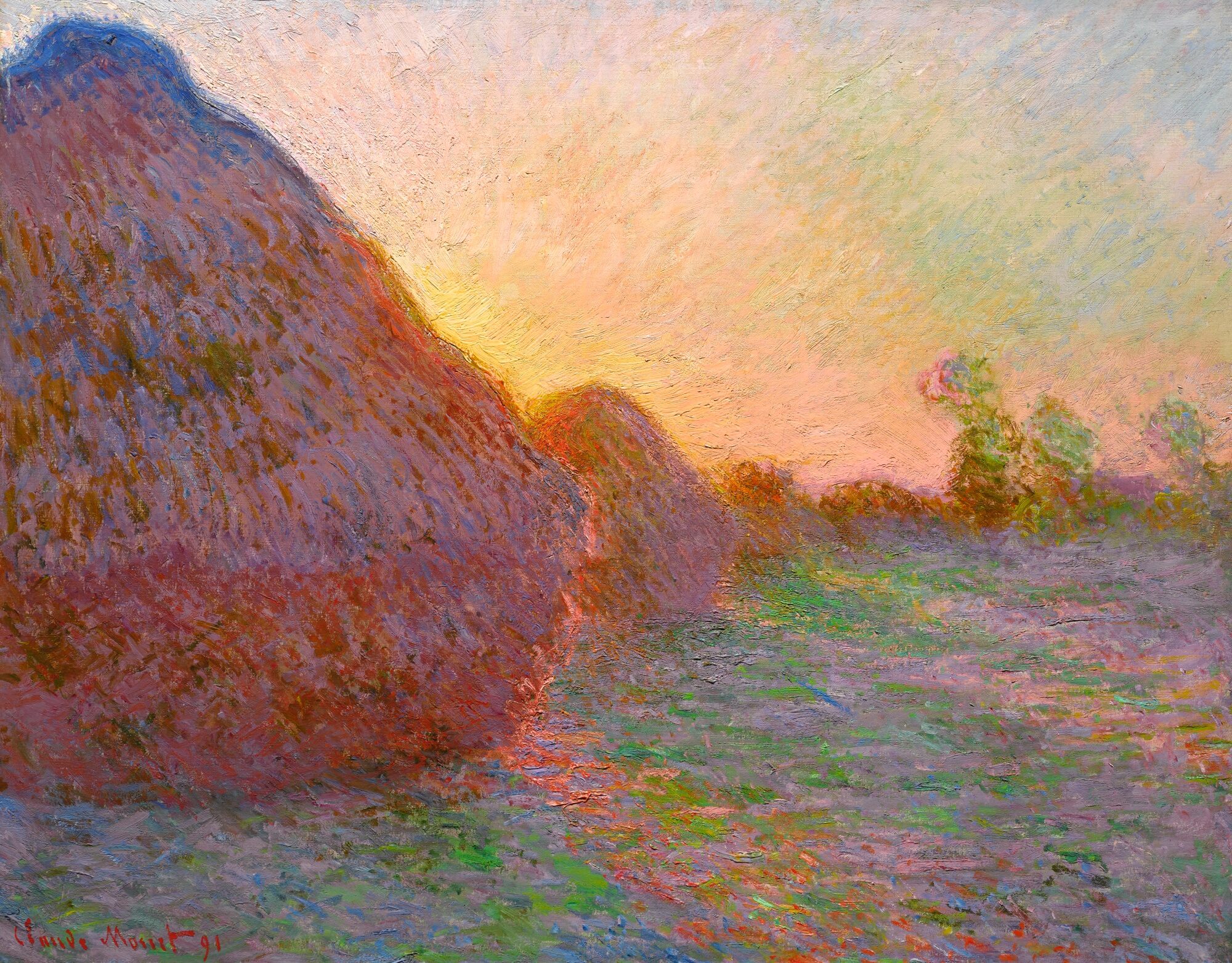 Claude Monet spent his whole life observing and documenting light and shadow, but he also had different aspiration in different periods of time. We divided his whole career into four stages by his art styles and life experiences that include: Studying in Paris Period (1856-1869), Struggling Period (1870-1882), Giverny Period (1883-1910) and Cataract Period (1911-1926). The article is going to analyze the market value and art styles of this four periods, to give you a more comprehensive understanding of Claude Monet. Proportion of turnover in different periods vs. total turnover, and proportions of 10 million dollar works from those periods 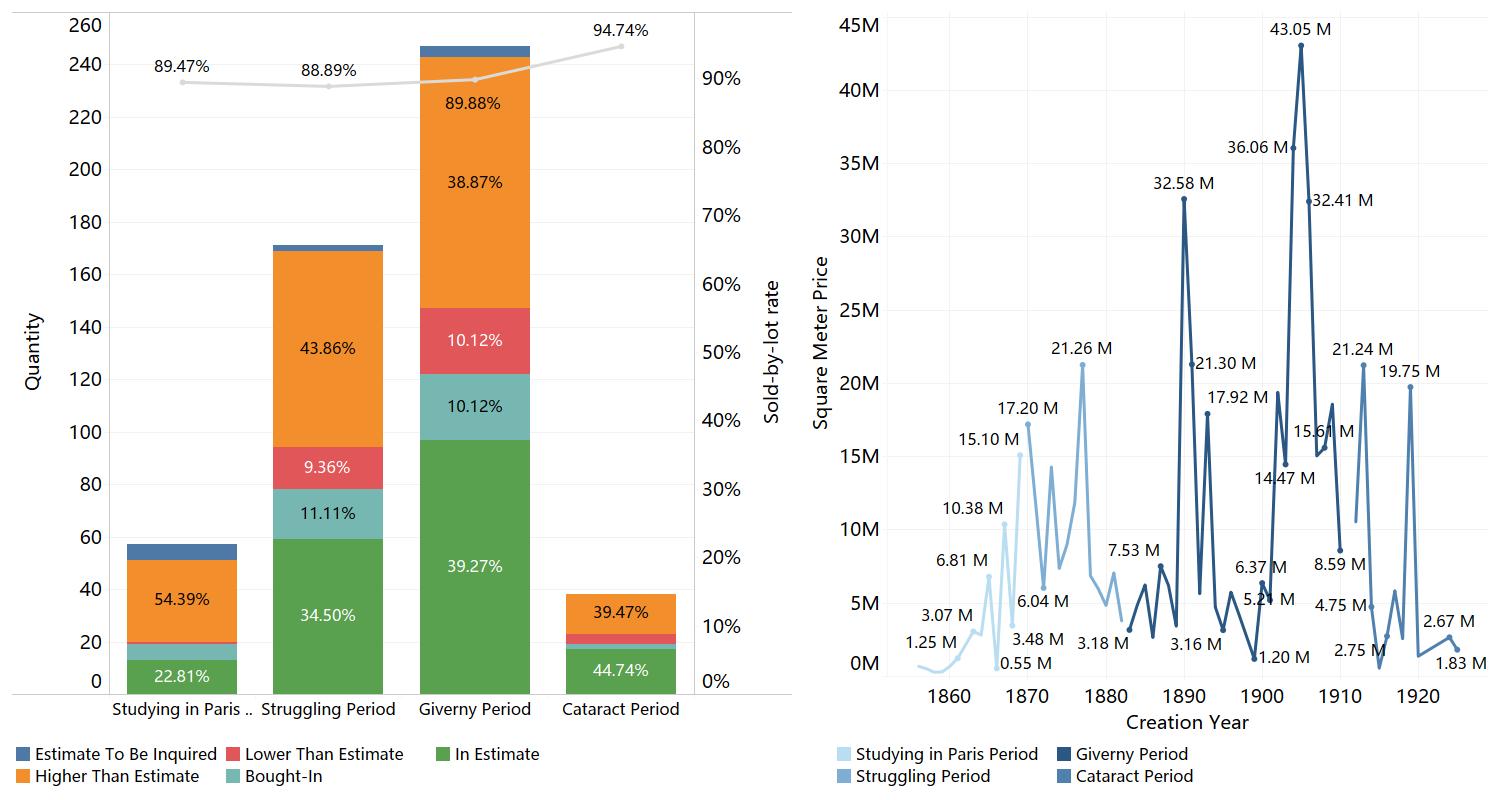 From artist's Top10 list, there are 7 pieces are created in Giverny Period, 2 works are from Cataract Period and the last one is from Struggling Period. The most pricy work Meules is in Giverny Period.

Price Index of “Studying in Paris Period” Had Biggest Rise, Deals made in New York among All Works Have Highest Turnover

Claude Monet's works from "Studying in Paris Period" had biggest rise of all his 4 stages, the price index increased by 10 times in 20 years, it jumped up greatly in 2018 and stayed in high position through 2019 and the first half of 2020. Camille assise sur la plage à Trouville sold at a premium also helped this price index surging of "Studying in Paris Period" in 2018 at some level. 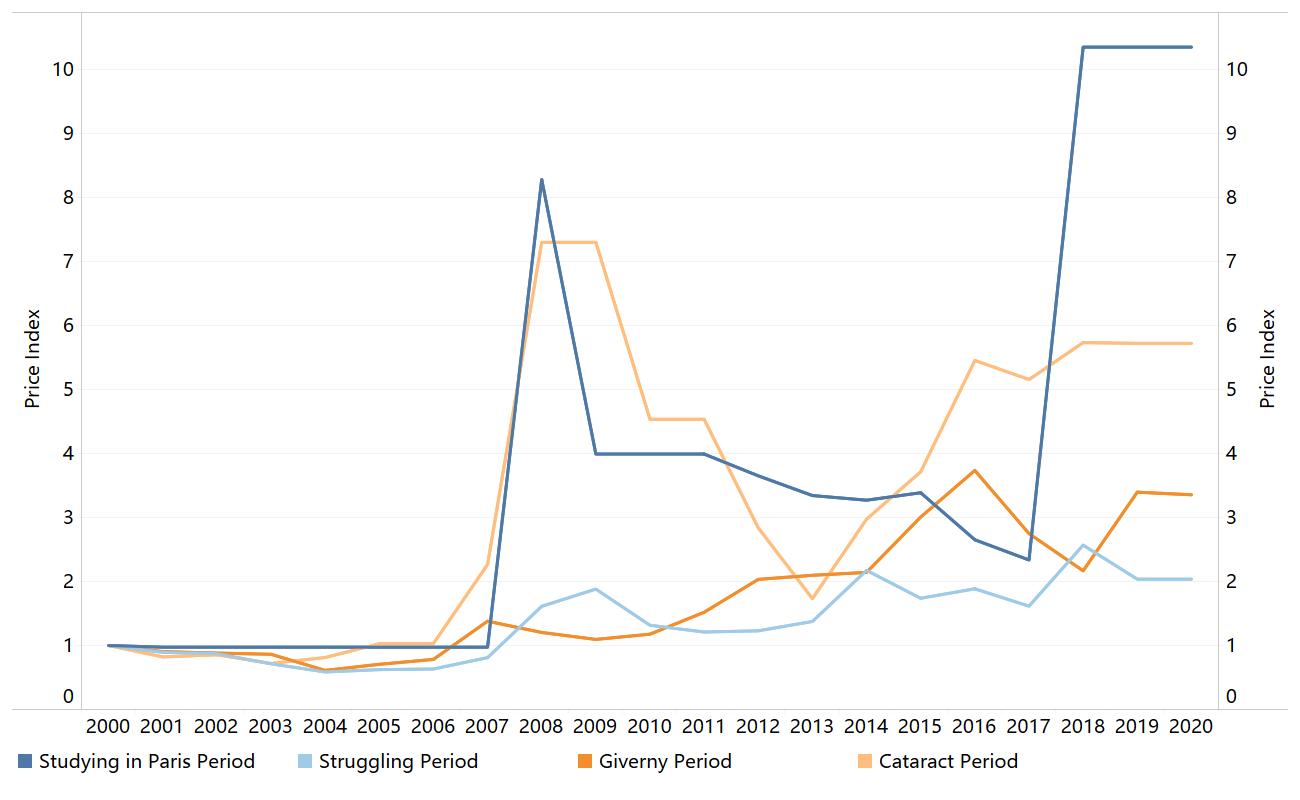 From the location distribution, Claude Monet's works from all periods had best-selling record in New York, then it's London. Particularly in the Cataract Period, 91.81% of turnover of works from this time was sold at New York market. Received encouraging from his teacher, Claude Monet went to Paris to study paintings in a studio, but his pathway to learning had a little bit obstacle. When Claude Monet just arrived at studio, he was chosen for military service. Two years later with the help of his aunt he used typhoid as excuse to get away, and finally arrived at Charles Gleyre's studio. There he met Pierre-Auguste Renoir, Frédéric Bazille and Alfred Sisley, together, they became close friends. 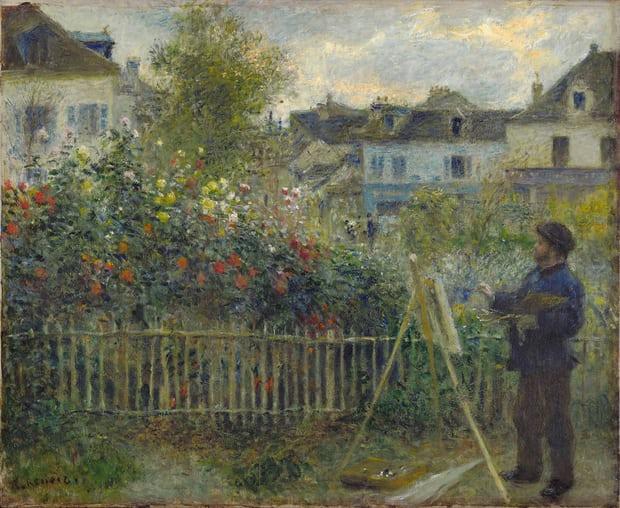 Monet Painting in His Garden at Argenteuil by Renoir

Claude Monet and his friends created this new painting method of using thick pigments for outdoors views under natural lights, later it was called "Impressionism". But during this time, the true impressionism has not born yet, and these great artists who were recognized later were still remained nameless. 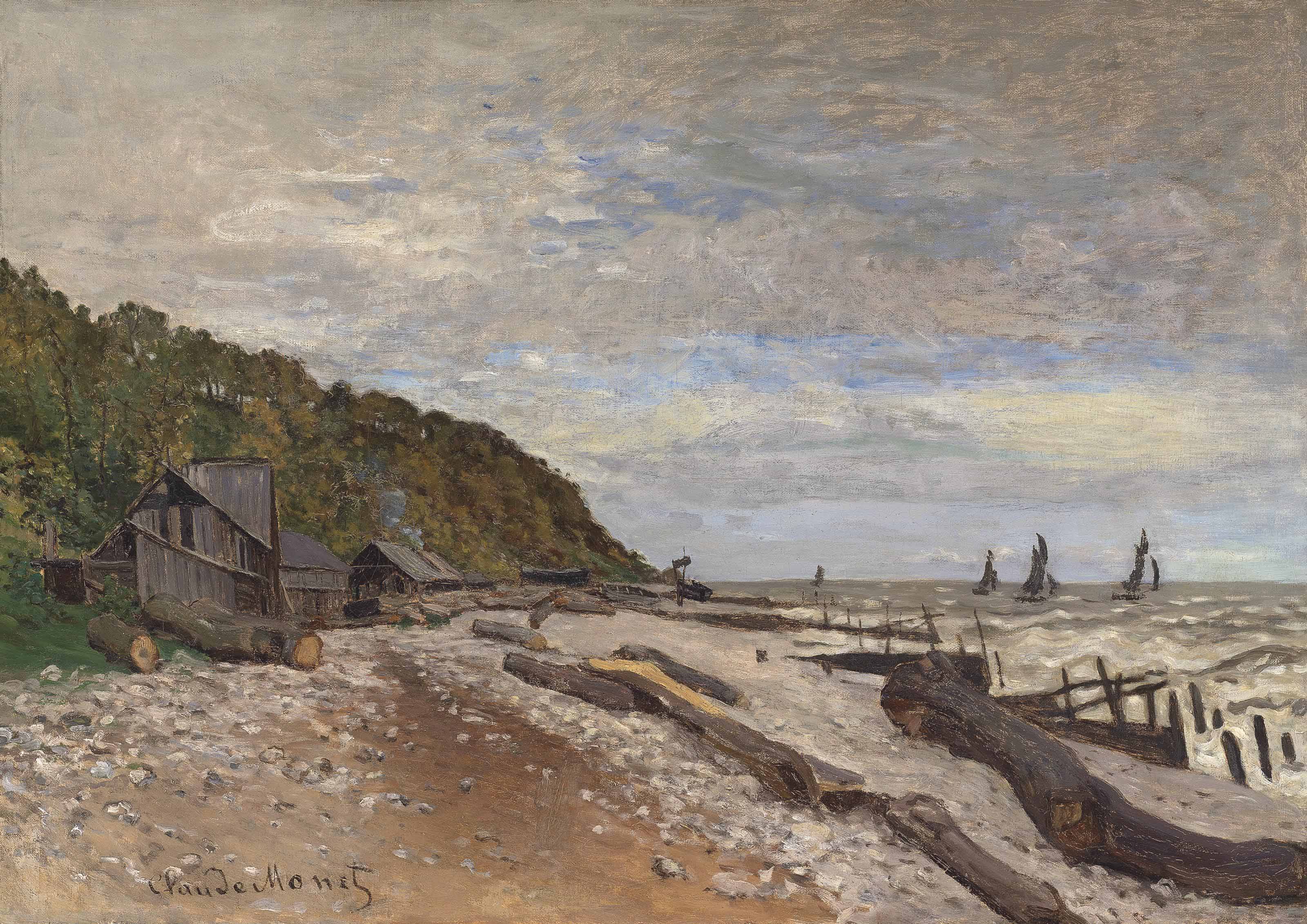 Claude Monet had received appreciation from salons, he used extraordinary skills to render the changing weather of Normandy beachside —— the cyan and blue light shines upon the ocean surface with depressing dark clouds in the sky. In 1866, Claude Monet gained another great success in salons with another landscape painting. Then, he was going to make an adventure and started to create figures. He painted Camille Doncieux, a 19 year-old model, who later became his wife. The most expensive painting in this period is a portrait of Camille, if you look close enough, you will find the shadow under the sunlight in Claude Monet's painting is actually blue. 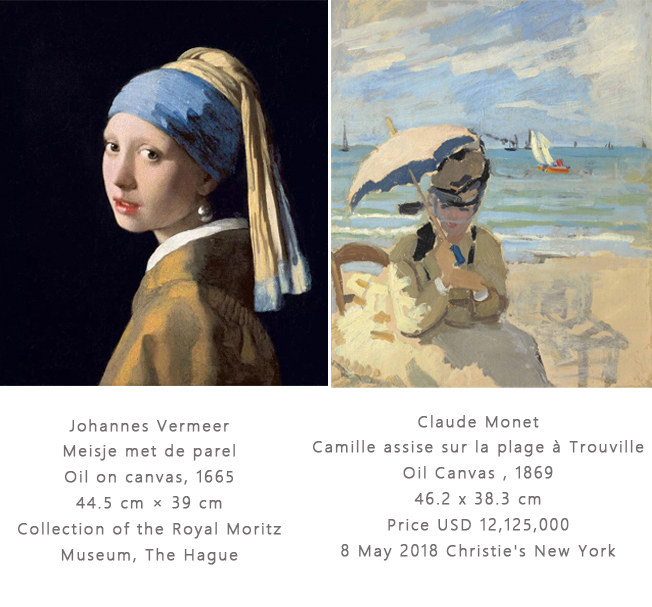 This is a provocation at the time, because the judges in salons believed paintings should describe important people from historical events rather than ordinary women, the location should be indoors not outdoors. Claude Monet and his peers broke this rule.

Challenging is always difficult, Claude Monet and his friends likeFrédéric Bazille and Alfred Sisley , Pissarro and Cézanne were rejected by many salons, and Claude Monet started his difficult time. Due to the Franco-Prussian War, Claude Monet and his wife moved to London for a year, after that they settled at Argenteuil on the right side Seine River. Argenteuil is in suburb, but it is only 12.5 kilometer away from Paris, they were connected by trains in La Gare Saint-Lazare station between the two places, which is very convenient. 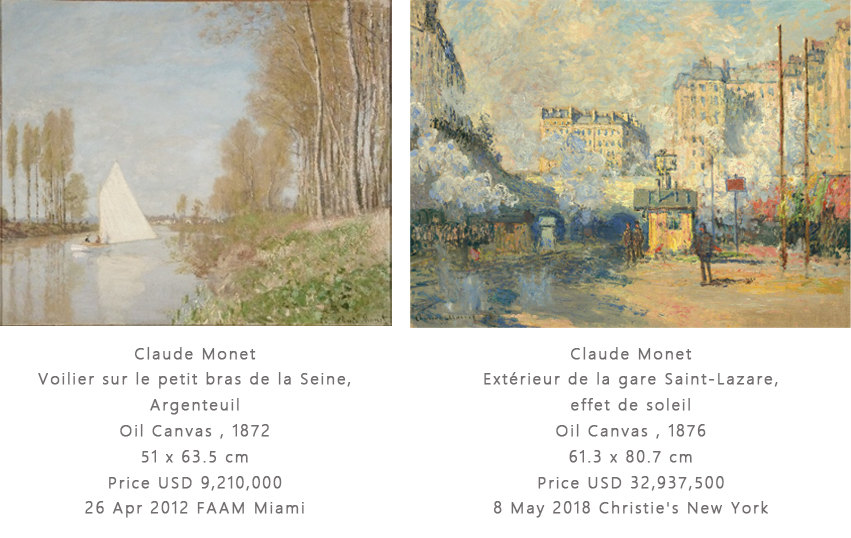 Claude Monet also bought a boat and installed a platform in the cabin to put easel as his mobile studio. He created a large amount of landscapes of the river, the most expensive one in this period is a painting that depicts the bridge at Argenteuil.。 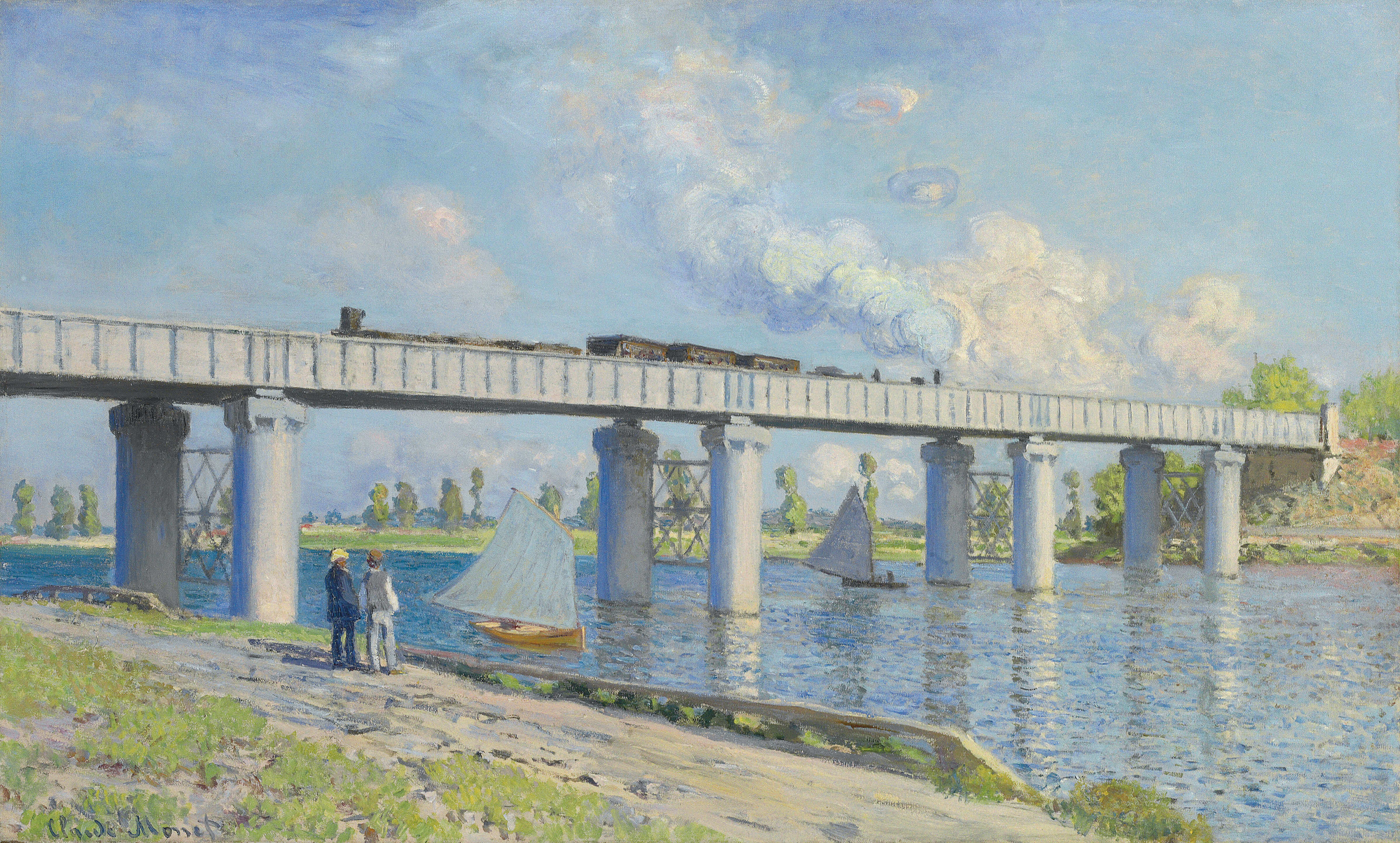 The experience during this time has provide Claude Monet a chance to explore different techniques, he tried different brushstrokes, unconventional structures and bold colors. In 1872, He created Impression, soleil levant based on the views in Le Havre while he served at military. The first time it appeared at exhibition in 1874, the painting was mocked by critic Louis Leroy, with the word "Impressionism" that against the mainstream. But the term "Impressionism" was recognized by group of artists, and since the Impressionism has begun. They stopped been a nameless bunch of people, but a group that has a title. 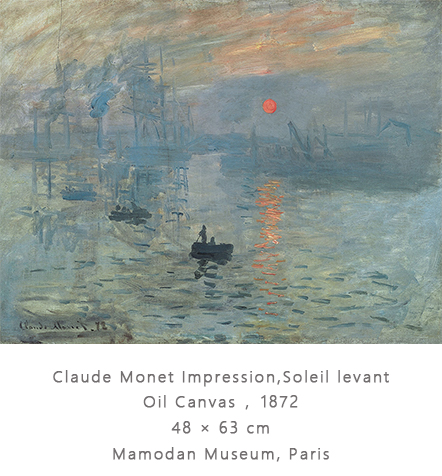 With astonish beautiful landscape paintings and developed skill, Claude Monet was still not accepted. His wife passed away after given birth to her second child, due the illness under poverty and exhaustion. Claude Monet created the last painting for his wife, and he almost never painted another figure in his whole life. 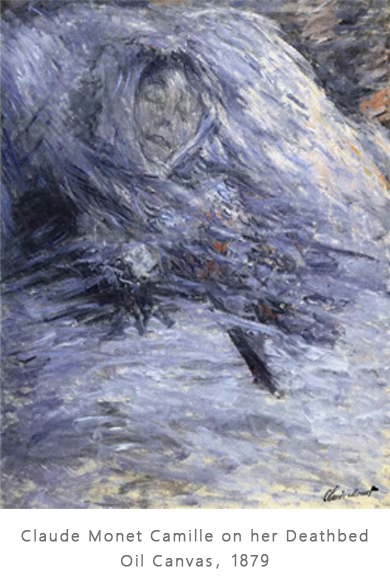 Claude Monet was shocked by the death of his wife, in the next 5 years, he did his best to increase the sales of works. In 1883, his financial condition got slightly better, he came to Giverny and settled down here as his final residence. His house is on the road that connects Vernon and Gasny, with a barn as studio and gardens, the surrounding views provided many inspirations for Claude Monet. During this time, the sales of his works has increased by art dealer Paul Durand-Ruel, and that changed Claude Monet’s fate. In November 1890, Claude Monet was able to afford the buildings surround his house. He started to create series works in this period, with same objects under different light conditions. The first one was the famous Meules series. 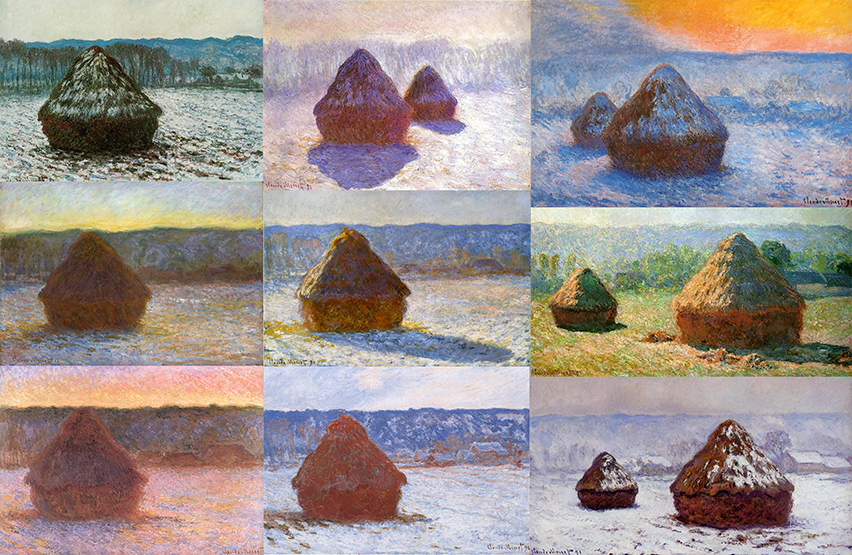 Same as the growing wealth of Claude Monet, he also grown his garden. It was inspired by Ukiyo-e in Japan, with an artistic atmosphere. The little pond in the garden was decorated as a water garden, with a large amount of water lilies. There is a Japanese styled bridge at center of pond that was inspired by Taiko Bridge from the painting of Ukiyo-e master Utagawa Hiroshige.

Comparison of Claude Monet's Garden and Japanese bridge from Ukiyo-e 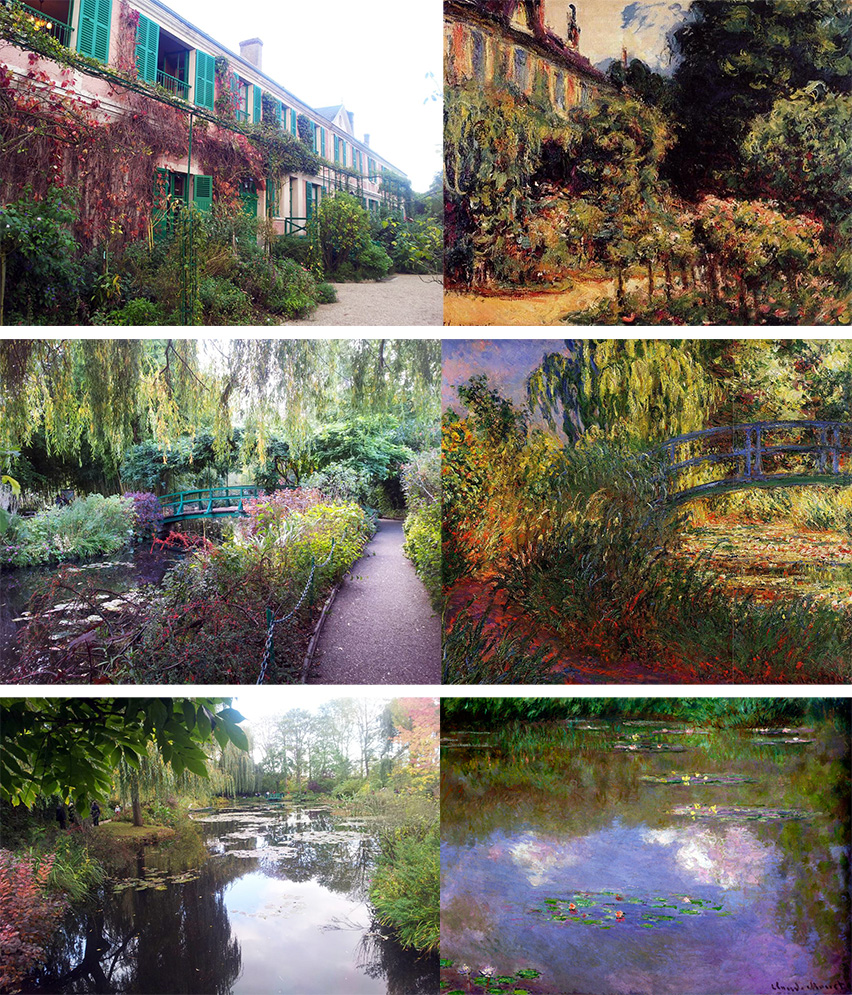 Claude Monet's Garden and His Painting

Claude Monet had constantly built this garden, his instructions to the gardener everyday contained specific planting layouts and the purchasing of flowers and botanical books. He enjoyed to paint the natures under his control, especially the water lilies and bridge in the yard.

In this period, Claude Monet created another series of works Rouen Cathedra by painting the same subject under different lighting conditions, he chose 20 different angles and times of a day to depict this cathedral. 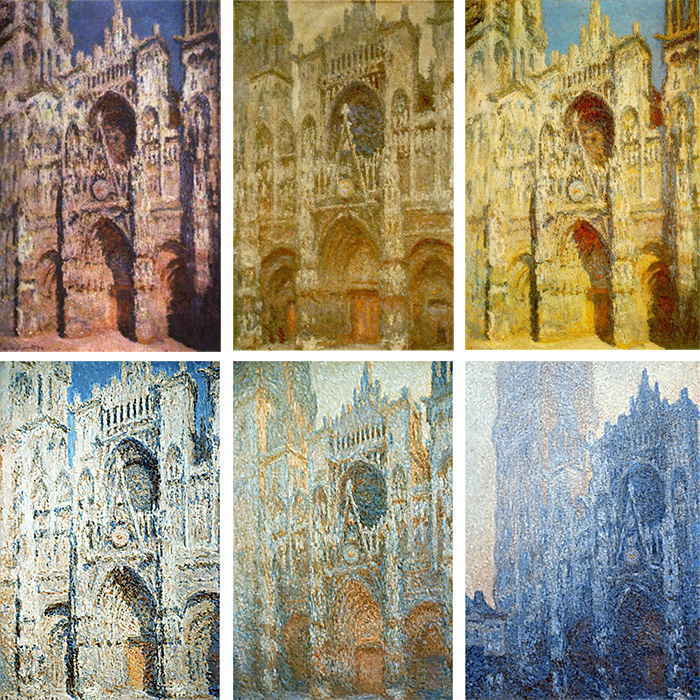 He also painted other series like Poplars, The Houses of Parliament and Charing Cross Bridge. During this time, the initial symptoms of cataract started to show on him, the paintings have more red tones than before.

Since 1912, Claude Monet's vision was getting worse that made his creation got more difficult. The water lilies in his paintings became bluer due the affection on cataract. 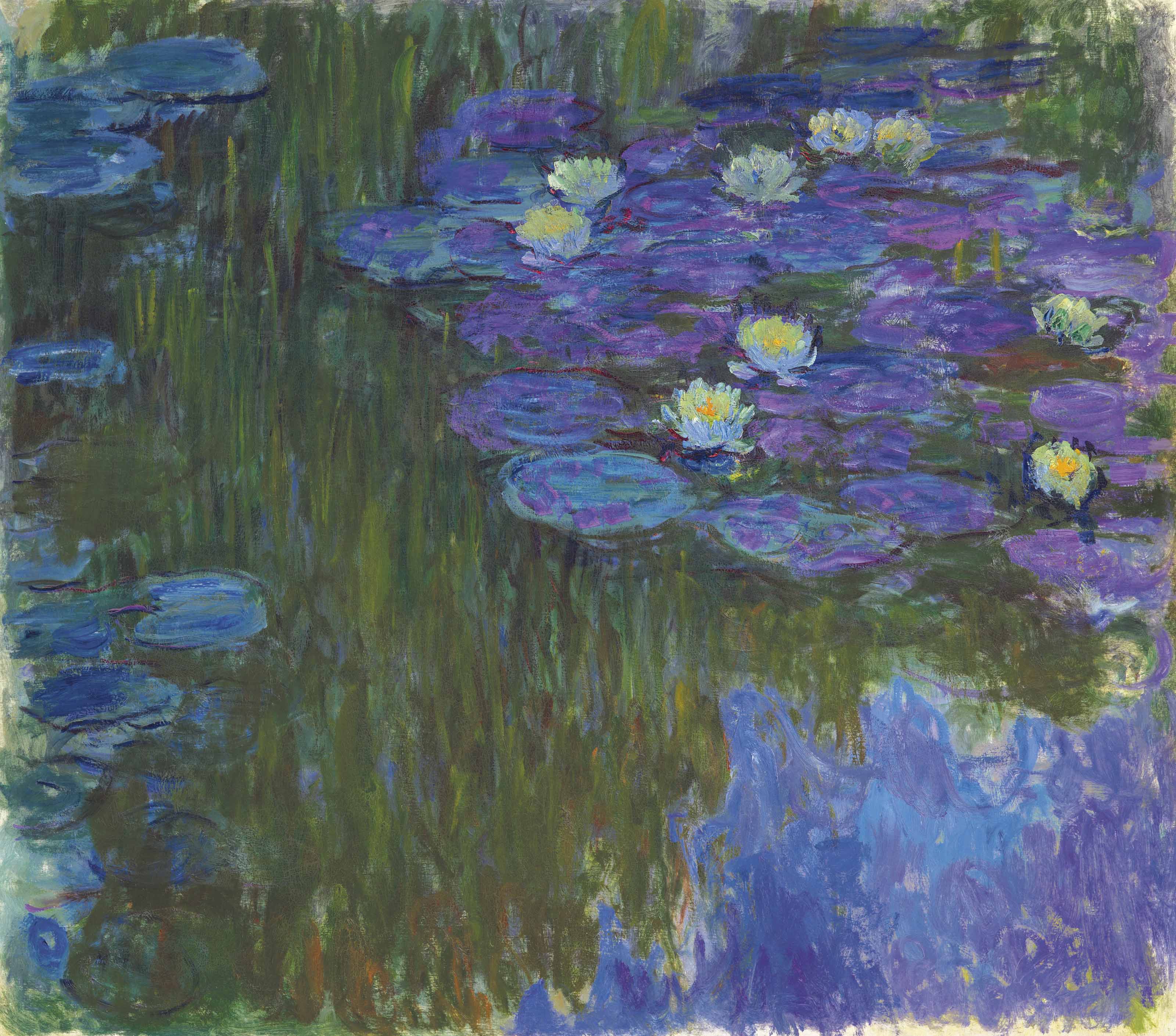 Claude Monet tried many ways to cure the cataract, like those glasses with colors to adjust the yellow toned world in his eyes. When his vision got better for a time due to a certain treatment, he will feel the tension: "to work harder and paint everything before lost sights completely." Beside the pond, he also explored the every corner in this garden with florid flowers of all four seasons.

From many of these works, it's clear that the eye disease had weaken his ability of observing and sensing the colors. For example, in a painting of the Japanese bridge that covered by wisteria, the color of this painting got bizarre and almost unnatural. The canvas was cover by multi-layers of pigments, and the contour of subject has lost in wild strokes, we can only distinguish the outline of bridge by looking from a far. When look closely, the piled up pigments make it looks like sculpting rather than painting.

In November 12 at 1918, the day after "Armistice of 11 November 1918" was signed that ended First World War, Claude Monet decided to create a "monument of peace", that includes multiple large scale, two meter heighted paintings of water lilies and donated to France. The French Prime Minister Georges Clemenceau agreed to exhibit these works at Musée de l'Orangerie in Tuileries Garden in Paris. Soon after Claude Monet's death (passed away in 1926, at age of 86 due to pulmonary fibrosis), Musée de l'Orangerie exhibited 8 pieces from these series of works, they are still in the museum until now.