In 2019, Liu Ye has been exceptionally smooth in the ever-changing art market. He tops the list of Chinese contemporary artists with a turnover of more than 50 million US dollars. And in the 2019 sales, Liu Ye made it into the Top 10 with seven works. Since 2020, 37 of his works had been auctioned with a sold-by-lot rate of 97%. Of these, 83% of the works have been changed hands over the estimating price, and 6 pieces exceed 1 million US dollars. On July 9, the large-scale oil painting Leave Me In The Dark jumped to the personal list of Top2, which continued Liu Ye’s popularity in 2019. Today, ArtPro will take you closer to the focal artist of the auction market.

Liu Ye was born in Beijing in 1964, majoring in Industrial Design at the Arts and Crafts School of Beijing and Murals at the Central Academy of Fine Arts. He graduated from the Berlin Academy of Fine Arts in 1994. Until now, Liu Ye has recorded more than 600 auctions, covering oil paintings, watercolors, prints and sculptures. And the typical images in his works include the child with round head, Miffy rabbit and Piet Mondriaan's grid. Liu Ye combines the quintessence of Eastern and Western cultures from the techniques of classical giants to the style of minimalism. His creation has gone through four stages: the early stage (1994 and before), the first transformation (1995-1999), the second transformation (2000-2009) and 2010 to the present, showing a unique Liu Ye Language.

4. The main battlefield of sales is concentrated in Hong Kong for years, and the pattern remains unchanged in 2020. 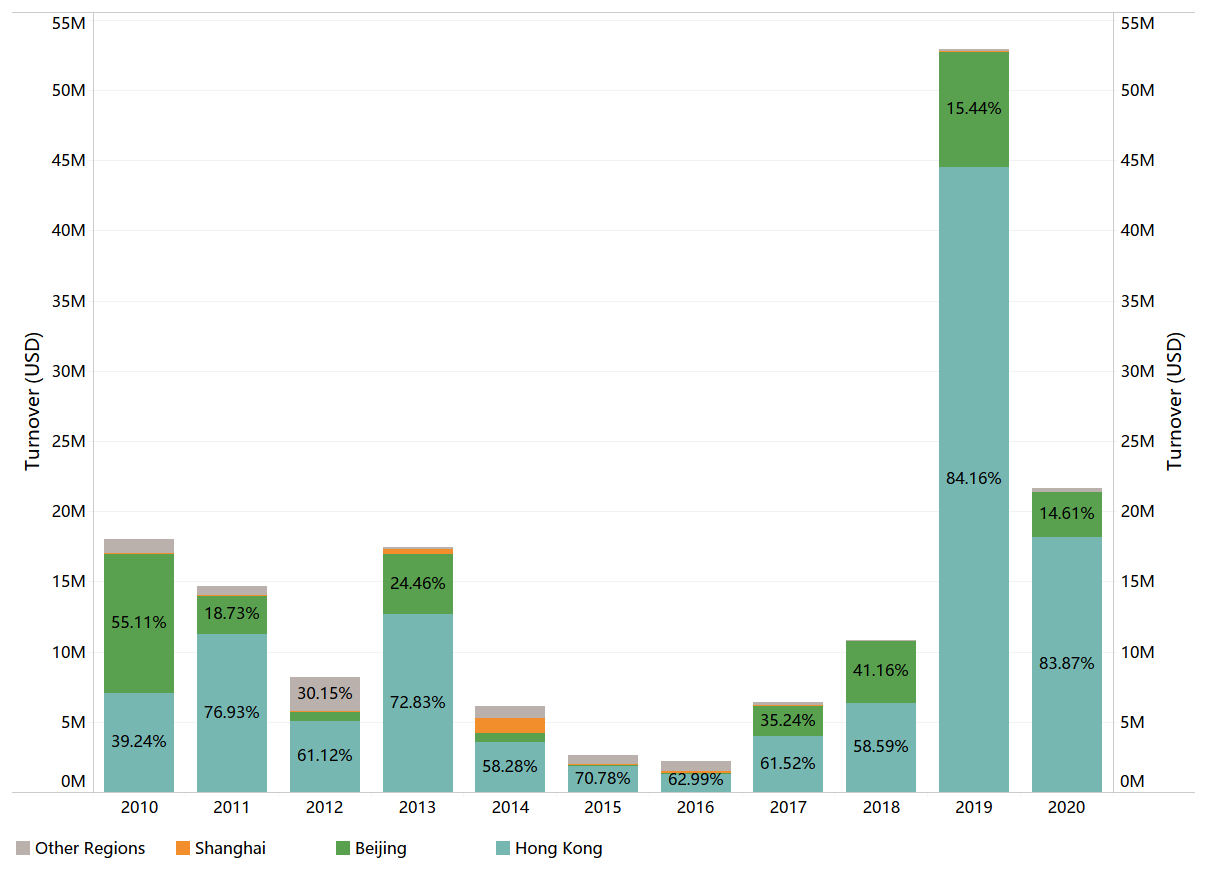 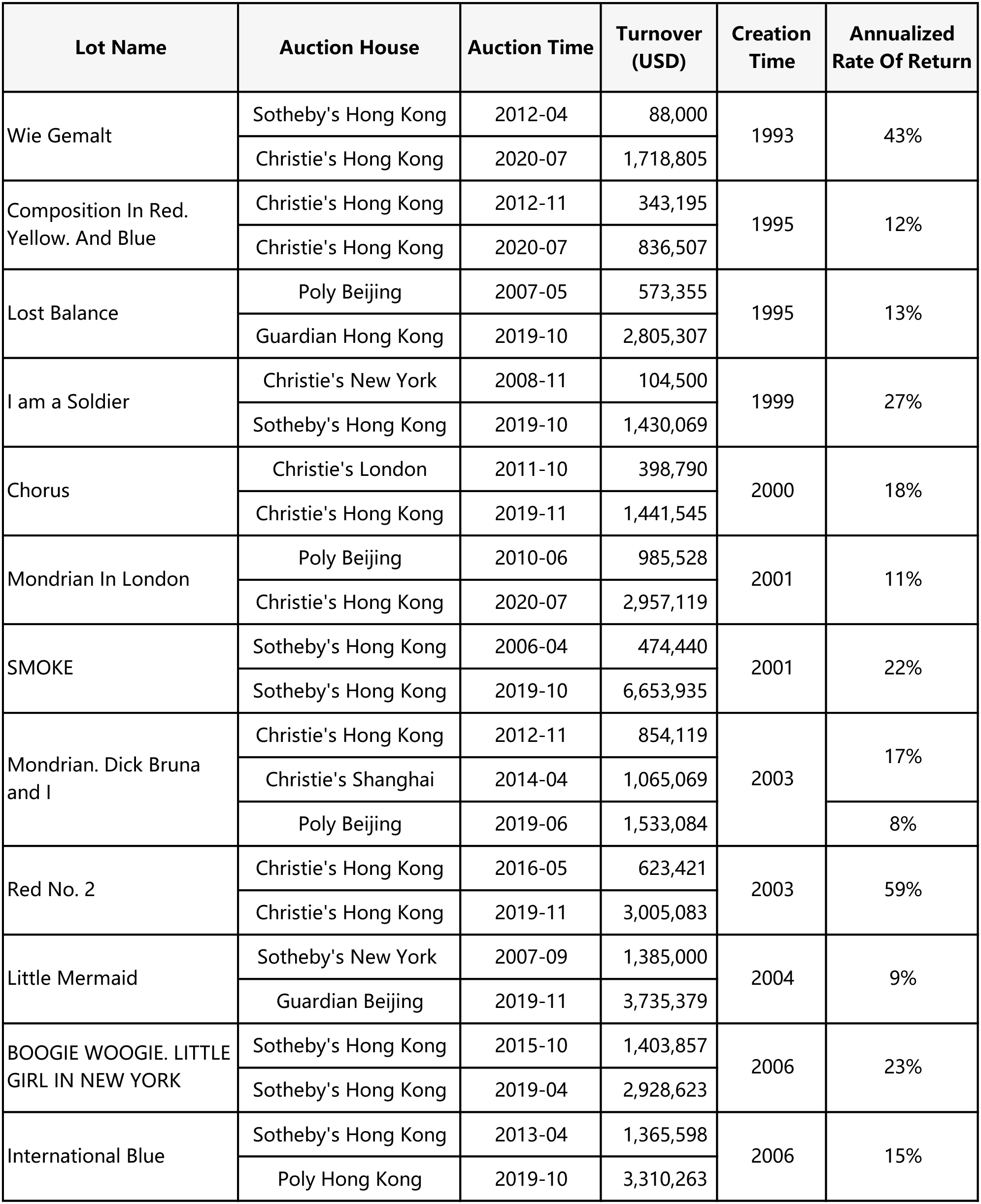 Liu Ye's father is a children's literature writer and screenwriter, and his mother is a high school Chinese teacher. Growing up in such an environment, Liu Ye had a happy childhood. From an early age, he began to read some classic children's literature works such as Hans Christian Andersen's Fairy Tales and the Secrets of Bao Hulu. From 1990 to 1994, Liu Ye studied in Berlin. In a foreign land, he fully realized the loneliness of "speaking Chinese in front of a mirror" in Bei Dao’s poem. Therefore, he depicts the inner fairytale world with a paintbrush and uses the mirror as a way of self-expression. At that time, most of his characters were imaginary himself. During Berlin period, Liu Ye studied the history of western art and the theory of architecture deeply, and got inspiration from the works of western art giants. In the paintings of the early 1990s, the influence of Europe on Liu Ye was visible. Paintings with calm colors, rich strokes and strong narrative are easily reminiscent of Giorgio De Chirico, Baltusz Klossowski, René Magritte and even the older Nordic Renaissance paintings.

Among them, the Dutch painter Piet Mondriaan had the most far-reaching influence on Liu Ye —— the bright and saturated colors, the minimalist composition between vertical and horizontal lines greatly inspired him. Piet Mondriaan's grid appears in Liu Ye's creation frequently.

Between 1991 and 1994, Liu Ye's paintings rarely exceeded 50 × 50cm. II Riassunto, created in 1993, is a masterpiece of this stage. Referring to the techniques of western masters and combining his own perspective, Liu Ye created an artistic schema with distinct personal style. In 2013, II Riassunto sold 9.43 million yuan ($1.54 million) in Guardian Beijing. 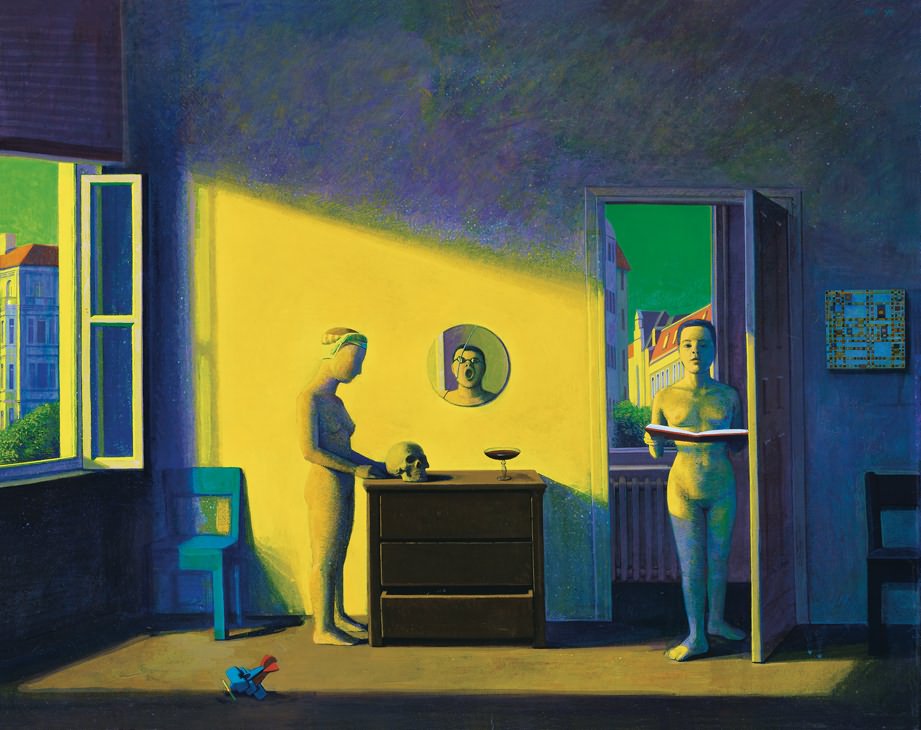 When Liu Ye returned to China in 1995, he began to create large-scale paintings, and the style and theme of his works also changed. He began to portray himself from a young man as a little boy, and the background of the painting moved from the room to the theatre. In addition, there are more female images in the works. During this period, choir, fleet and sailor boy are recurring themes in Liu Ye's works. Lovely and vivid images staged lots of mini stage plays.

Liu Ye often sets the tone of his paintings in the primary colors of red, yellow and blue, while the appearance of red in a large area is related to his childhood memory. He used to recall "I grew up in a world covered with red, with red sun, red flag and red scarf." LIU YE QI Dated 1996 BAISHI KNEW MANDRIAN set Liu Ye's personal high price in 2010 with 29.12 million yuan ($4.38 million). 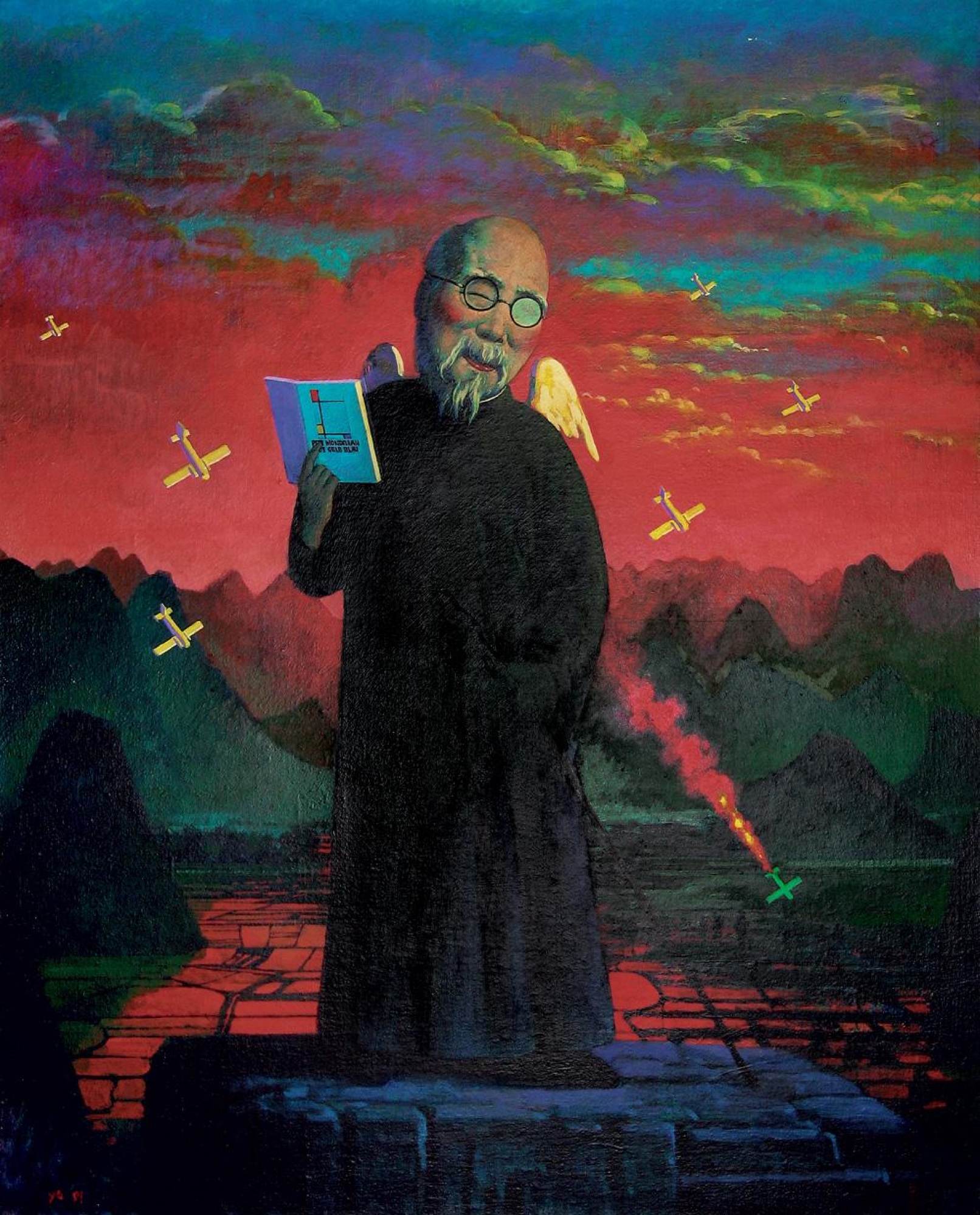 By 2000, Liu Ye began to lean towards minimalism and abstract painting style. He turned his attention away from himself and began to depict the characters he was interested in, such as Maggie Cheung, Zhou Xuan, Ruan Lingyu, Zhang Aling, Teresa Teng and so on. Liu Ye combines classical and similar cartoon ways, showing the strong emotions of the characters. 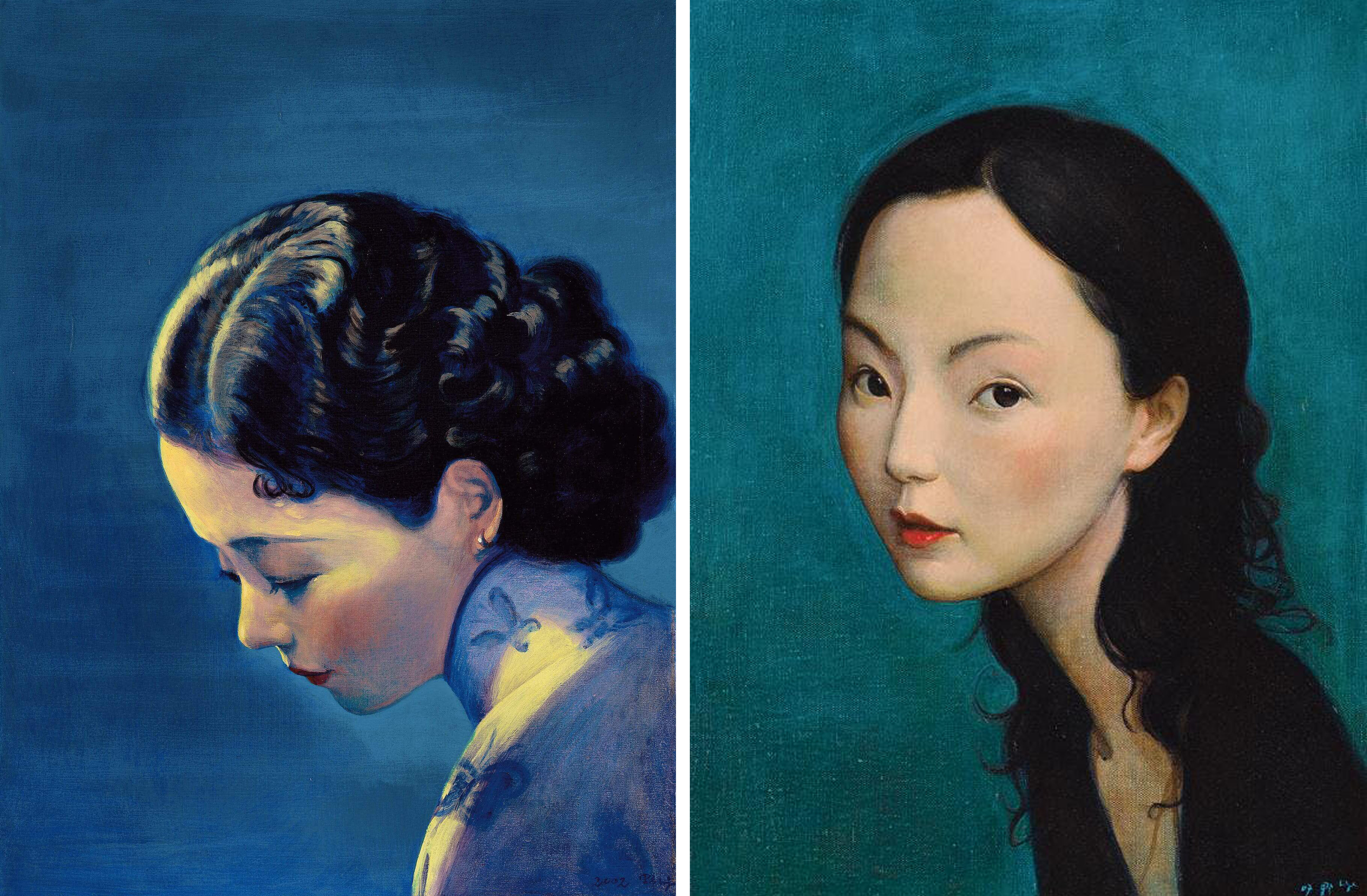 During this period, the images from children's literature classics which Liu Ye has been nurtured since he was a child, such as the mermaid, Hans Christian Andersen and the little match girl, were also rewritten in his increasingly mature painting style. In 1998, Liu Ye first saw Dick Bruna's Miffy in the Netherlands and thought they were lovely, simple but unfathomable. Since then, as a kind of self-image projection, Miffy rabbit began to appear in Liu Ye's paintings. The Piet Mondriaan symbol also reappears, depicting with a little girl, a boy, or Miffy.

In the paintings of the late 2000s, an adolescent girl appears again and again, either reading or on a journey. The large-scale painting, Leave Me In The Dark, made in 2008, updated Liu Ye's most expensive personal turnover Top 2 on July 9, 2020.

Smoke, which was created between 2001 and 2002, is not only Liu Ye's masterpiece after his return to China, but also Liu Ye's current highest auction price lot. It not only combines the classic images of Western masters such as René Magritte and Johannes Vermeer, but also embodies the techniques of Chinese landscape painting.

Liu Ye's works completed at this stage are rarely in circulation in the auction market. Among the records of appearances, one work worth more than a million dollars has been created so far in 2010, which is from Painter and Model in 2010. Two spectator-facing Miffy rabbits were close and separated, and they sold for 10.325 million Hong Kong dollars (US $1.31 million) in Christie's Hong Kong in May 2019. 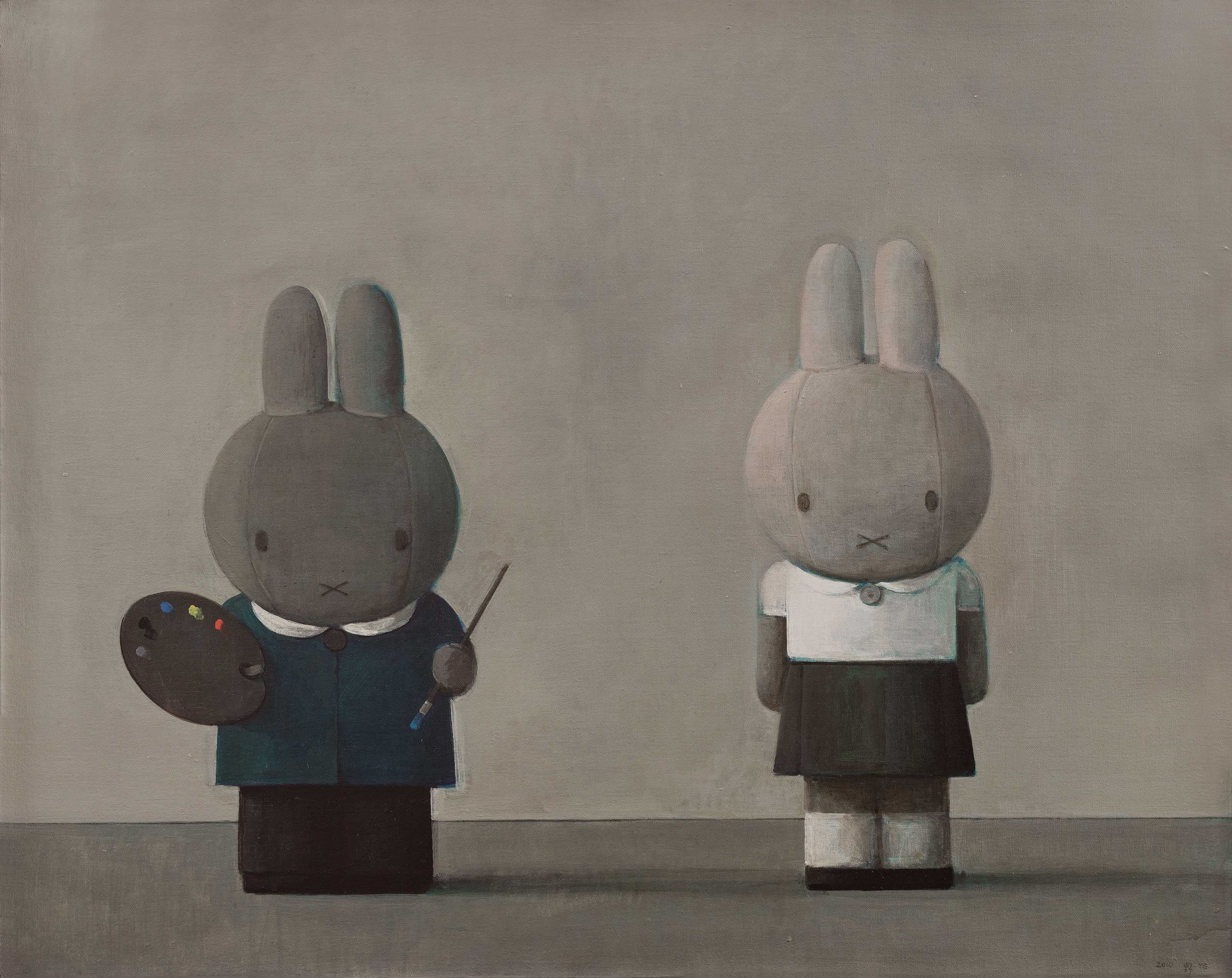 The market explosion seems to be only overnight, but it is the result of years’ hard work by artists. During his stay in Germany, Liu Ye received the first funding from a gallery. In 1993, Liu Ye held a solo exhibition in Berlin. After returning to China, Mingjingdi Gallery began to represent Liu Ye's paintings exclusively. In 1997, Liu Ye held his first solo exhibition in China. Since 2001, his solo exhibition has spread to many countries and regions around the world. In 2017, Liu Ye's works appeared at the 57th Venice Biennale. In 2019, the artist was announced as an agent by David Zwirner, which further boosted Liu Ye's performance in the market.To acquire more information of artists, please contact our ArtPro customer service.