On June 5, 2021, Holly's International Beijing Spring Auction Session "Modern and Contemporary Art Evening Sale” has finished. There were 24 lots on display, with a total of 364 million turnover. All of the works were sold and achieved a white glove sale. San Yu's masterpiece Chevaux received the top 1 place. Chevaux started at a price of CNY80 million, after fierce bidding it has rose up to 100 million. In the end, the piece was sold at CNY180 million, the total include a commission fee is 207 million. It has been sold to No. 8630 buyer and became the most expensive lot in the Animal Series of San Yu and was included in the top 3 priced works in his personal list. A number of artists set new records, among them Damien Hirst, a well-known artist from overseas, his work Saint Bartholomew, Exquisite Pain was sold at CNY 44.28 million, breaking the auction record of his most expensive works sold in Asia. The Six sculptures of Marcus Lüpertz were sold for CNY4.14 million in Beijing, setting a new personal record. Atrium of Yu Hong was sold for CNY7.02 million, broke the auction record of the artist.

For this outstanding evening sale, ArtPro has exclusively interviewed Huang Xuan, the general manager of the Modern and Contemporary Art Department of Holly's International; and Lin Song, a senior art expert and the deputy secretary general of Art Gallery Association Beijing. They have analyzed the overall market situation and changes of contemporary art from the perspective of Holly's International Modern and Contemporary Art Evening Sale and the overall situation of modern and contemporary art evening sales in Beijing.

The general manager Huang Xuan of the modern and contemporary art department who was born in the 90s, has just been in office for less than a year. She leads the team of a group of young people with the same age as her. For the white glove sale of tonight, she is very satisfied with the performance throughout this evening, that has exceeds her expectations. This young team was strongly encouraged.

The evening sale of Holly's International has achieved a white glove with a total turnover of CNY 364 million, which is a significant increase compared to the previous Modern and Contemporary Art Evening Sale. The layout of the several sections in the whole game is very balanced, although there were not many classic pieces of San Yu in Guardian and Poly, but his performance in Holly's International were very strong.

Huang Xuan was passionate when talking about the exciting moments of San Yu's auctions. She believed that the several sales of San Yu's works at Holly's International had broken records for multiple times. Whether it was works on paper or oil painting, on the one hand, the team has a professional attitude to explore the academic value of the lots. There were several special exhibitions attracted much attention, and finally provided a satisfied result. On the other hand, the high-priced transactions of works has proved the collectors' demand for rare treasures once again, and their strong willingness to buy.

Chevaux of San Yu has broken his personal Top 3 list. In Lin Song's opinion this has reversed the situation that the domestic transaction of San Yu that has been always less than the records of overseas and Hong Kong. Tonight, the three commissions of San Yu's Chevaux are representatives of domestic institutions, which are different from the previous work Potted Chrysanthemums of San Yu. The domestic collection institutions and collectors have strong power, which also shows that these collectors have a deeper understanding of this recognized master of San Yu.

Pan Yuliang and Yu Hong, two female artists has performed very well in the contemporary art evening sale of Holly's International. According to Lin Song, from the perspective of the overall market of female artists, he found that female artists are on the rise in the entire international market, although the outstanding female artists are still rare. Pan may set a better record in the future, as most of her works are collected in museums the price of hers will rise up soon. Yu Hong's heavyweight work, is such a representative of the emergence of art museums, collection institutions will be attracted. To some extent, their good deals tonight will drive the growth of the market of female artists.

Huang Xuan believes that the sales of female artists from Holly’s International tonight allows us to see that the female artists as a group in China is getting more attention from the market. We hope that more people will pay attention to them, closing the gender gap, focus on outstanding artists and the works themselves.

Looking at the modern and contemporary sections of Guardian, Poly and Holly's International, there have been a special session focusing on the Chinese artists who were born in 70s and 80s. Lin Song said with emotion that these young Chinese artists have come a long way from a small group in the auction to having a standard special session at present. Poly also had 100% transactions, Guardian is 96%, and Holly’s International has achieved 100% as well. The market transactions were active and real, which once again proved the attentions on these new artists of 70s and 80s. It also reflects the fact that we representative young artists to carry on the banner and the future of the market.

From the interviews of the two experts, we can see that the modern and contemporary art section of the various auction houses in the 2021 spring auctions are going up strongly, we look forward to the future!

The auction of San Yu's masterpiece Chevaux started at CNY80 million, after fierce bidding the price soon rose to 100 million. In the end, it was sold to the No. 8630 buyer at CNY180 million and total include commission fee is CNY207 million. This work has become the most expensive lot in San Yu's animal series and the top 3 work in his personal list. It has been published many times and participated in exhibitions in Paris. 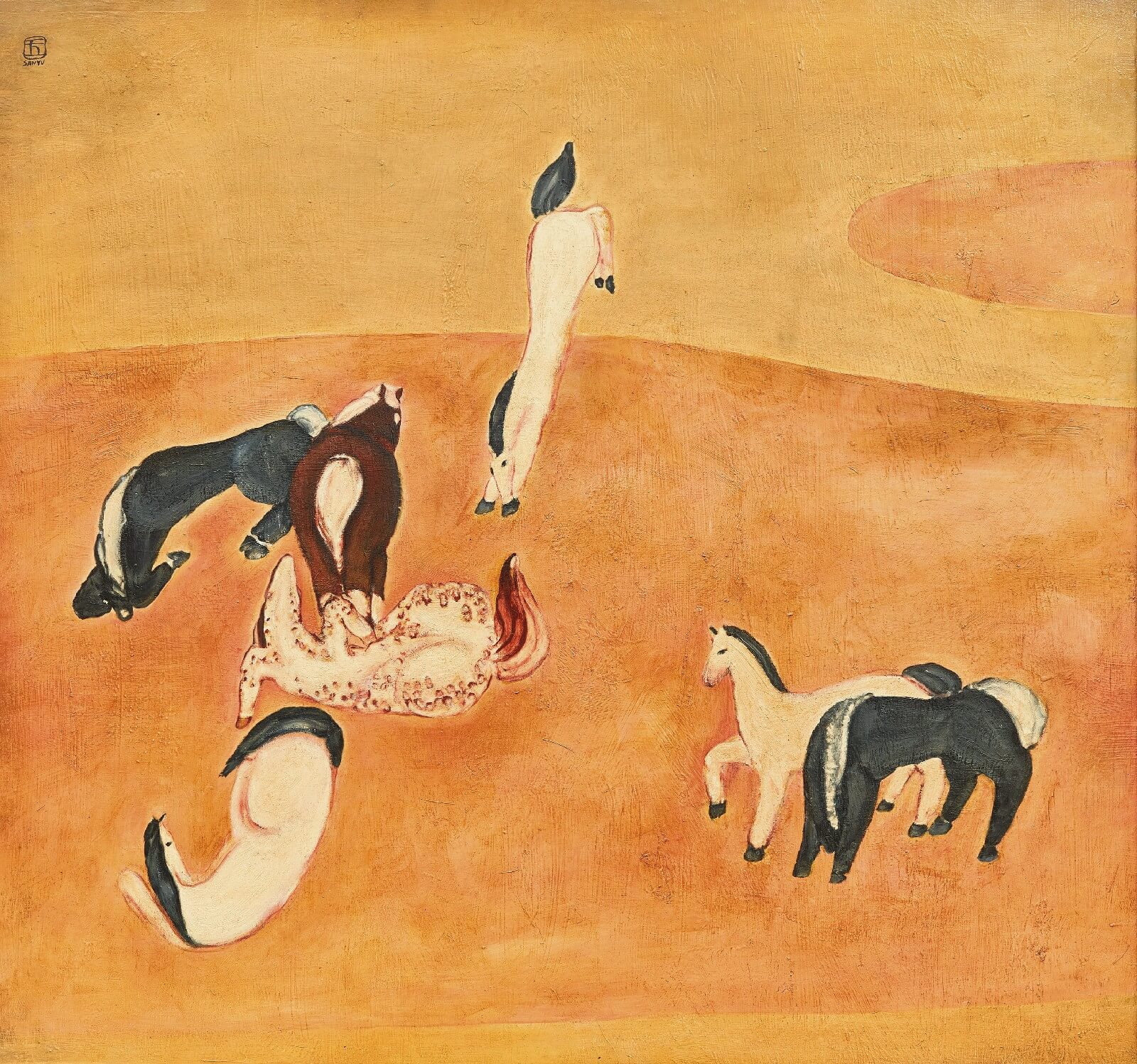 Damien Hirst's Saint Bartholomew, Exquisite Pain was valued at CNY 22-30 million. After fierce bidding, the last two buyers started a seesaw battle. The works was hammering at CNY 36 million, include a commission fee is 41.4 million, received by No. 8565 buyer. (Broke the record of HKD15.5 million in Hong Kong) 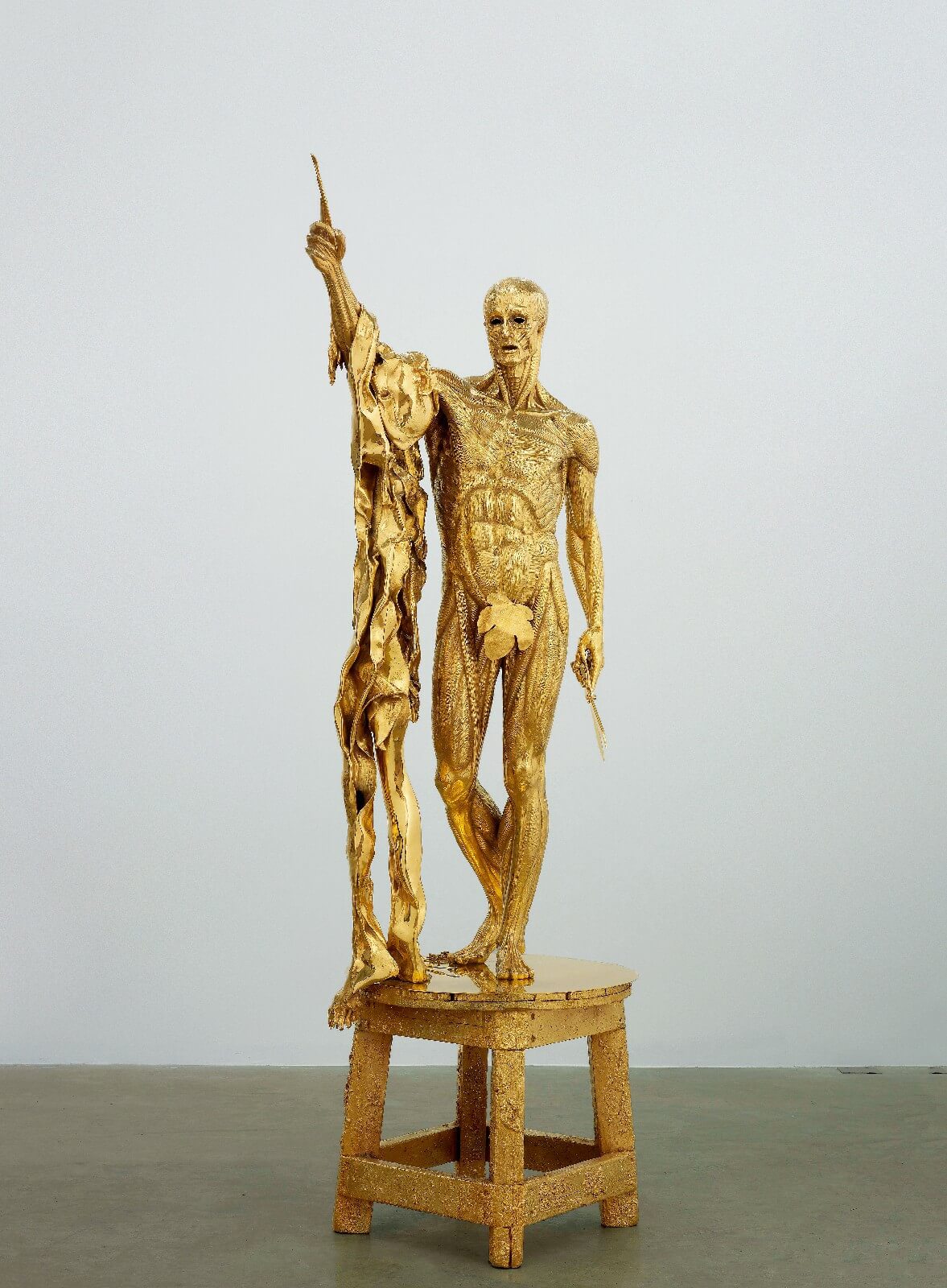 Atrium of Yu Hong with an estimate of CNY3.5 to 5 million, starting with 3.5 million, after fierce bidding on the site and network, it was sold to No. 8310 buyer at a price of CNY6.1 million, plus commission fee to 7.02 million. (broke the record of HK $5.06 million set by Portrait With Alternating Red and Green in 2011 at Sotheby's Hong Kong). This work has been published twice, with two exhibitions, that attracted much attention. 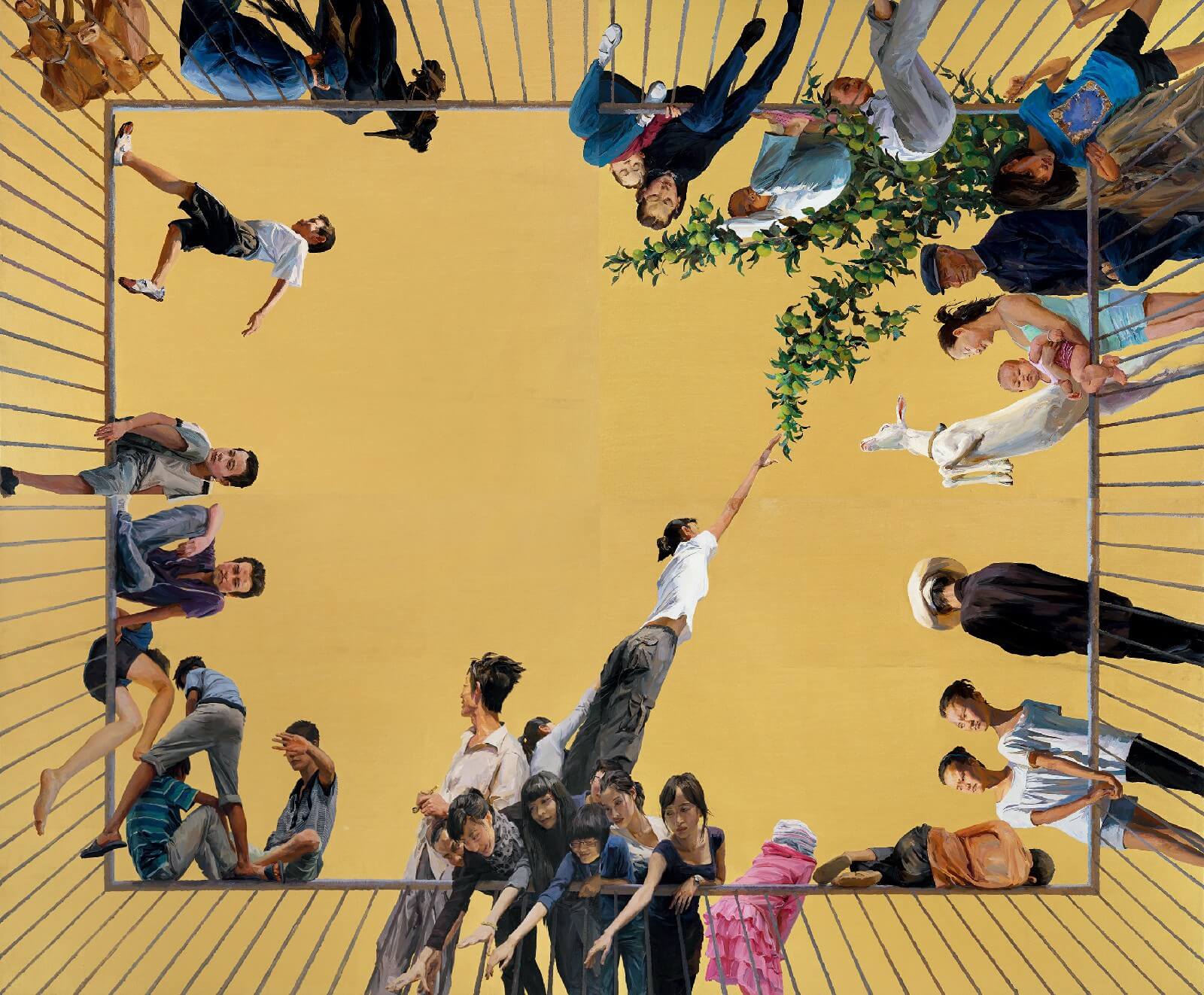 Markus Lüpertz's six sculptures have long been the focus of attention before auction, Bronze Statue Of Piedrasanta Actor, Toy Action, Man And Blue Ball, Woman And Mirror, Gardener, Maidservant (a Set Of Six) had four exhibitions, estimated at CNY3.2 million to 4.5 million, sold with 3.6million, the total plus commission fee is CNY4.14million, received by No.8225 buyer, which has created a new auction record of the artist. 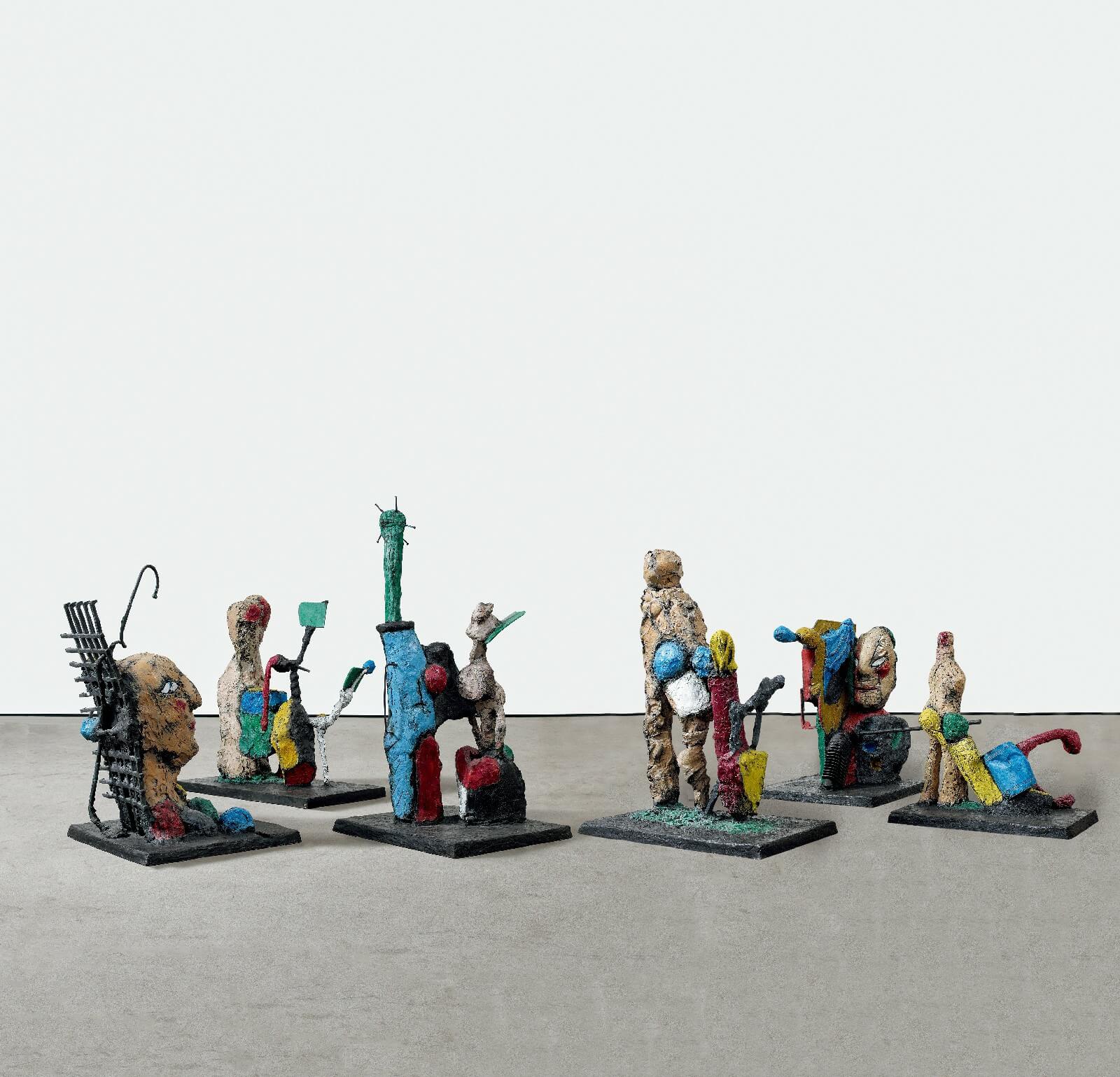 Since 1950, Pan Yuliang's painting has opened up a new field --the body painting with color ink. He has combined Chinese painting, oil painting and "modernity" into one, and carried out the visual transformation effect and the expression of "Oriental Sentiment", which is the developing period of "Combining China and the West". Shuangmei Pingting (1963) is a masterpiece of this period. After more than ten bids, it was sold for CNY12.8 million, the total plus commission fee is CNY14.72 million. 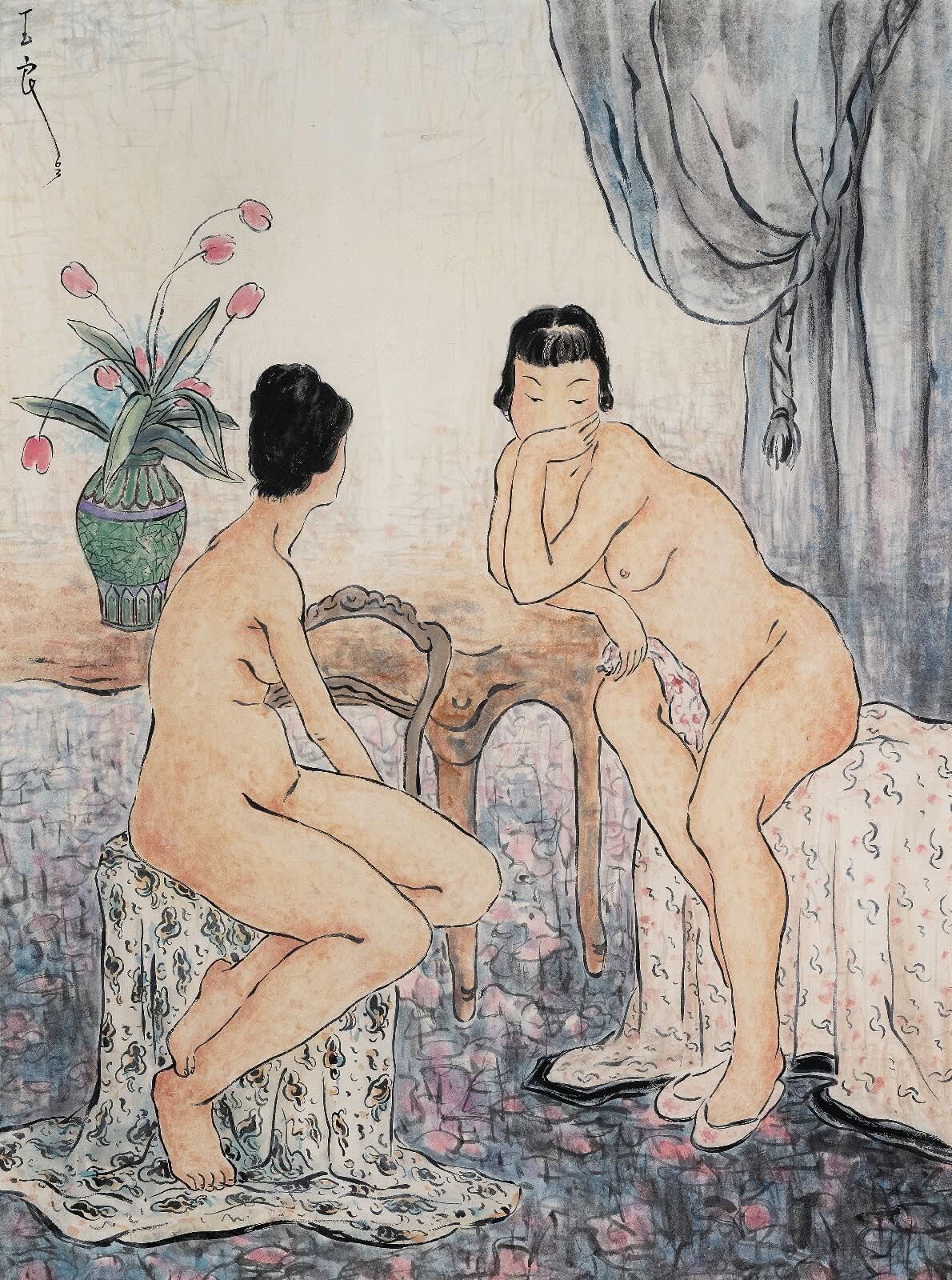 In addition, the works of Chinese artists who had studied in France were also the focus of this auction. Zhao Wou-Ki's 5.10.93, created in 1993, was sold to No.8257 buyer with CNY8.5 million and total CNY9.775 million include commission fee. Zhu Tequn's On the Horizon was created in 2005, is an interpretation of the lyrical poetry of China and the West. 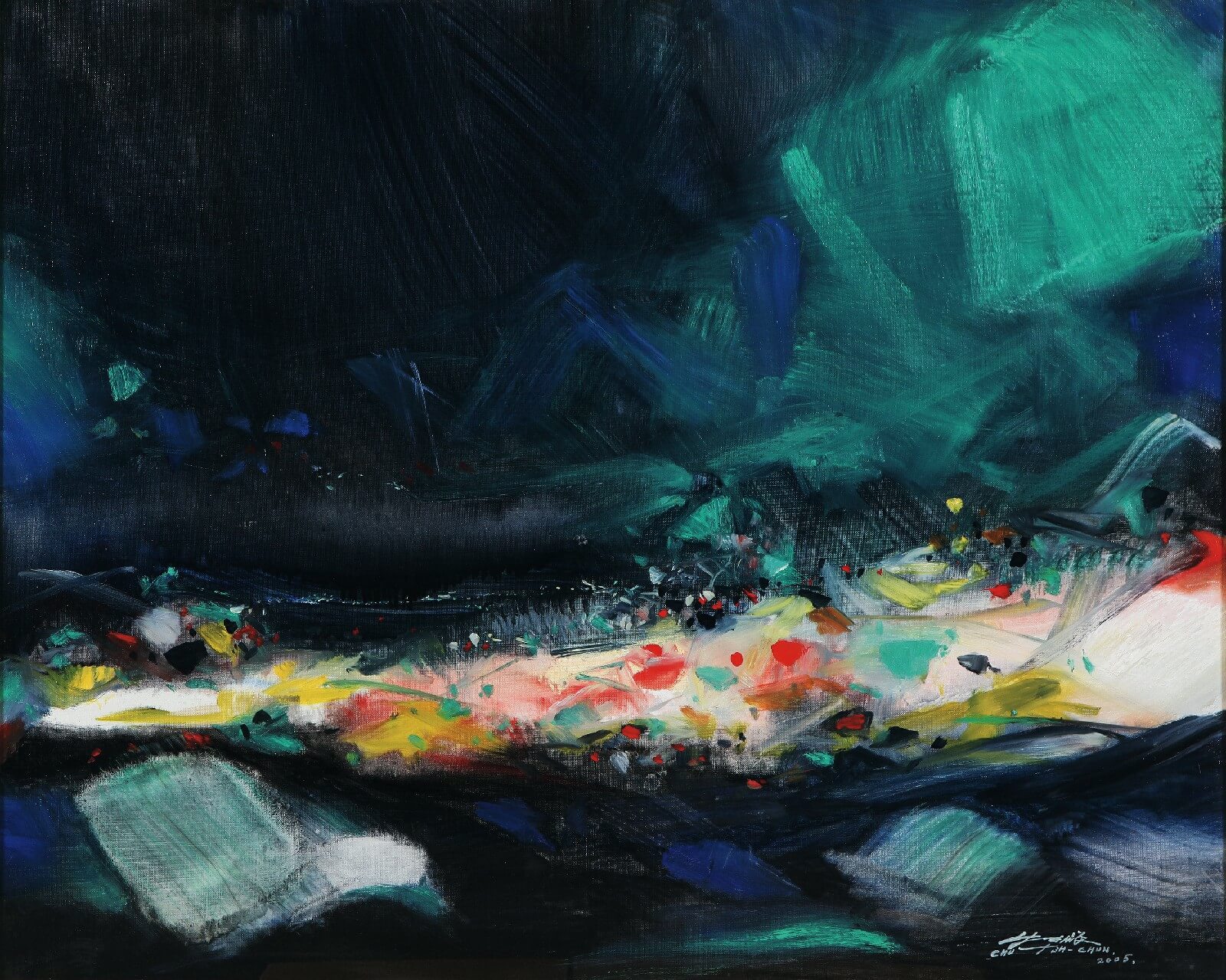 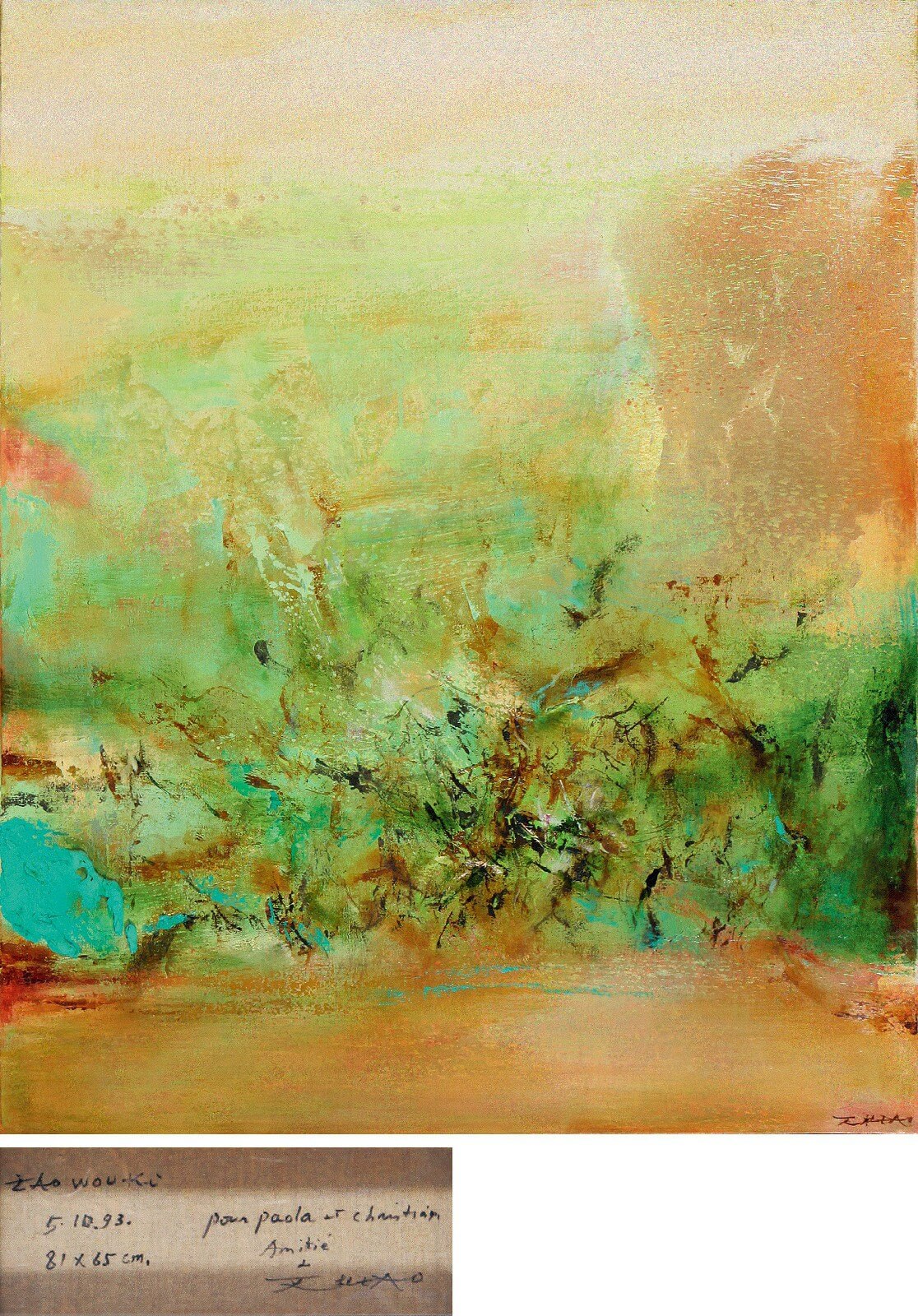 Except for these, the two still life works of Pan Yuliang are not only rare historical materials for studying his art, but also the best representation of her artistic accomplishments at that time.