The content of this article is provided by Sotheby’s Hong Kong. For more details of the lots, please check this auction.

Sotheby’s Hong Kong Modern Art Evening Sale, scheduled on 8 July, will be led by two extremely rare and magnificent works: San Yu’s Quatre nus, the only masterwork that was part of a set of three completed oil paintings of similar composition, and the largest of the three; and Chu Teh-Chun’s Les éléments confédérés, the artist’s only pentaptych in his lifetime and his largest oil painting still in private hands. Hailing from Zao Wou-Ki’s Hurricane Period, 20.03.60 and 19.11.59 will be offered as a group of seven oil paintings by Zao.

Following the success of our curated sale last year, this season’s Modern Art Evening Sale brings together a remarkable group of works by legendary artists in the history of modern art from across Asia and Europe, including Georges Mathieu’s La liberation d’Orléans par Jeanne d’Arc, Bernard Buffet’s Le cri and a themed section of works by the renowned Chinese female painter Guan Zilan.

Vinci Chang, Sotheby’s Head of Modern Asian Art, commented: “The theme this season, ‘Modern Icons’, is the grand finale of our trilogy honouring the legendary icons and classic styles from the history of modern art, building on last year’s ‘Modern Rangers’ and ‘Modern Vision’. In the centenary year of Chu Teh-Chun’s birth, we feel privileged to offer the only five-panel masterwork he created in his lifetime and pay our respects to this epoch-defining, world-class Chinese painter. San Yu is another highlight of the season. Following the record-breaking sale of Nu at HK$198 million last autumn, the offering of his extremely rare female nude group painting, Quatre nus, is set to draw strong interest from collectors worldwide.”

THE ONLY PENTAPTYCH IN HIS OEUVRE

Les éléments confédérés is the largest Chu Teh-Chun oil painting in private hands and the only pentaptych by the artist. Executed between 1983 and 1984, the work was painted upon Chu’s return to Asia and marked the beginning of a new chapter in his career: in 1987, the National Museum of History in Taipei held a large retrospective exhibition for Chu, marking his formal return to Chinese society after residing in France for 32 years. Les éléments confédérés graced the cover of the exhibition catalogue, a mark of its extraordinary importance. In 1990 and 1991, this work was the focal point of Chu’s “Grand Formats” exhibitions at the Pyramid Pernod in Créteil, and Musée d’Art Contemporain in Dunkerque, France. Chosen as the catalogue cover for Chu’s retrospective exhibition at the National Art Museum of China in Beijing in 2010, Les éléments confédérés was the most important work to feature in the show, a testament to the painting’s significance in the eyes of the artist. According to Madame Chu Ching-Chao, the wife of Chu, the choice of a pentaptych echoes the Chinese philosophy of the Five Elements; and the rich layers of green pay tribute to nature and Beethoven’s symphony N°9, an expression of the artist’s passion for his motherland.

Life and art for San Yu were reaching new expressive peaks in the post-war 1950s, and his creations depicting a group of nudes marked a breakthrough. This is the only masterwork that was part of a set of three completed oil paintings of similar composition in San Yu’s lifetime, and the largest of the three. Featuring four nude women in repose against a green background, this composition signifies the post-war revival and society’s new-found freedom. 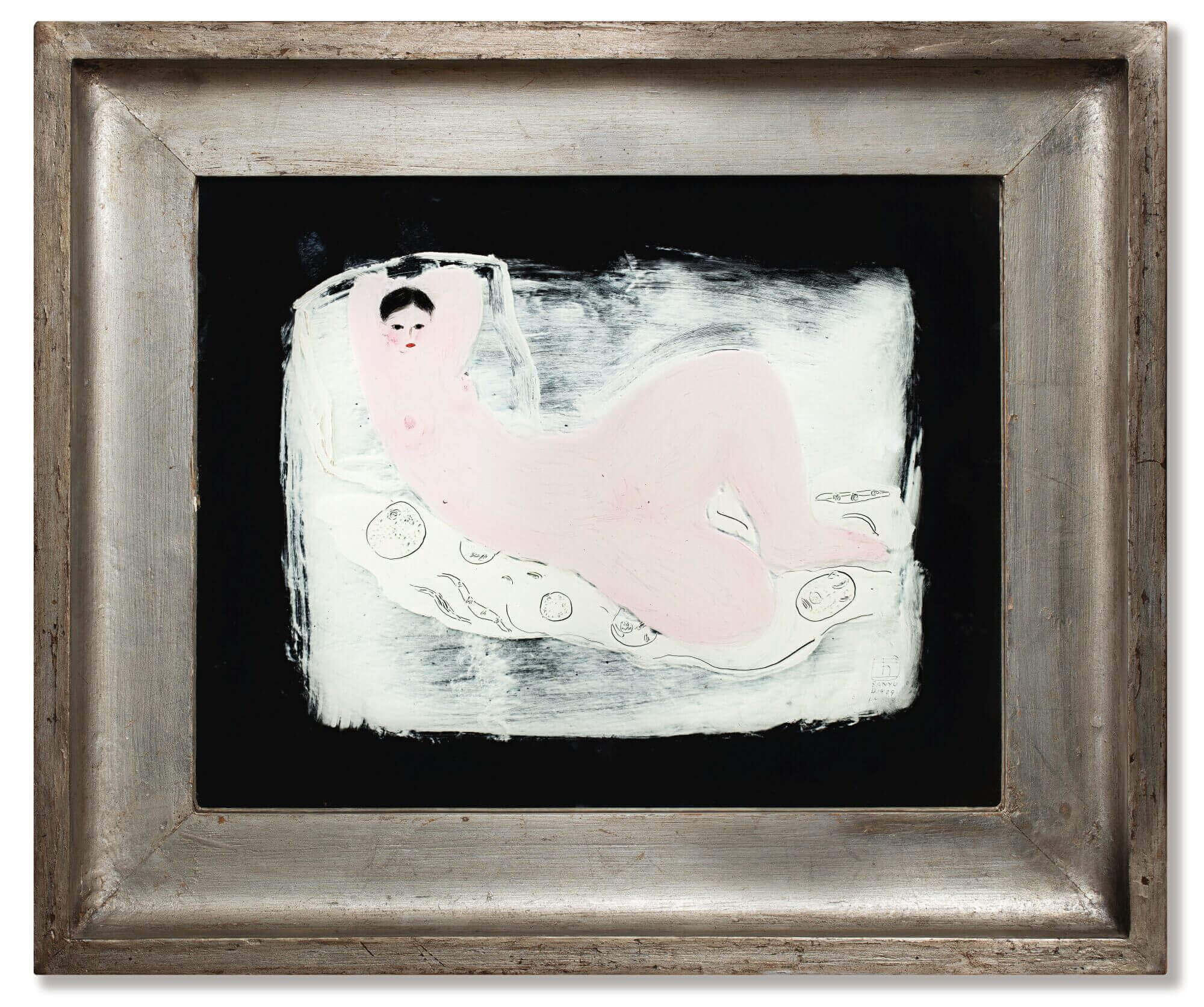 San Yu painted on mirrors, drawing inspiration from Dream of the Red Chamber, one of the four great classic novels of Chinese literature. He created only 14 works of oil painting on mirror, of which four were lost; only three have ever appeared at auction. Femme nue etendue is a painting on mirror featuring a rare nude in this medium, while Panier de poires is one of the artist’s most richly symbolic still-lifes, depicting objects that carry auspicious meanings in the Chinese tradition. Both works have impeccable provenance, having been formerly owned by San Yu’s dealer Henri-Pierre Roché in the 1930s, and now they are making their first appearance at auction in almost 90 years. 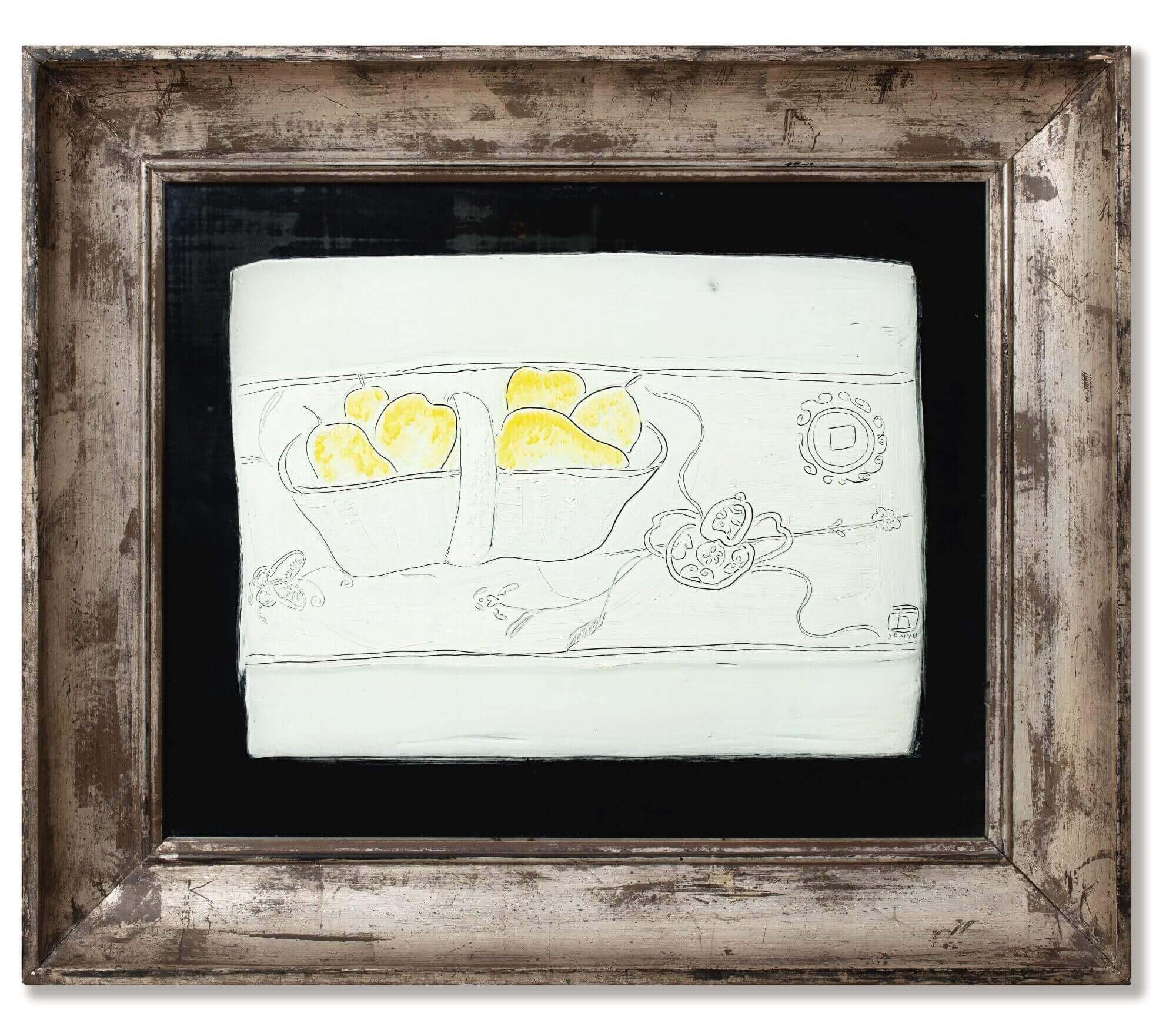 Created at the peak of Zao Wou-Ki’s Hurricane Period, this rare masterpiece reinterprets Chinese traditional landscape through expressionist techniques and is appearing at auction for the first time in 60 years. The work has been exhibited extensively, at Galerie de France in Paris, Galleria Vicica d’Arte Moderna in Turin, and at Zao’s first museum retrospective exhibition in Germany, a show that established his status as a pioneer in international post-war abstract art.

This work marked the beginning of Zao’s Hurricane Period, featuring bright blues and a white halo at the energy centre, reminiscent of blue and white porcelain as well as one of the best-known oil paintings by J.M.W. Turner. The work began its collecting journey with Kootz Gallery before entering the collection of Upjohn Company where it remained for the next 40 years, during when it was part of a long-standing display at the company’s U.S. headquarters, a reflection of the artist’s prominence in the American art scene. 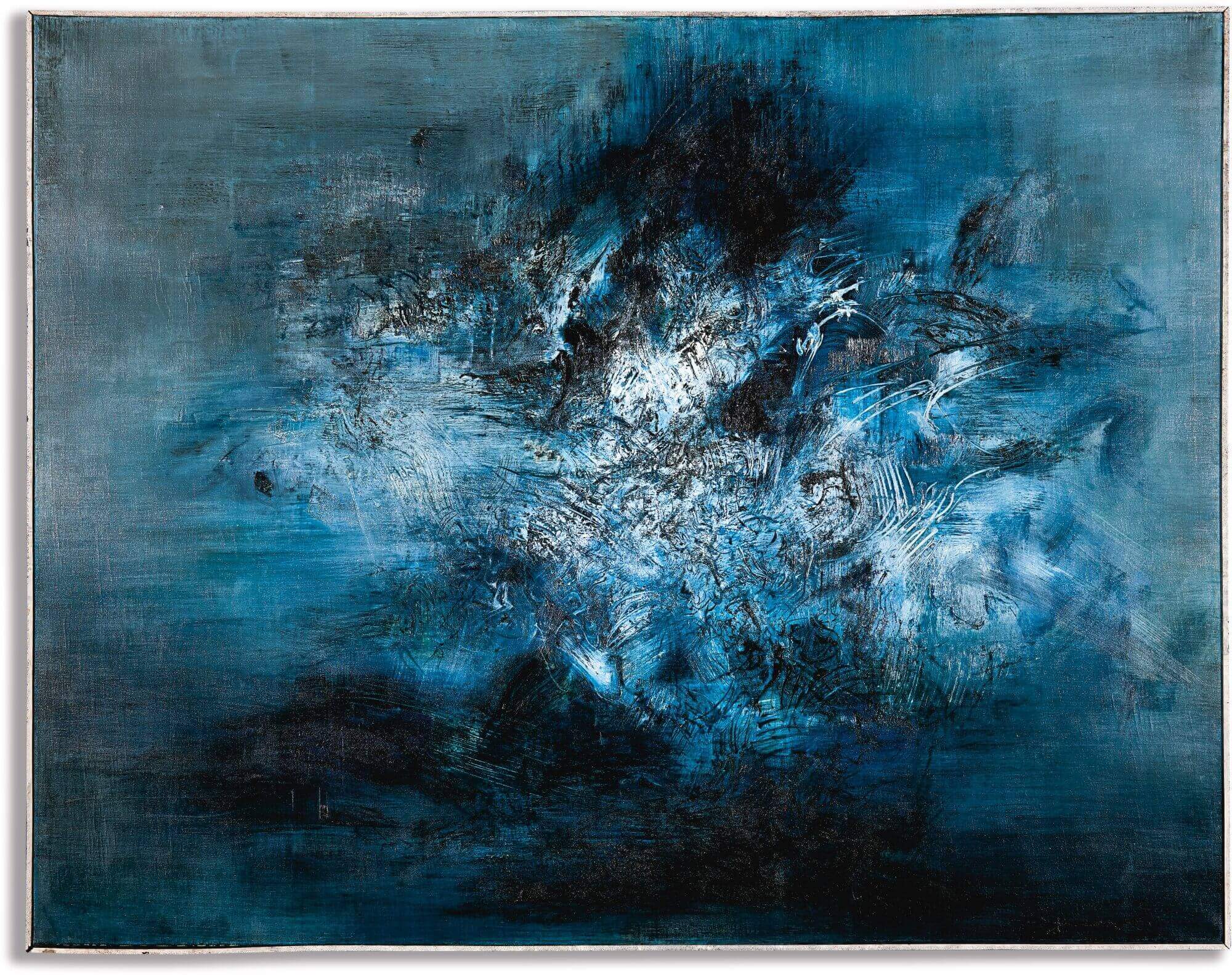 Bright and luminous, this magnificent painting marked a milestone in Zao Wou-Ki’s creative journey during the 1980s. Drawing inspiration from both Eastern and Western cultures, 29.02.88 pays tribute to Claude Monet and Henri Matisse, while echoing the artistic effects of Chinese splashed ink. This work will make its debut at auction, further to being featured in two monographs on Zao in the 1990s. 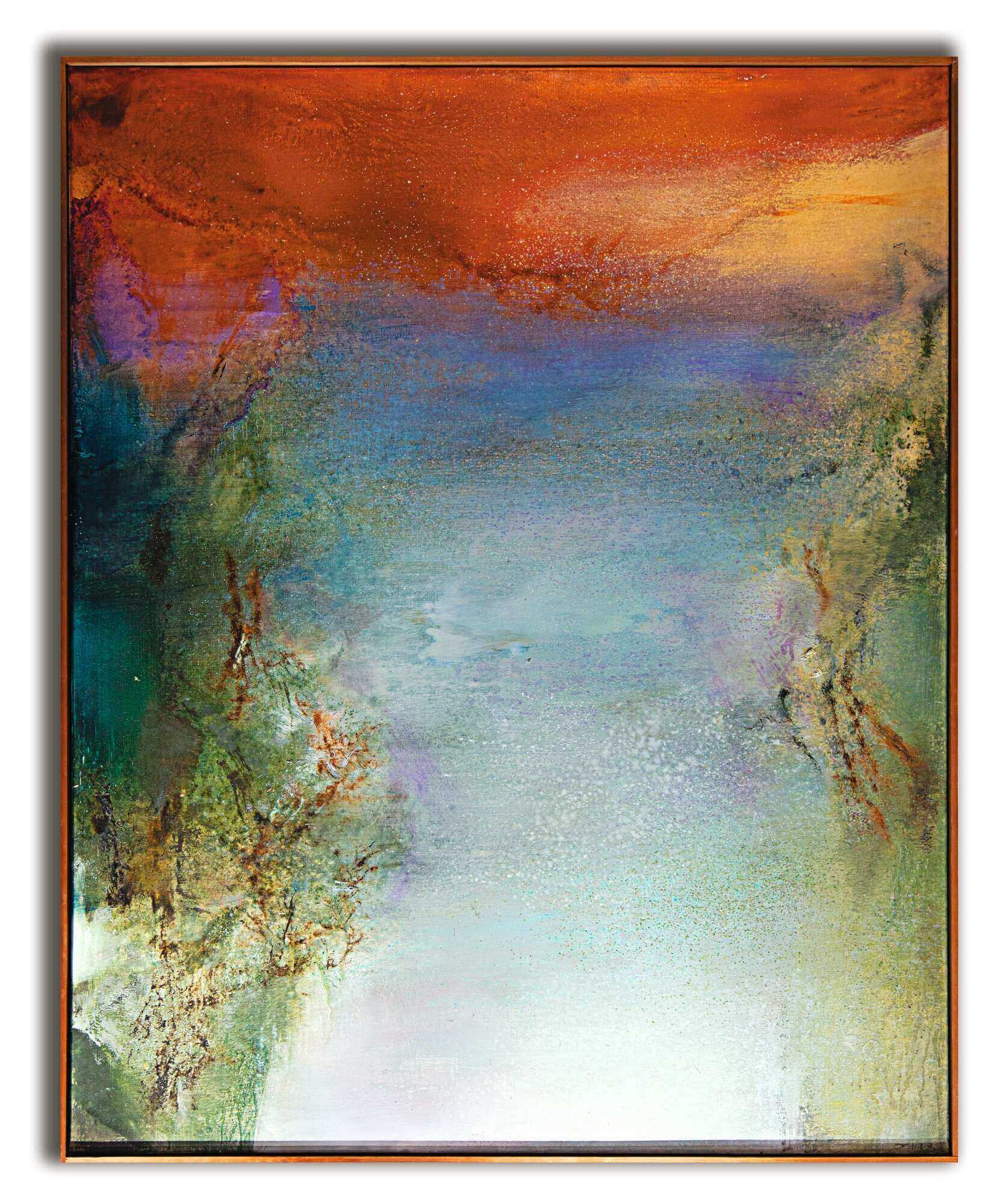 MODERN ICONS OF EAST AND WEST 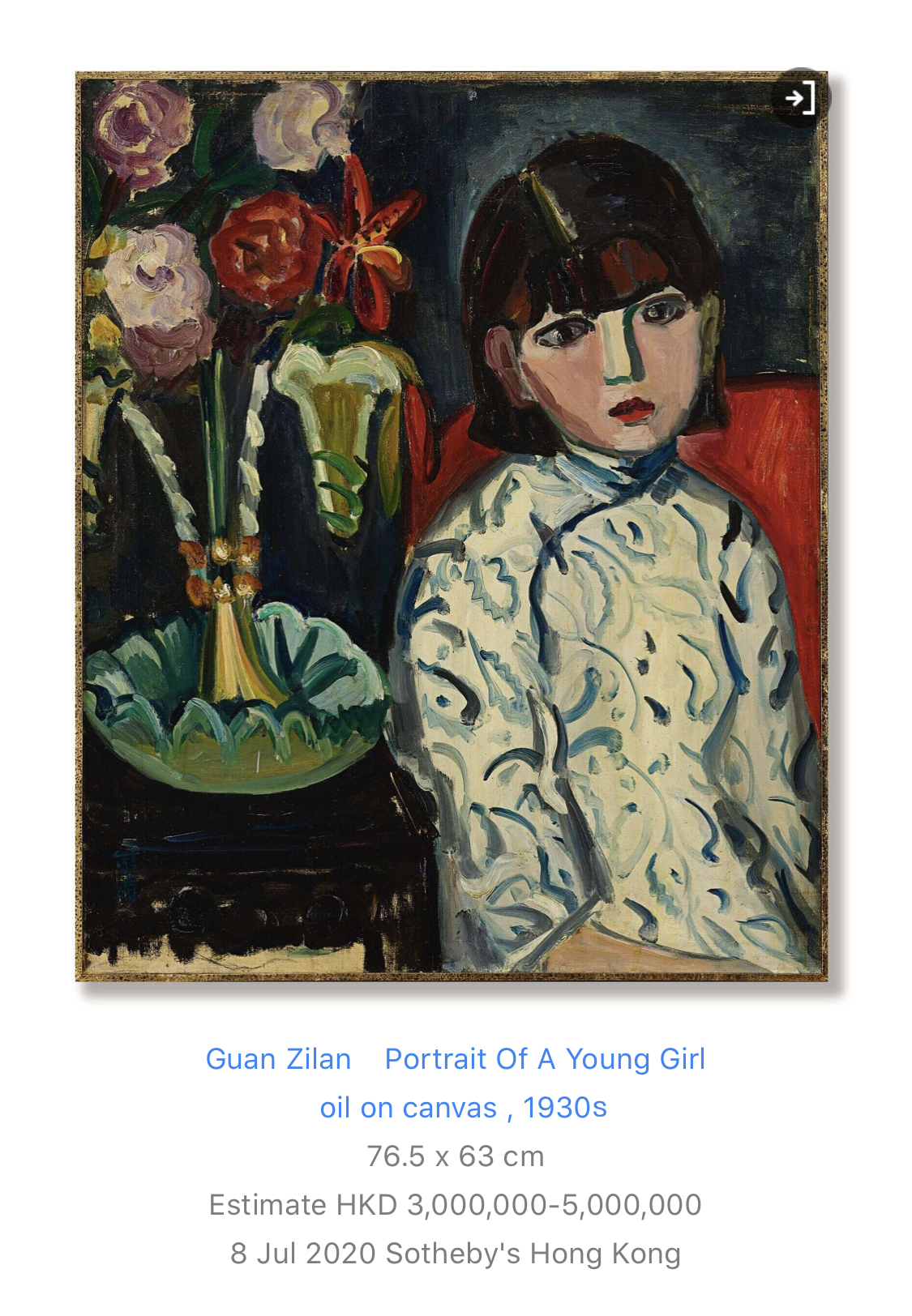 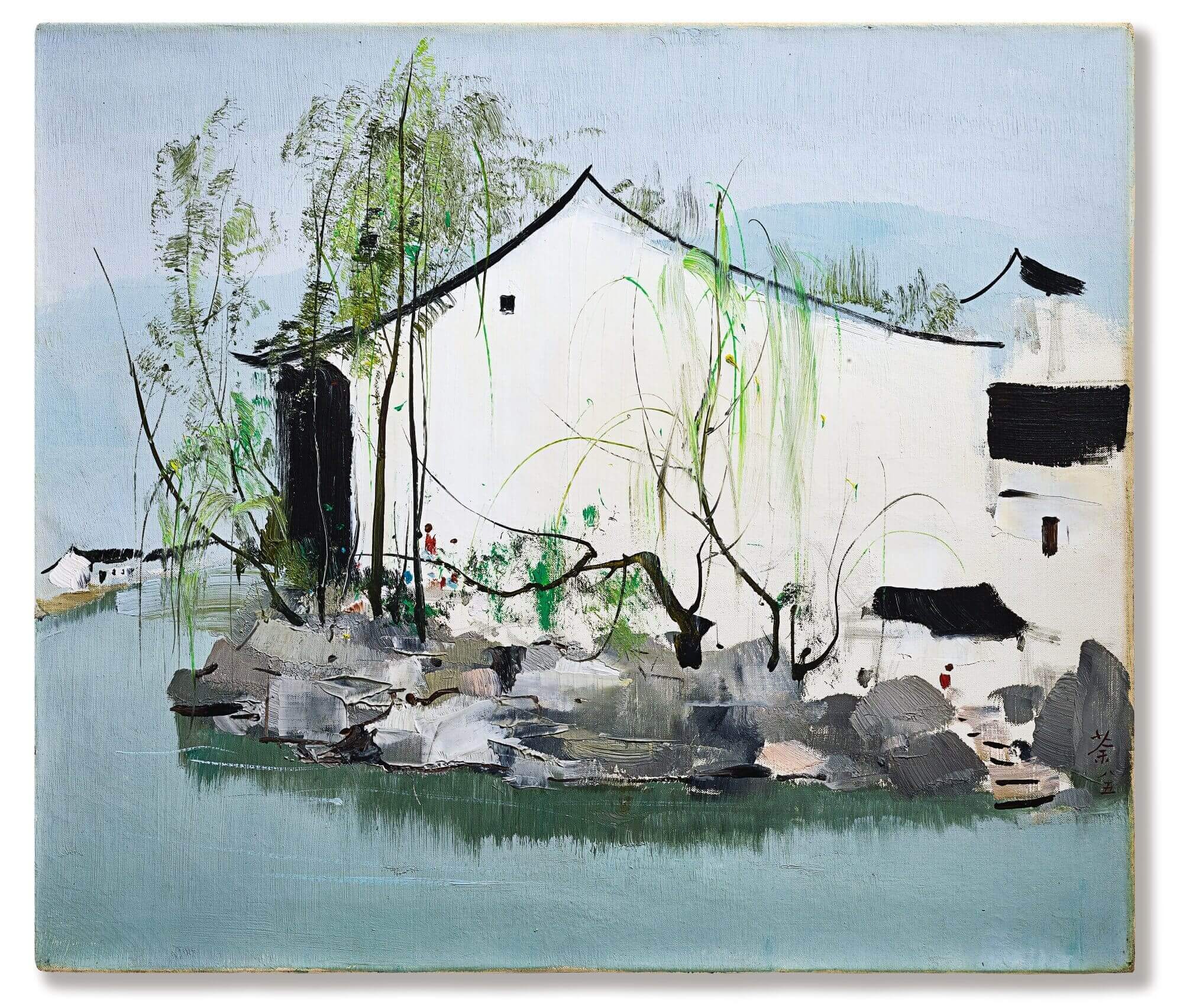 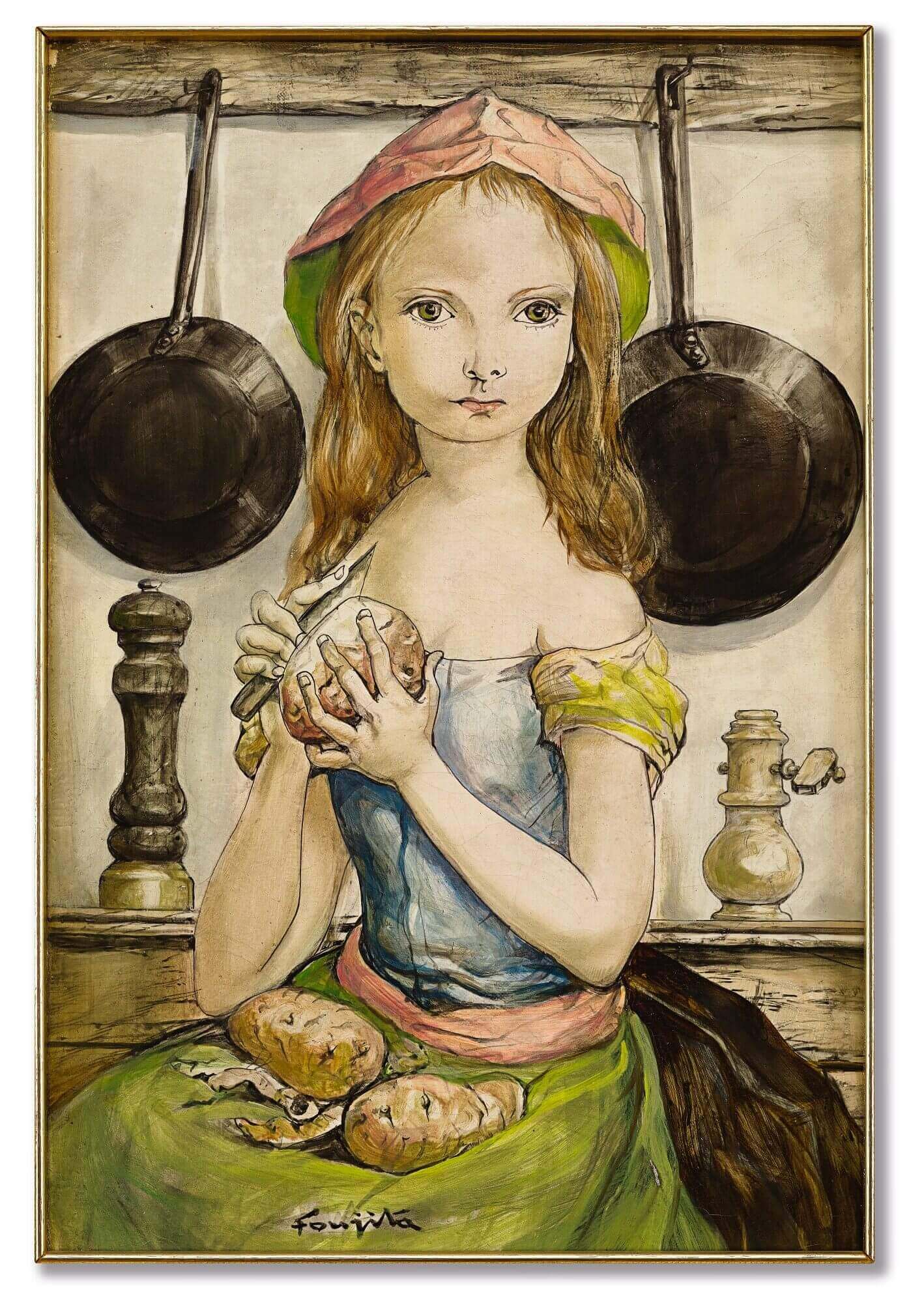 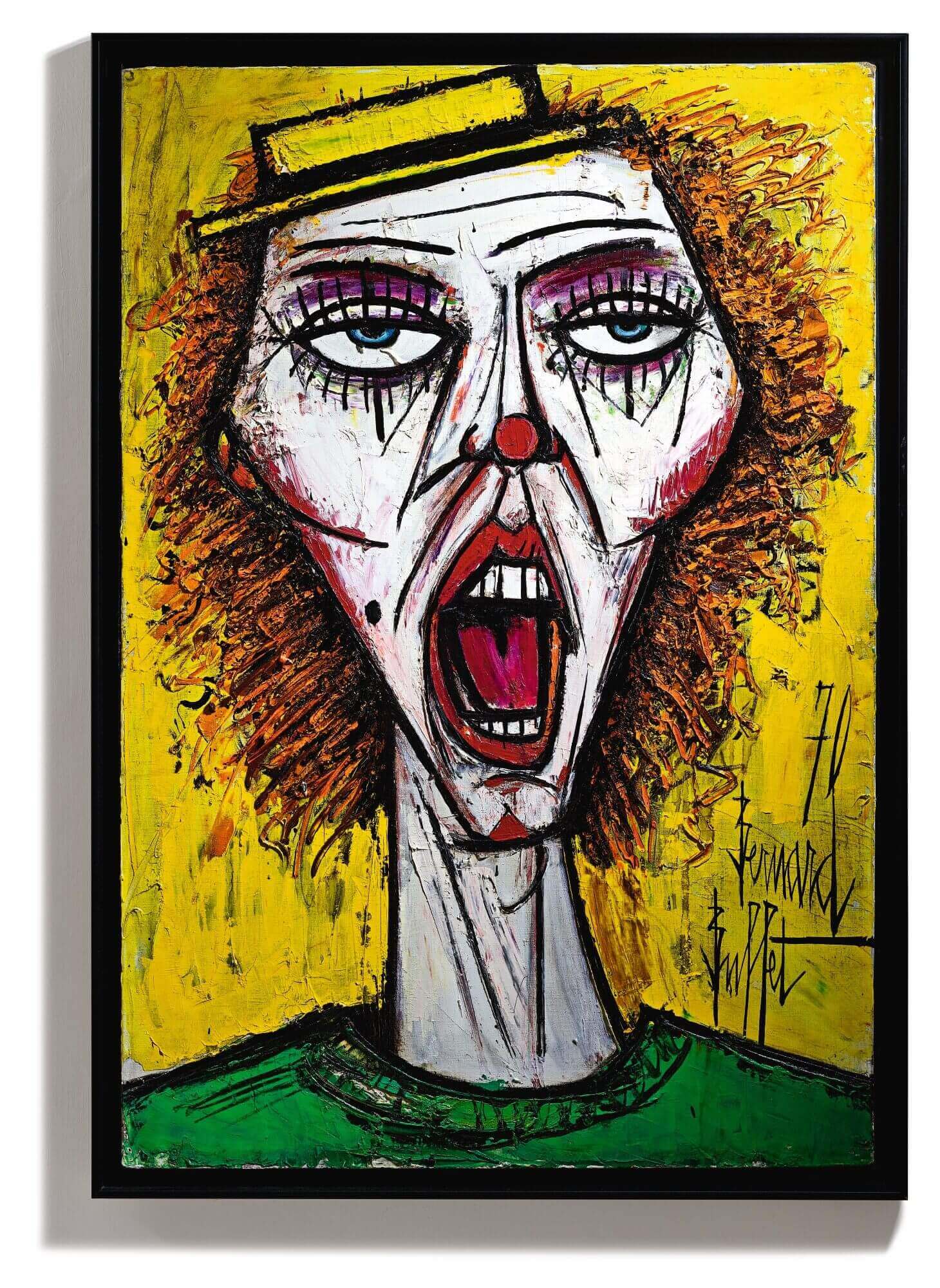 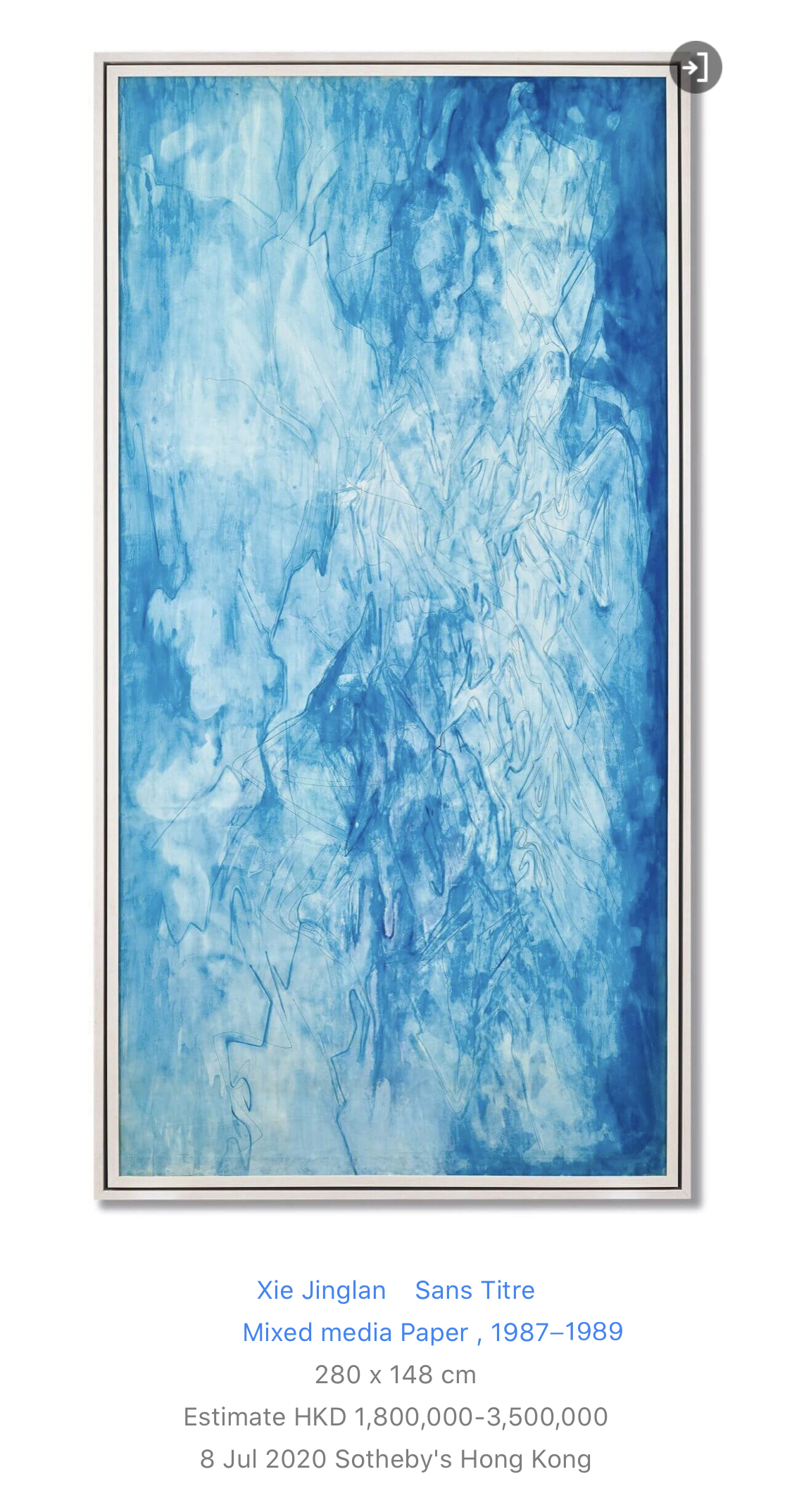 IN AID OF CORONAVIRUS EFFORTS ACROSS GREATER CHINA 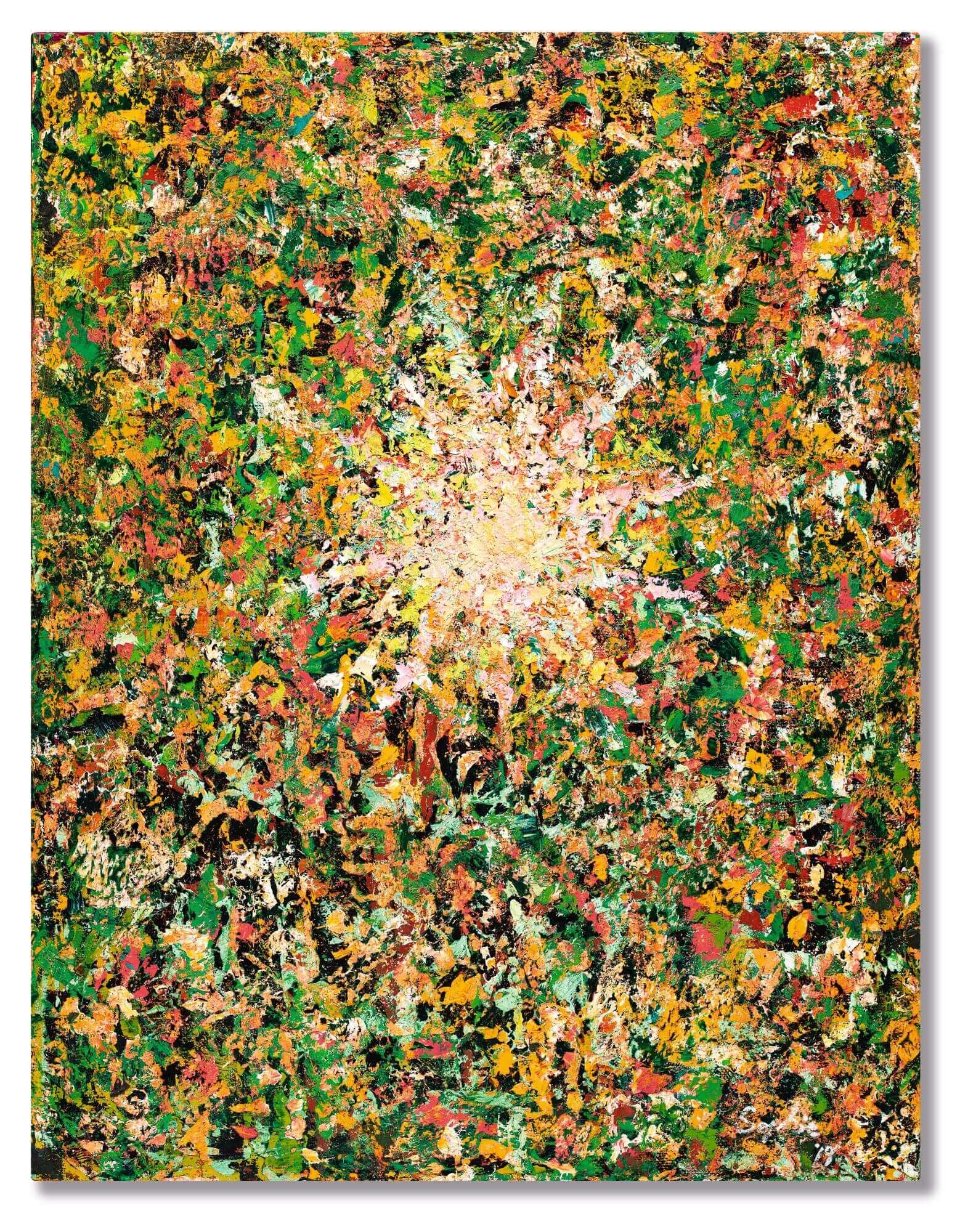 Sale proceeds will be donated to Taiwan Centers for Disease Control